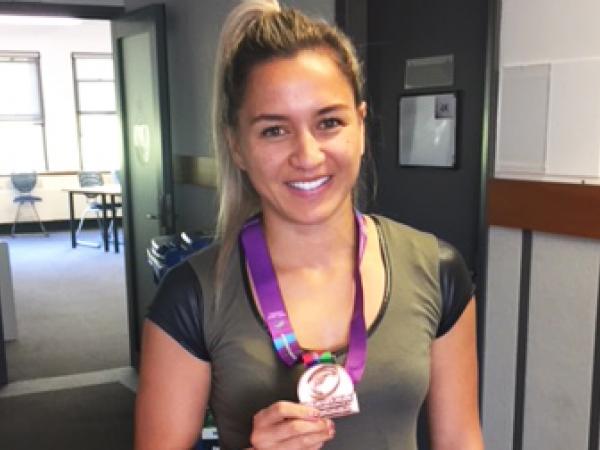 Police recruit Apii Nicholls-Pualau, who last year received a player of the year award with the Kiwi Ferns during the 2017 Women’s Rugby League World Cup, has added a bronze medal to her award collection.

This talented Rugby League player was able to take some time out from her initial training course at the Police College to play Rugby League Nines for the Cook Islands. Apii went to Moreton Bay in Queensland with the team – the Moana 9s – in February.

Over two action-packed days Apii says she played four games, including a semi-final against Australia (which Australia won 14 to 8) and a bronze medal match against Tonga. The Cook Islands Moana 9s won that match convincingly, 20-0.

Apii - a member of Recruit Wing 313, which graduates in May - picked up player of the tournament for the Cook Islanders and was also selected as one of the nine All Star Players to make the ‘World Team’, securing her position as number one fullback. She is described as a 'star fullback'.

“To be recognised for the hard work I try and put in on and off the field is very humbling,” says Apii.

“The event was exciting and I am so thankful to all my instructors, especially Sergeant Saxton, Sergeant Kerekere and Inspector Saunders, for supporting me in having the time off to compete in this event.

"They had so much trust and support in my ability to do good and they made it incredibly smooth for me to manage my studies, exams and Commonwealth Champs all together.

“It is a huge honour to be a part of New Zealand Police and I have enjoyed my time here at College. I believe the RNZPC definitely sets the platform for a better future and I can only hope my experiences will help me better engage with our community and set good examples.

"I can’t wait to make a difference and ultimately contribute to the ongoing success of making New Zealand the safest country.”

Previous
Being safe in a toga (and other O-week issues)
Next
Bacon, eggs and advice for tradies