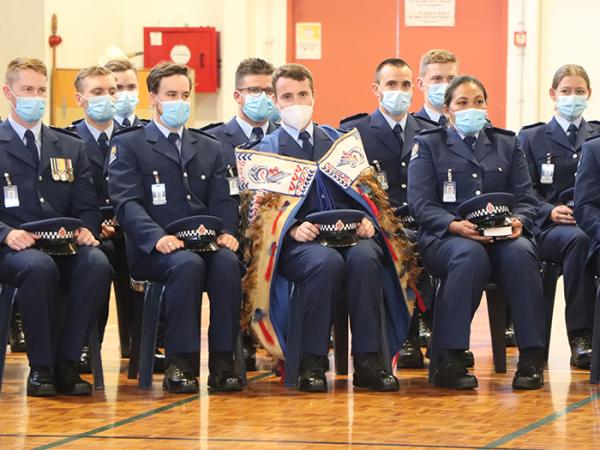 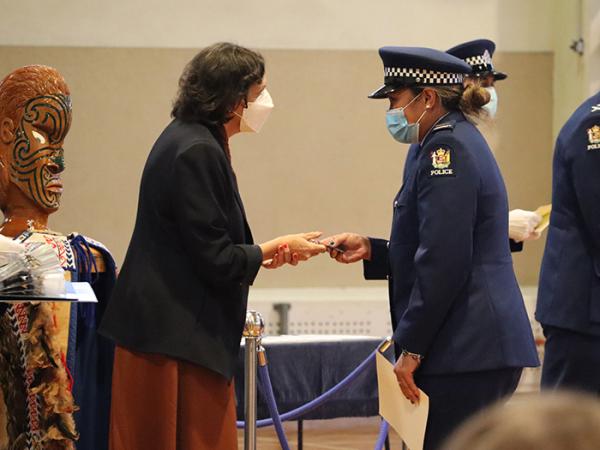 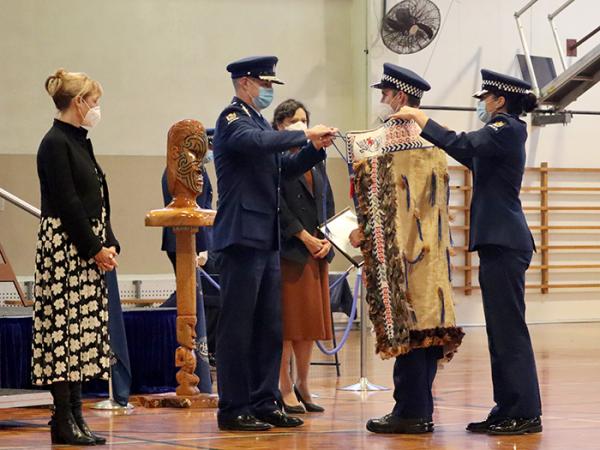 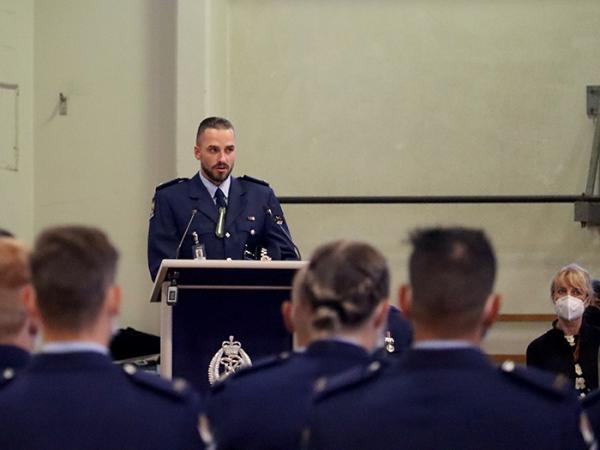 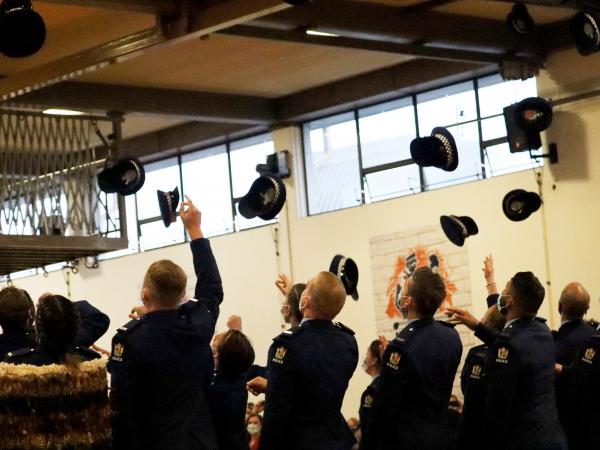 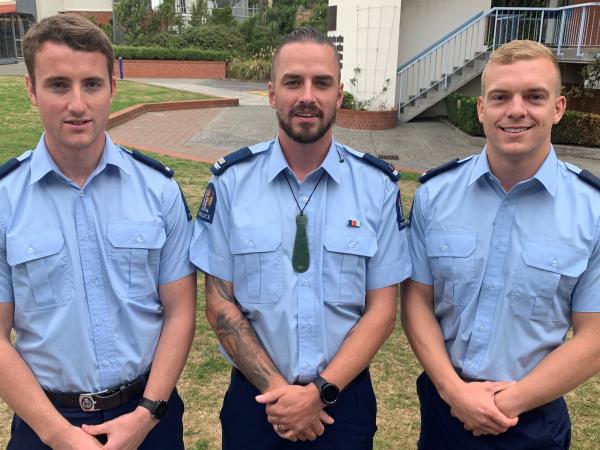 ​Seventy-nine keen new constables are ready to join the front line after graduating from the Royal New Zealand Police College on 01 April.

Volunteer firefighters are well represented among the members of Wing 352. Constable Monty Fiddymont is one who has been serving his community through his local Swannanoa, Canterbury, brigade.

He has been a volunteer firefighter from 16 years old and a volunteer ambulance officer since he was 18. Now in his early 20s, Monty says in those roles he would often work alongside police officers and soon realised policing was his perfect job.

“Both of the volunteer roles were amazing and allowed me to help people during their worst moments, making things a little better for them," he says.

“From those roles I quickly became aware of the work police do, and so this started my journey into this new career. An opportunity to work in the File Management Centre in Christchurch gave me a further insight into police work and cemented my dream of becoming a police officer.

“I’m joining the frontline because I want my life’s work to make other people’s lives a little better, a little safer, and our tamariki’s future a little brighter.”

Monty is posted to Canterbury.

A flame for policing was kindled from a young age for Constable Jenna Jones. She looked at joining after high school but decided she wasn’t quite ready. Instead she volunteered as a firefighter based out of the Cromwell Station while working in the building industry, both giving her the life experience and confidence she felt she needed before joining Police.

Jenna says she has loved fire fighting – “I love the feeling you get when you help people.”

Now, through policing, Jenna is looking forward to taking that a step further. “Not only helping people, but preventing harm too.”

Jenna has honed her fitness through competing in a variety of firefighter challenges.

“I’ve competed in waterways competitions regionally and nationally, I have done the Sky Tower, and plan to do it again in the next few years, and I also compete in the National Firefighter Combat Challenge – I currently sit in the top eight women in New Zealand.”

Those experiences definitely helped in her journey into and through recruit training, says Jenna, giving her the fitness and resilience to succeed.

Jenna is posted to Southern District. 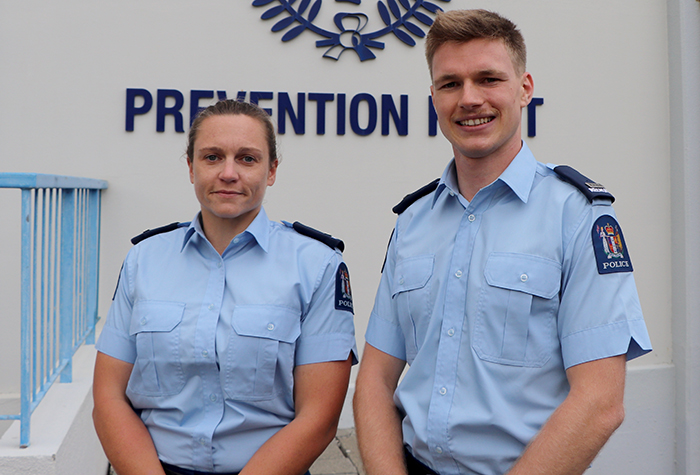 The pathway into Police has been clear for two of the graduates, Constables Allannah Tapara and Alex Sutton. They are the very first recruits who have come into Police via the Police Pathway programme.

The programme began in 2018 in Rotorua and gives year 13 school students the opportunity to understand the role of Police and gain insight into policing as a career, all while earning Level 3 NCEA credits. It is now offered in 95 schools across the country in partnership with Police and was recognised at the 2020 Diversity Awards NZ for the opportunities it presents for young Māori and Pasifika people to consider a career in Police.

Allannah and Alex say the programme, followed by opportunities to work as Police employees, set them up well for recruit training.

Allannah was one of the first graduates of the Police Pathway programme in 2018, receiving the top award for the course at Rotorua Girls’ High School. She then moved into a front counter support role at Rotorua Police Station, followed by a role in the Bay of Plenty File Management Centre.

“One of the most important aspects of the Police Pathway programme that I took away are our Police core values – they are now inherent to who I am as a person.

“The programme also gave a great introduction to the Police application process and supported me on how to achieve this.

“Through my roles in Police I was able to experience many parts of frontline policing first-hand, which further increased my desire to become a constable. That desire to join not only reflects my past experience with New Zealand Police, but also my willingness to serve and protect our communities.”

Alex undertook the programme at Heretaunga College in 2020 and then got to know the Police College well by working in a support role there.

He says he has always wanted to join Police, and having an uncle in the blue uniform proved to be a useful source of answers to his many questions as he worked out whether policing was a good fit for him.

“I think the Police Pathway class is super beneficial for students who have even just the slightest interest in policing," he says.

“It was a great way to delve deeper into how the Police operate, to learn about their history and their values.

“We got to do some pretty cool things like witness interviewing and visiting the Dog Training Centre and Police Museum – definitely the most exciting parts!

“My role at the Police College was the perfect way to put my foot into the door for my dream job.

“I got to meet a lot of the recruit instructors and staff who were all happy to answer my questions, and I was given some opportunities to help out as a role player in the scenarios that recruits do. Overall, I was able to build insight and gain a good understanding of Police values and how Police operate.” 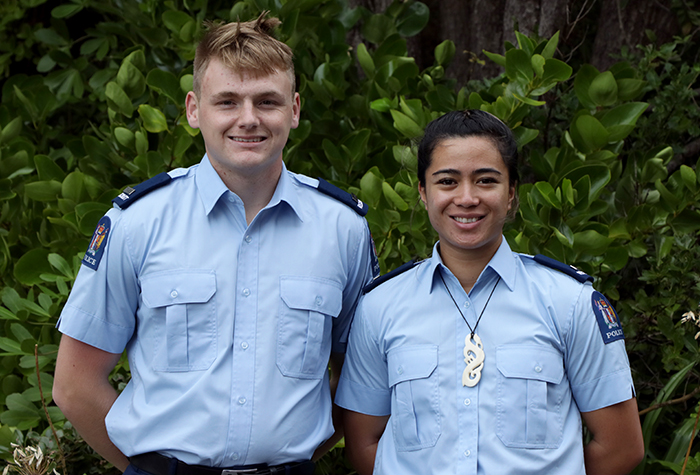 Milestone achievement for the first graduates who came to Police through the Police Pathway programme. Left to right, Constables Alex Sutton and Allannah Tapara.

Some people may do a double take when they see new Constable Dylan Buttar-Scurr on the job in Invercargill. Dylan, who received the Minister’s Award for first in wing, has an identical twin, Blake, who is also a constable in Southern District.

Before joining Police, Dylan completed a degree in accounting and finance and then gained his commercial pilots licence. Dylan wanted a rewarding career, so decided policing was it – heavily influenced by those family connections to policing.

“I’d heard first-hand through my family how exciting and rewarding the job can be, and I’ve seen them have the privilege of contributing to the Southland community in many ways, helping to keep the community safe. I decided I wanted to do my part too.” 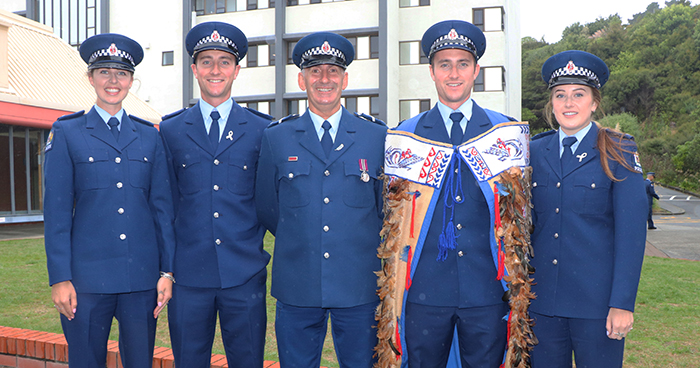 Andrew says he loved every minute of his career with the Army, but once he and his wife started a family he decided being away from them on deployments for long periods would be too hard on them all.

Still, he’s driven to serve so Police was an obvious choice.

“I think that my skills and experience will be useful. I'm here because I want to make an impact; I want my tamariki and the tamariki of my community to grow up feeling safe and heard.”

Andrew spoke at the ceremony on behalf of the wing, about the pride and honour they were feeling, and how the training “was designed to not only push us to our limit, but also force those limits to new horizons.”

“To my wing, I acknowledge that our journey has been difficult at times, but look at us now ... We are all the better for persevering through the challenges we have faced.

“I would not trade our time for anything less.”

Andrew is posted to Canterbury District.

Wing 352’s combined attestation and graduation ceremony celebrated not only the 79 graduates, but also the 3074 graduates since October 2017, the start of the 1800 boost to frontline staff numbers, which is expected to be reached by 30 June 2023.

Police Minister Poto Williams paid tribute to the efforts of staff throughout the organisation for reaching the 3000 milestone.

“To have achieved this incredible number of graduates in four-and-a-half years has come down to the hard work of the Recruitment and Initial Training teams in particular, but many others throughout the organisation and in all the 12 districts have contributed to this success.

“I thank you all who have put mahi in to achieve this result, for your resilience through trying times and for the expertise you’ve brought to your roles in developing such a large cohort of officers.” 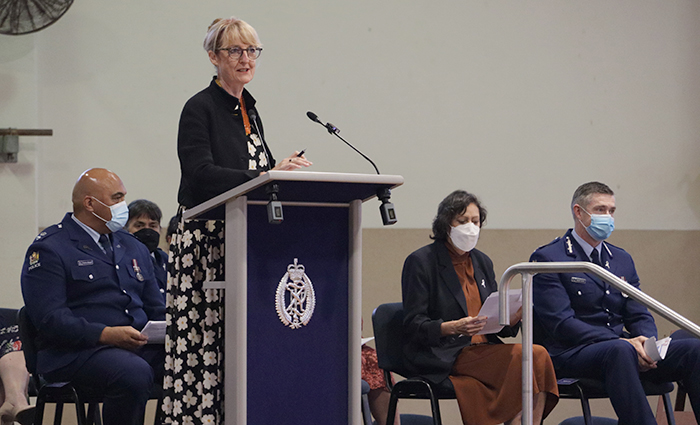 Wing patron Linda Clark told the new constables: "I will always be proud of you."

The wing’s patron is Linda Clark, a highly-regarded lawyer and a member of Police’s Assurance and Risk Committee. She attended the graduation and spoke about the many challenges the wing met during their training.

“They had to dig deep and they had to really draw on their resilience and the love and support that [their families] have given them over the years and the fantastic support they got here at the College to carry them through ...

“These people have done something incredibly remarkable. They have given up a lot of their freedoms to become people of service and to do good in their community.”

She spoke of how the districts and communities want their new constables to succeed and how the wing can achieve that.

“Be human, be empathetic, remember that you are part of the community you serve ...

The wing of 79 is being dispersed to districts as follows: