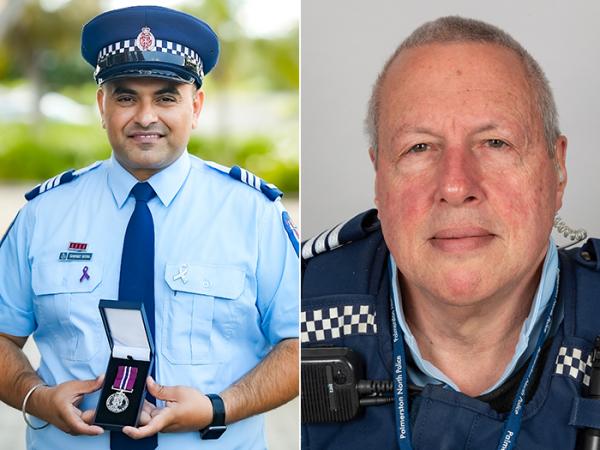 Two members of Police staff are today honoured in the Queen’s Birthday Honours for their services to Police and to their communities.

Commissioner Andrew Coster says the awards are well deserved for two officers committed to improving the lives of people in need of a helping hand.

“I congratulate Gurpreet and Andy on these awards and on the many achievements for Police and their communities,” says Commissioner Coster.

“They have both been leaders in their fields and committed to their work, often giving their own time to ensure we give New Zealanders the service they expect and deserve.

“Both are respected by members of the public and our partners.”

Gurpreet has worked extensively with South Asian communities, developing or helping implement projects such as Operation Dukan, in which Police worked with small business proprietors to improve their safety at a time of high offending against them, and in family harm initiatives.

Gurpreet says he’s privileged and honoured to receive the award. “I’m proud to work for an amazing organisation which is respected and achieves a lot with help from the community.

“This honour is for all those working to reduce family harm, including community agencies and counsellors working with victims, children and perpetrators to turn lives around.”

He also acknowledges the help, support and encouragement he receives from his family.

Andy has been involved in Search and Rescue since 2004. As well as participating in many local and national searches, he has spearheaded training for Police staff and LandSAR volunteers. This includes sharing his skills and time to programmes benefiting young people, especially in the outdoors, and on training people to use equipment which help find those at risk of wandering.

Andy admits he’s passionate about SAR but is quick to acknowledge the unstinting help from LandSAR volunteers, colleagues and importantly his own family.

“There’s been lots of interrupted family time because of call-outs. My wife and family have been very understanding, and so have the families and bosses of the volunteers.

There’s the thrill of coordinating searches, admiration for the physical endeavours of experienced volunteers prepared to be out in all elements, and the technical skills of pilots who know the testing Tararua Ranges as well as their own backyards.

“Finding someone alive is an amazing feeling, but sadly not all searches end this way.”

Life and death is finely balanced, he says, citing one Tararua search where a mountain runner was found severely hypothermic. Levin LandSAR volunteers were called out and experienced member Rob Bigwood was deployed to run ahead of the teams as the weather closed in.

Thanks to his skills and those of Amalgamated Helicopters pilot Jason Diedrichs from Masterton, plus a lucky break in the weather, the woman was plucked to safety.

His real rewards he says, are training and educating people about the outdoors, or in utilising tools like the Wandersearch programme which makes it much easier for search teams in urban areas to find people who have wandered away from home.

Their investitures will take place later in the year.

You can find more details of their achievements in their citation below.

Sergeant Gurpreet Arora has had more than 15 years' experience in frontline and ethnic services policing and currently works in Counties Manukau District.

In his roles as an ethnic liaison officer and coordinator in Counties Manukau, he became a significant point of contact for the South Asian community.

He initiated ‘Operation Dukan,’ a project in 2008/2009 which educated retailers to adopt simple methods to improve their safety, which was expanded across two other Auckland Police districts.

He was involved in setting up and expanding Gandhi Nivas, a perpetrator-oriented project to reduce family harm, and is currently working as Family Harm Partnership Liaison Officer for Gandhi Nivas.

He has worked closely with Hindu, Muslim, Christian, Sikh and other groups within South Asian communities to ensure their proper representation in the District and Area South Asian Advisory Boards of Counties Manukau Police.

He initiated the practice of observing religious and cultural occasions of significance at the Manukau Police Station, including Ramadan Iftar, Eid and Diwali. He has also worked on a new-to-New Zealand initiative for international students.

Queen’s Service Medal (QSM)
For services to Search and Rescue

Sergeant Andy Brooke has been in New Zealand Police since 1981 and has been involved with Search and Rescue (SAR) since 2004.

He has set up events, encouraged new members and run training courses in his own time. He has coordinated volunteers to join larger searches in Wellington, Whanganui and the Central Plateau.

He has assisted with national events and represents Central Police District at the national level in SAR matters.

He organised and ran bushcraft courses for the Manawatū Branch of the Mountain Safety Council between 2010 and 2015, having been a member since 2008.

He was a founding member of Outdoor Training New Zealand, which co-ordinates teams of volunteer instructors to deliver training to the general population and especially young people preparing for their Duke of Edinburgh’s Hillary Award expeditions.

He has been programme coordinator and gear custodian since 2015, a tutor in the Emergency Management Department of Tai Poutini Polytechnic since 2007 and an instructor for LandSAR Training.

Sergeant Brooke helped set up the Wandersearch programme in Manawatū, using radio tracking to locate people at risk of wandering.