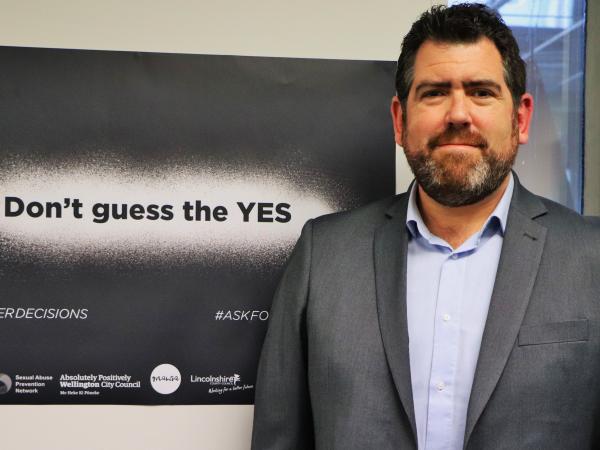 Last festive season, party-goers were encouraged to make #betterdecisions - this year they’re being reminded not to guess the yes.

Wellington Police launched an awareness campaign in December 2017 that urged party season revellers to think about the impact alcohol has on decision-making and consent. The #betterdecisions campaign included four promoted Facebook videos and was well-received.

Police have teamed up with Hospitality New Zealand and Wellington City Council to get the initiative off the ground, with support from Sexual Assault Prevention Network, Victoria University of Wellington Students' Association and Massey University Students’ Association.

To spread the message, billboards are going up around the CBD and 250 'Don’t Guess the Yes' T-shirts have been distributed to hospitality staff.

As well as raising public awareness around consent, the campaign shows people working in the hospitality industry what they can do to protect patrons.  More than 50 businesses have signed up so far.

Training is part of the campaign, giving hospitality sector staff the skills and confidence to identify problematic situations, and empowering them to help patrons who might be at risk. This includes 'Ask for Angela', an internationally recognised system for patrons who feel unsafe to discreetly ask staff for help.

The campaign will be shared on social media this week and posters will be put up in bars around the city. The posters are dual-sided, with the bar-facing side displaying reminders of how bar staff can prevent harm or intervene in a possibly risky situation.

Acting Detective Senior Sergeant Ben Quinn, who heads the team behind the campaign, says the initiative is innovative and unique.

“This concept is designed to prevent adult sexual assault offending and victimisation by encouraging people to change their attitudes around sexual consent and alcohol consumption," says Ben.

“Working together we’re aiming to educate the public on consent, foster positive attitudes and keep people safer by providing hospitality staff with the necessary skills to identify and help anyone that could be at risk.

“We all want Wellington to be a safe place to socialise, with vibrant nightlife. With this initiative we’re sending a clear message that sexual assault and abuse won’t be tolerated in our city. ”

Previous
One in a millennium
Next
Eagle remembered, 25 years on