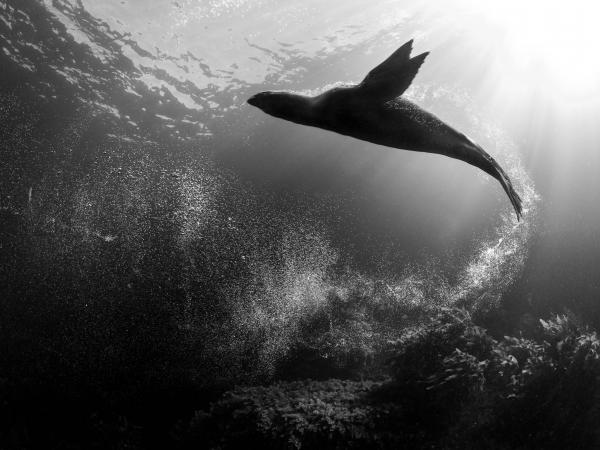 An image of a fur seal showing off has landed Auckland forensic photographer Constable Alex Stammers in the finals of the New Zealand Geographic Photographer of the Year competition.

Alex, who away from work specialises in underwater photography, was diving off the Poor Knights Islands in August when the seal approached.

“The seal came up from below – I was photographing it as it went past and it did this somersault right in front of me, just showing off,” he says.

Alex had seen reports that divers were getting good encounters with seals wintering in the Poor Knights so decided to try his luck on a diving excursion on a midweek day off.

He says seals are becoming increasingly used to sharing the water with divers at the Poor Knights and are unconcerned in their company. “They were coming up to each diver and checking us out.”

The winner will be announced on 13 December. In the meantime, Alex hopes Police colleagues will vote for his photo in the ‘people’s choice’ category, which runs alongside the main competition: click here to vote on the New Zealand Geographic website.

Alex began underwater photography in earnest in 2008. Two years ago his photo of a juvenile fish sheltering inside a jellyfish (inset) – also taken off the Poor Knights Islands - was a finalist in the same competition.

For the technically minded, he photographed the seal using a Nikon D800 camera with a 15mm fisheye lens in a Nauticam camera housing.

Alex’s photo is one of 65 finalists in the New Zealand Geographic Photographer of the Year competition, which seeks to reflect New Zealand’s environment and society.