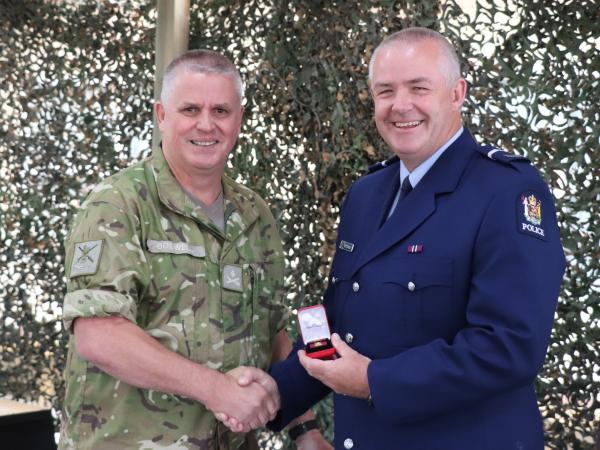 Waiouru Senior Constable Bruce Francis is the latest recipient of a New Zealand Chief of Army Commendation – an award rarely presented to a non-military member.

Bruce, who has been with Police 19 years and began policing in Waiouru in June 2013 has maintained close ties with the Army – partnering with them for social and community matters and investigative support.

Major-General Boswell spoke about Bruce’s commitment to the community before he presented Bruce with his commendation that included a certificate and a clasp.

“It’s clear that Bruce has had a really positive influence on the Waiouru community in his time here. He has established excellent relationships at all levels particularly with Army but also with the wider community,” says Major-General Boswell.

Bruce was nominated for the award by an Army staff member and says it is a real honour to receive it.

“It’s the ultimate recognition of policing by consent. To me it shows the style we are using is the right one for the type of community we are in,” says Bruce.

“Receiving this award has made me really feel like part of the Army family and I want to do my best for my family.”

Whanganui-Ruapehu Area Commander, Inspector Nigel Allan says the commendation is an awesome endorsement of Bruce’s commitment to the Waiouru community and to the quality of service he delivers.

“Bruce has truly immersed himself in the community and really does go the extra mile. His relationship with the Army brings significant benefits for both organisations and the wider community. His deep connection has clearly enabled a high level of trust and confidence and is an example to us all – Ka rawe Bruce!”

Bruce has also been a key player in the local Combined Adolescent Challenge Training Unit (CACTUS) programme for the past five years, and him and colleague Shane are always on hand to support community activities including the Army School holiday programme.

“It’s about embedding yourself in a community and the more you put in the greater the rewards — when you ask for help you get it.

“Waiouru is a unique environment and the things I learnt on the Police Community Constable Course some years ago have payed dividends in what it takes to be part of the community.

“I want to thank the Army and the Waiouru community for their unfailing support, it really means a lot,” says Bruce.

Senior Constable Francis has been stationed at the Waiouru Police Station for a number of years. During this time he has acted as liaison between local and military communities in Waiouru.

Through his presence in the area he has built up a special relationship between the military and the local community especially with the staff from the Waiouru Regional Support Centre. He is often seen patrolling the Waiouru Military Housing Area and through this has built up a rapport with the local military community. Senior Constable Francis always attends functions and community activities at the camp and visits the local camp school and community centre.

During the lockdown period, Senior Constable Francis continued his patrol and liaison within the camp and the wider military community. His visible presence, clear communication, and willing cooperation, during his continued patrolling reassured those in the area.

During the second round of increased COVID-19 restrictions, Senior Constable Francis maintained that visible presence and he actively re-educated some of the local youth, who were attempting to take advantage of the lockdown restrictions.

Senior Constable Francis not only quickly identified the culprits but then took them to task for their previous actions.

Always loyal, Senior Constable Francis works in a diligent manner and with boundless enthusiasm to support the Waiouru military community.

This coupled with his organisational ability and professional expertise has enabled him to become a valued member of the community.

Although not a member of the Army, Senior Constable Francis displays the Army’s core values: Tū Kaha – Courage, Tū Tika – Commitment, Tū Tira – Comradeship, Tū Maia – Integrity, and showcases the special relationship between the New Zealand Police and the Military community both in and around Waiouru.

Senior Constable Francis is a worthy recipient of the Chief of Army’s Commendation.