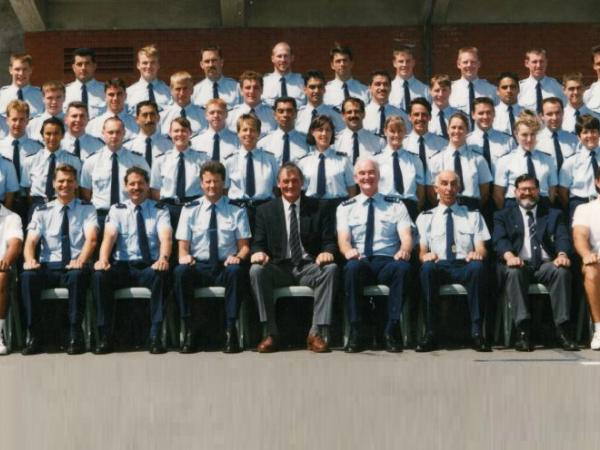 Rugby legend Sir Brian Lochore, who died on Saturday, is remembered as a recruit wing patron with a commanding presence and great mana.

When the 48 members of Wing 138 graduated in 1993, their patron Sir Brian told them he felt welcome and “very comfortable” at The Royal New Zealand Police College (RNZPC).

In his message to the wing he said he was particularly impressed with their teamwork.

“Considering the variety of your past occupations and backgrounds, it is remarkable how well you work together.”

One of the wing’s instructors, Retired Sergeant Alan Richards, remembers Sir Brian as an inspirational speaker who had a presence that commanded attention.

“When he spoke, everyone listened,” says Alan.

Several Wing 138 members are still in Police, and describe Sir Brian as a patron who was down-to-earth and an excellent role model.

“I remember being quite awed when he shook my hand at the graduation parade,” says Kristen Braae, a Taskforce Support administration officer at Police National Headquarters (PNHQ).

“It was great that we had such an outstanding person for our patron – not just because he was an All Black, but because he had such a wonderful mana.”

“Brian was always quite happy to remind Colin that he’d got his patronship for Wing 138 – but it took Colin until Wing 225,” says Andrew.

As well as being a wing patron, Sir Brian contributed his leadership and team-building skills to Police leadership training programmes, and is said to have been a great supporter of police in his Wairarapa community.

“It’s been said before but it’s true that Sir Brian Lochore was a true tōtara in every sense of the word,” he says.

“Sir Brian addressed and attended a whole day of my Sergeants Qualifying Course. He left a lasting impression on me about the principles of leadership and really role-modelled what it means to be a great leader."

“Sir Brian epitomises the ideal patron," says Scott. "He was someone who had vast experience as a coach, mentor and leader, and was a gifted communicator. Police is lucky to have patrons of Sir Brian’s calibre.”