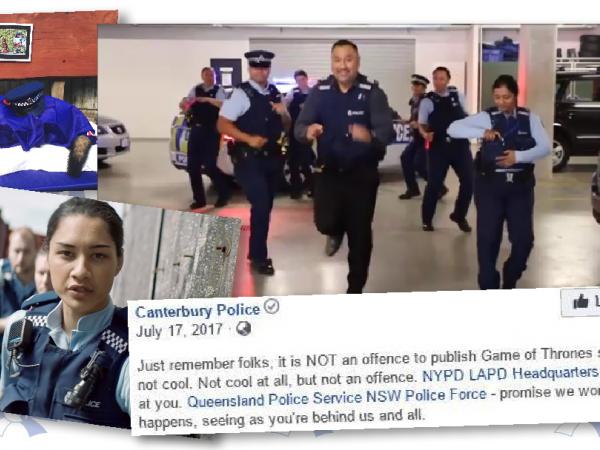 The social media platforms that have made some of our people online stars around the world have chalked up their millionth follower.

“This demonstrates the amazing level of interest in what police do,” says Social Media Manager Simon Flanagan.

Among Police’s social media global blockbusters are the Running Man Challenge and The World’s Most Entertaining Police Recruitment Video, which both attracted views and shares by the million and became talking points worldwide.

At other times our platforms have carried more sombre content, such as the photo of slain Wellington police dog Gazza draped in a Police flag which broke hearts around the world.

The national page has the most followers, while Canterbury has the most of the district pages (90,000) – helped by inventive and popular content such as its Game of Thrones-themed posts.

It’s not all police dogs and puppies (or dragons and direwolves, in the Canterbury case) – though they always do well.

Social media has proved effective for operational purposes, such as finding wanted and missing persons and providing prevention advice. Other uses include regular Q&A sessions on the recruitment Facebook page for would-be recruits.

“Police has a reputation as one of the best organisations in New Zealand for use of social media,” says Simon.

“We get asked pretty regularly to speak at events - and other government departments and business want to know about what we do.

“I’d like to acknowledge the great work that’s happening around the country – a huge part of this success is down to people inputting lots of good stuff in their districts.”

Simon says over the past 12 months more districts and areas have been asking about setting up new profiles.

“There’s always demand for us to go out and train people and set up district accounts. Some of our best content comes out of districts so it’s great that more staff across the country want to be involved with social media.”

Previous
Mamas on patrol
Next
The changing face of Police