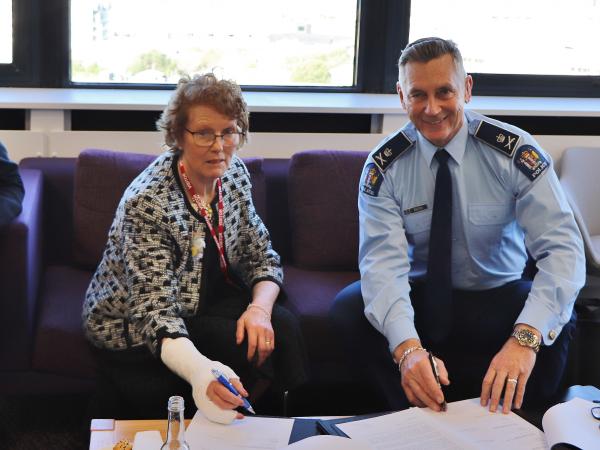 The foundation set up after the murder of Sophie Elliott is being wound up, but her legacy lives on with a Police commitment to continue the work her mother Lesley started nine years ago.

“Today is about passing the mantle of fantastic work into safe hands," Commissioner Mike Bush said at a handover ceremony at Police National Headquarters last week (5 August). "We are going to carry this work on."

“It’s a funny time,” Lesley said. "It’s so many years since Sophie died but it’s still quite raw. It’s been an amazing journey – this wraps it up in a good way.”

Thanking all those in Police who worked to prevent partner abuse, she noted “an incredible number” of emails, text and Facebook messages from Loves-Me-Not participants, thanking the Foundation for its work.

Bill O’Brien, a former police officer, endorsed Lesley’s words of thanks. He particularly mentioned the late Inspector Brigitte Nimmo, the initial Police champion of the programme, who early on advised the foundation that oversight would come from then-Deputy Commissioner Mike Bush.

“It’s hard to measure prevention," Commissioner Bush said, accepting ownership. "But you should be safe in the knowledge that many young people are safer because of this programme.”

He said the Foundation’s work was right in line with Police’s commitment to Prevention First. “We want to get ahead of this, not turn up afterwards.”

The Foundation will be formally wound up on 4 October 2019.