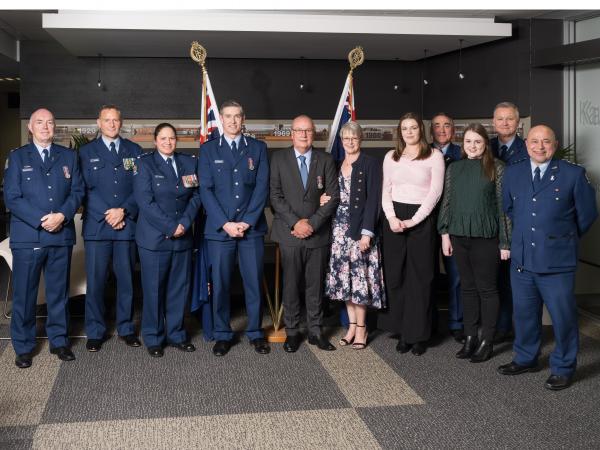 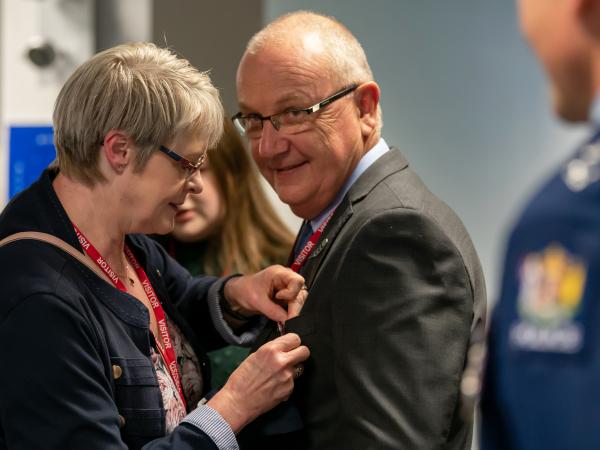 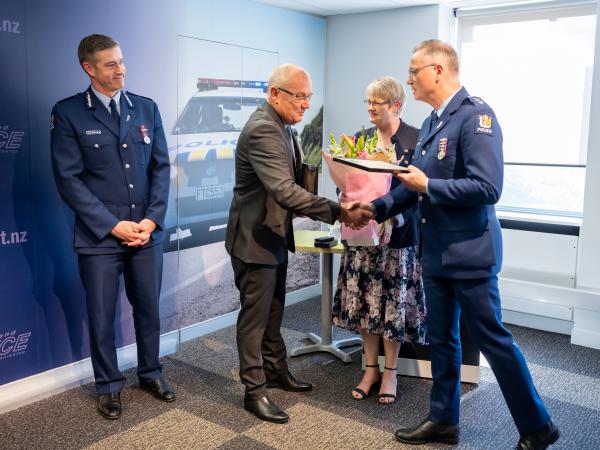 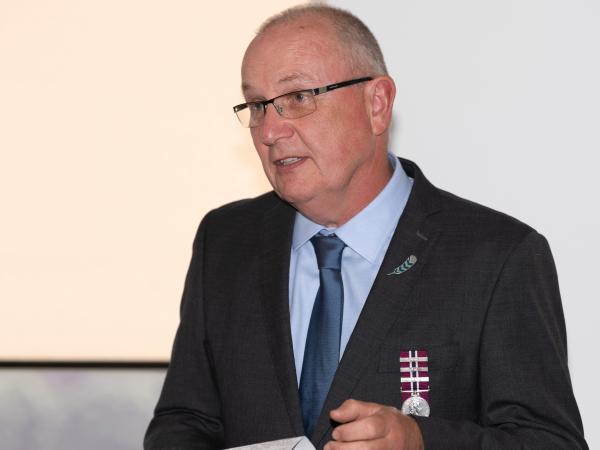 “The Meritorious Service Medal is the highest recognition that I’m able to give as the Commissioner of Police.”

Commissioner Andrew Coster warmly welcomed the group that gathered last week to celebrate the awarding of only the 19th Police Meritorious Service Medal (MSM) to Olaf Jensen, who retired from Police in October 2020.

Among those in attendance were Olaf’s proud family - wife Jo and daughters Nicole and Charlotte - and, fittingly, a strong contingent of Southern support, including District Commander Paul Basham.

A southerner through and through, Olaf left his home on Stewart Island to join Police in 1981. The 39 years of service that followed were spent in the South Island.

The MSM is awarded for ‘notable dedication, innovation and commitment to Police and the communities they serve’, something Paul noted during Olaf’s presentation.

“I think the great thing about the MSM is that it’s a recognition of a continuity of service over a lifetime, really," said Paul.

“The mana of this award reflects the depth and width of your contribution over nearly 40 years of service.”

That service began during one of New Zealand Police’s most challenging periods. Fresh from training in 1981, Olaf was sent to help during anti-Springbok tour protests outside Parliament.

After these early efforts, it was back down South for Olaf, who served as a constable in Invercargill. He would go on to be based in Winton, embedded within the Western Southland community.

The geography in this part of New Zealand meant Olaf’s Search and Rescue experience was regularly put to the test. He led a number of high-profile SAR operations, including the response to one of New Zealand’s worst maritime disasters, the capsizing of the fishing boat Easy Rider in the Foveaux Strait.

Olaf’s dedication to the Southern communities he served, and the respect he earned for his tireless work, was brought up at the medal presentation by Otago Coastal Area Commander Inspector Matenga Gray, who is currently seconded to PNHQ.

“The best assessment of your character comes from iwi Māori in Murihiku who just hold you in such great mana,” said Matenga. “That, to me, was a reflection of who you were as an individual… your name still reverberates around the district due to your impact in that area.”

In 2014, Olaf was asked to temporarily step into the role of Otago Lakes-Central Area Commander by then Southern District Commander, now Commissioner, Andrew Coster. It was a position he would hold for six years.

“I really valued the character you brought to the role,” said Commissioner Coster at the presentation. “You were so hugely respected in terms of the staff around the district.”

One such member of staff, who was also present to see Olaf receive his medal, is Inspector Paula Enoka, Olaf’s successor as Otago Lakes-Central Area Commander.

“I don’t call you ‘Olaf’ very often, because it’s very hard for me to see you as not my boss any more,” said Paula. “The great team in Lakes that I’ve inherited is only there because of the hard work that you put in.”

The list of experiences Olaf clocked up over his 39 years of service is something to behold, and even included multiple brushes with royalty.

He was deployed to Waitangi when a baby Prince William visited with his parents in 1983, and many years later he managed security for one of the legs of William and Kate’s New Zealand tour. He also worked on Prince Harry’s visit to Wanaka in 2015.

However, it was the outstanding and consistently excellent level of service over the entirety of Olaf’s career that the Commissioner acknowledged during the medal presentation.

“This medal is awarded for service that, in my opinion as the Commissioner, is outstanding and worthy of recognition, because it demonstrates innovation as an exemplary model for police employees, brings significant benefit or prestige to New Zealand Police, or demonstrates the application of skills or performance far beyond that expected given the employee’s rank, qualifications or experience.

“You comfortably tick all of those boxes, Olaf.”

Receiving the medal, Olaf was typically humble, paying tribute to the many colleagues he worked with over the years, the organisation as a whole, and his family for their constant support.

“Policing is about teams, not individuals,” he said. “This medal is not only about me but a reflection of the people I’ve had the privilege to work with in keeping the community safe.

“My family, you understand how very proud I am today. The honour that’s been bestowed on me reflects that total support that you have given me. You’re very much a part of this recognition today.”