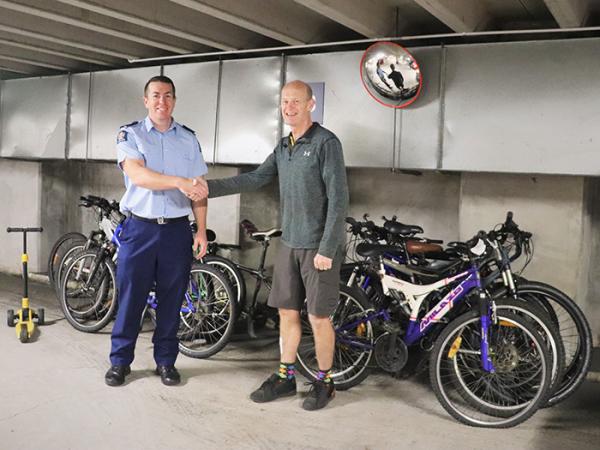 This week 13 bikes and a scooter left the Auckland City Police hub to be rehomed thanks to a new initiative with Bike Auckland.

Our stations house thousands of exhibits each year and some of these include unclaimed bikes, and sometimes scooters too.

“I was approached by Bike Auckland about this awesome initiative and immediately wanted to get on board," says Senior Sergeant Shaun Richardson, Project Coordinator: ACD Exhibits Store.

"Having seen the number of unclaimed bikes pile up and either get thrown out or auctioned, I knew there must be a better way of disposing of them. The value and goodwill to the community far outweighed any nominal amount of money that we would get at auction.

"After much discussion and approval from our District Commander, a MOU was signed, and the wheels were set in motion."

Extensive background research took place before the bikes were donated, though no matches were found in the Police database and therefore the donation could go ahead.

“We know that many people would like to ride a bike but can't afford to purchase one," says Bike Auckland's communications manager Charmaine. "So Bike Auckland are delighted to announce an understanding with the Auckland Police that will see the bikes that the Police recover but that are not claimed within three months, donated to people who aren't able to access one.

“Previously bikes that weren’t reunited with their owners were disposed of so it's great to see the bikes going to a good cause."

Bike Auckland is a non-profit organisation and will use its networks across Tāmaki Makaurau to identify communities where the bikes can be of most use.

While this initiative is in its early stages, it’s hoped that it will become a standard approach across Tāmaki Makaurau.