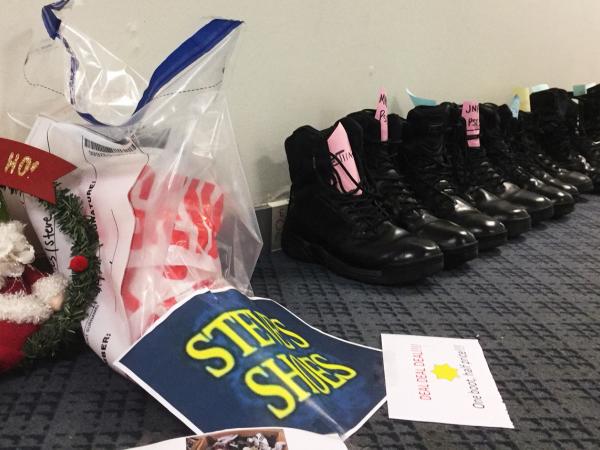 You’ve heard of Christmas stockings… but for staff in Mount Wellington, Auckland, it’s all about boots this year.

Public Safety Team staff were encouraged to polish their boots and leave them lined up overnight, in keeping with a German Christmas tradition. Yesterday they found their efforts rewarded with candy canes, lollies and other Christmas treats.

More than 30 members of staff left a boot out, with the encouragement of Area Executive Officer Bettina Borchert-Kenyon and Workplace Assessor Senior Constable Cherie Nelson.

German children polish their shoes on 5 December to show they have been good and St Nikolaus visits overnight and fills the footwear with goodies.

The date is the anniversary of the death of Nicholas of Myra, a fourth-century Greek Christian bishop who was known for distributing gifts secretly and whose legend has lived on in the form of Santa Claus.

“You only leave one shoe out because you don’t want to appear greedy,” says Bettina, who is German and practises the tradition at home with her family.

Some people took the exercise very seriously, leaving a boot out for several days after going off shift. Senior Sergeant Steve Samuels, whose boot was the first out, won a special prize for best decorated boot, colleagues having added items to it over a number of days.

Honourable mentions also went to Sergeant David Hoeft, who left out a ‘summer boot’ - a jandal - and Cherie, who selflessly polished boots for off-shift colleagues who might otherwise have missed out.

“PST staff don’t get a lot at this time of year - apart from work - so we try to do something nice for them at the end of the year,” says Cherie. “It seems to have found favour so maybe we’ll do it again next year.”