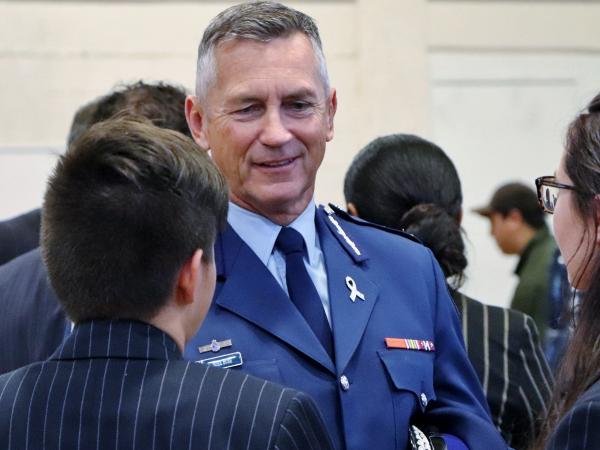 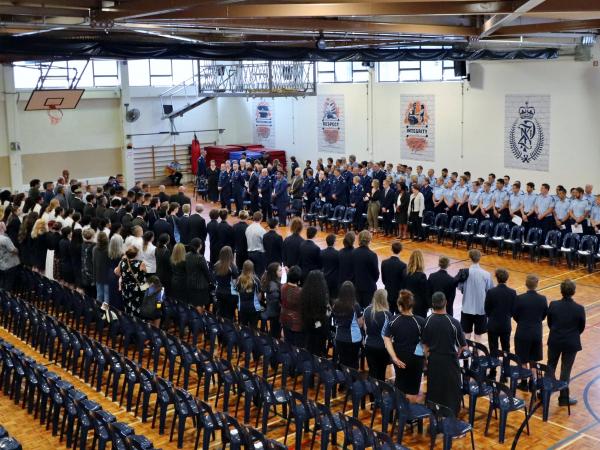 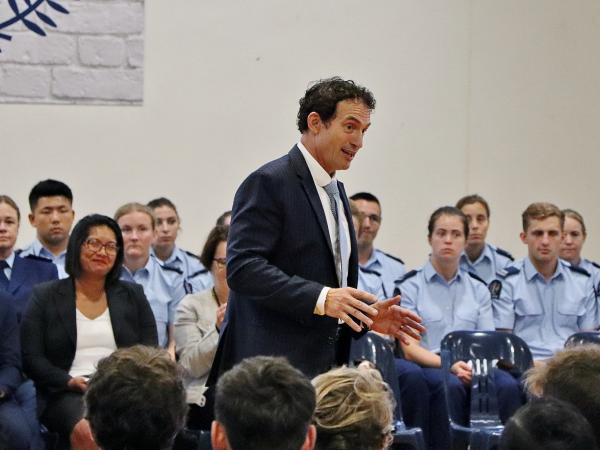 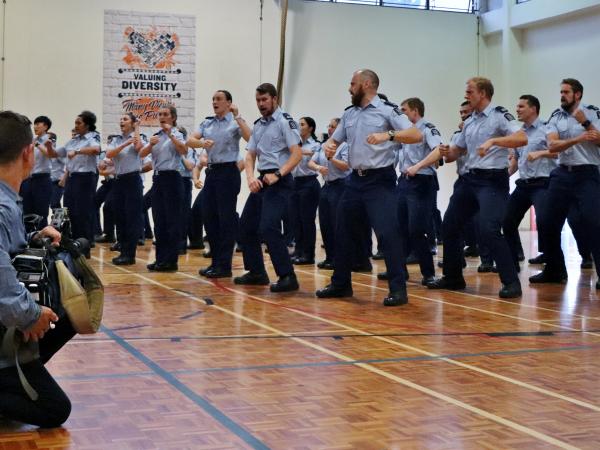 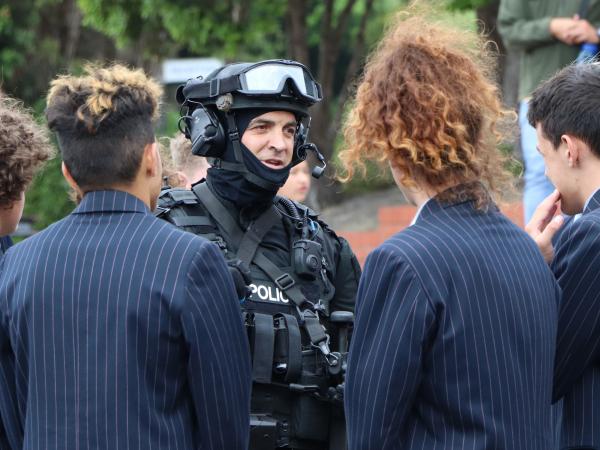 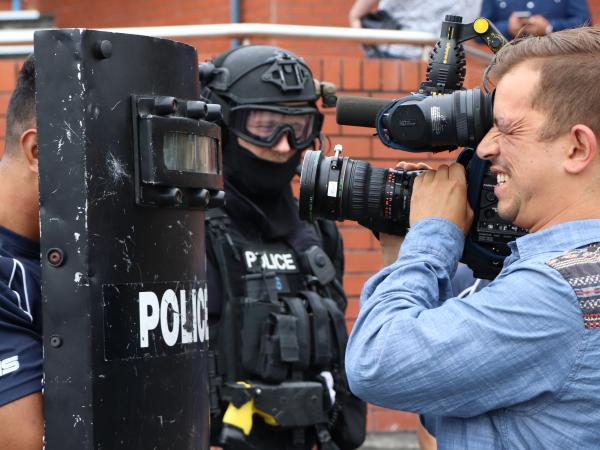 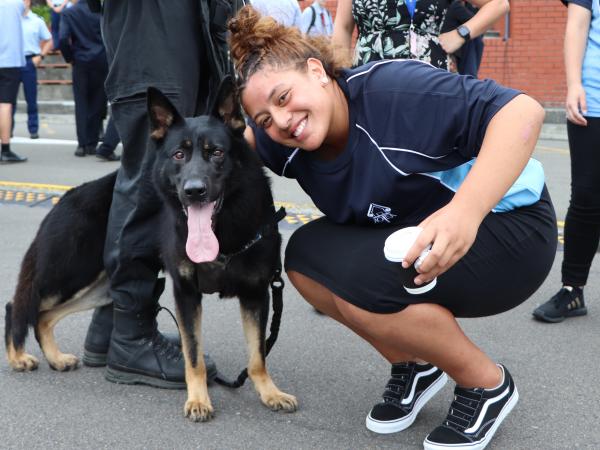 From the introductory waiata to the drama of an AOS exercise, students from three high schools were welcomed to the Police family in style.

Kapiti, Mana and Aotea Colleges have signed up to the Introduction to Police Studies NCEA course, pioneered by Rotorua Boys’ and Girls’ High Schools last year in association with the Royal New Zealand Police College (RNZPC).

The milestone was marked with a pōwhiri attended by students, school and Police staff and iwi at the RNZPC, with VIPs including Police Minister Stuart Nash, Police Commissioner Mike Bush, Minister and local MP Kris Faafoi and Kapiti Mayor K Gurunathan.

The Year 13 course is a new option for the three schools after a positive reception from the Rotorua students who took it in 2018. Each school has between 20 and 30 students on the course.

Commissioner Bush told the students the course contributed to Police’s mission to be the safest country.

“What we’re doing here is to create a qualification for students to pave their way into being a member of New Zealand Police and contribute to our aspiration to make New Zealand the safest place,” he said.

Minister Nash said under Prevention First police worked with communities to prevent crime and keep people out of the justice system. “It can be the most rewarding career you can ever have,” he said.

Sarah said Rotorua students she spoke to loved the course and the opportunity to serve their schools and communities, develop leadership and teamwork, learn about Police values, and more.

She said their whānau spoke of seeing them become more responsible, reliable, focused and resilient – “they also said their kids have stopped fighting with their little brothers and sisters and now made their beds and tidied their rooms!”

After the pōwhiri, the students watched a demonstration by Wellington Armed Offenders Squad and were then able to talk to squad members about life at the pointy end of policing - and meet police dog Moose.

“It’s great to be able to engage with local Police hopefuls at a school level,” says Acting Senior Sergeant Chris Kerekere, of the RNZPC – one of the architects of the course.

“This will provide a significant career pathway for those who are interested in policing and who want a taste of what it’s all about.

“It’ll help them understand what Police is trying to achieve, as well as being useful for the recruitment process, such as helping them train for the physical entry requirements.”

The course covers the context of policing in New Zealand, Mātauranga Māori and Police, leadership in Police, diversity of policing within the community, emotional intelligence and other topics.

As well as the theory component, students will practise and be tested on the elements of the Physical Appraisal Test (PAT), which includes a 2.4km run, press-ups, grip strength and a vertical jump.

Successful completion of the course gains students 25 NCEA Level 3 credits. It also incorporates the content of the 12-week distance course required to be completed by all RNZPC entrants – meaning they will not have to complete this separately as part of their application.

However, they must still meet the other entrance requirements.

What the school principals say

Aotea already offers students a forensic science course in collaboration with its close neighbour the RNZPC and is looking forward to extending that partnership.

“Lots of students are interested in the range of skills embodied in the course – fitness, service to the community and the other options Police provides.

“We don’t see it as necessarily a recruitment tool – it’s more about service to the community and opening the door for other possible pathways, including a pathway to Police.”

Mana College, Porirua, will run the Police programme alongside its existing Service Academy, a programme for 20 Year 12 and 13 students which “helps students develop themselves within the values of the New Zealand Army.

“The Police course fits really well with that. It’s also a really great example of integrating the curriculum – instead of students doing stand-alone subjects like English or maths, this blends elements like physical education and social science.

“That has a lot of positive benefits for students. It places an authentic framework around learning, instead of it being about abstract concepts. That’s a big part of our school curriculum.”

“This is a great opportunity for the kids. We’ve got plenty of kids interested in Police or the services generally as a career. For them it’s a great link and a great way to get a start.

“For us, we’re interested in developing a service ethic and leadership amongst the students. The nature of this course fits really well into that.”

One student is travelling from nearby Paraparaumu College to join the 26 Kapiti students taking the Introduction to Police Studies course.