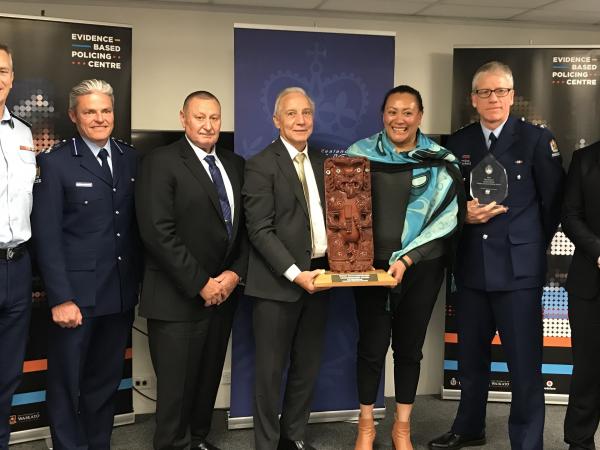 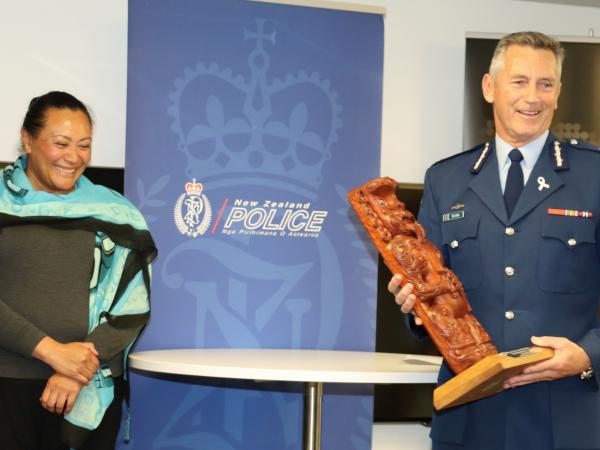 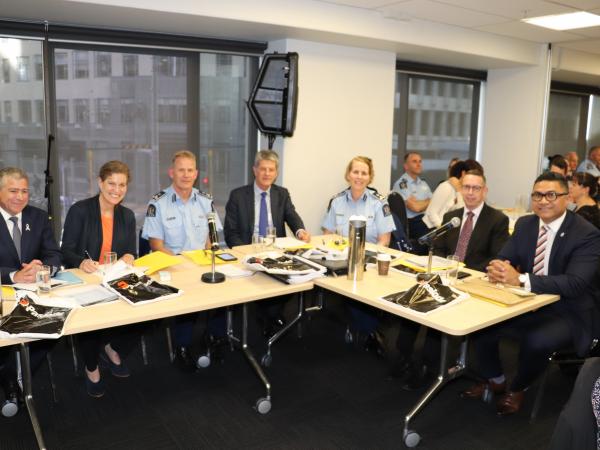 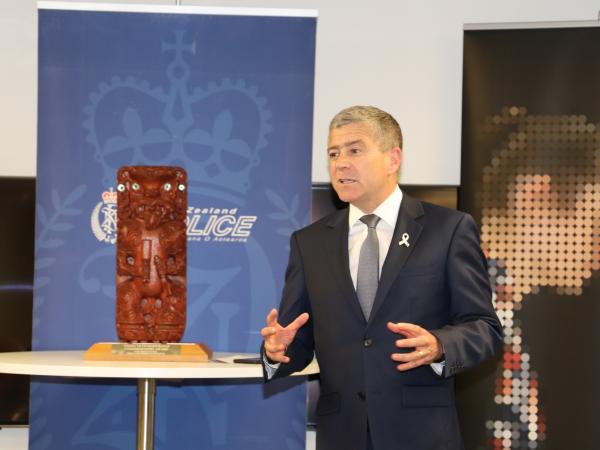 Home > News > Ten One Magazine > Top of the EbPOPs

An initiative in which Police partnered with iwi to support communities affected by a large-scale drugs operation has won the Supreme Award in the 2018 Evidence-based Problem-Oriented Policing (EbPOP) Awards.

Kua hīkina te kohu - ‘to raise the mist’ - saw staff from the National Organised Crime Group (NOCG) and Bay of Plenty District engage with the community before termination of Operation Notus, a strike against Mongrel Mob offending in Kawerau.

It was one of six prevention initiatives which made it to the final in Wellington yesterday (17 October). It also won the award for Excellence in Achieving Collective Impact.

The termination of Operation Notus saw around 360 Police staff deployed to Kawerau to shut down methamphetamine supply and other offending.

Leading the presentation at the final, Detective Senior Sergeant Lloyd Schmid, of NOCG, said they had to take account of the history of police involvement in the area.

Police met Tūhoe, Tūwharetoa ki Kawerau and other local community leaders before the termination in March, forging a “true and trusting partnership” against the gang activities which were causing huge damage in the town.

To minimise the effect of the police activity, a social services hub was established at Tūhoe headquarters for displaced families. Local marae and doctors were put on standby.

During the termination in March, Armed Offender Squad members wore blue uniform instead of the usual black and Police staff provided referrals to treatment providers for people with addiction problems.

The engagement was repeated when a smaller termination targeted dealers who were trying to move into the town. On neither occasion did any information leak out before the terminations.

Reported crime in the area fell 34 percent after the operation, with marked reductions in dishonesty, drugs and violence offences. Local feedback has been overwhelmingly positive, says Lloyd.

Tūhoe and Tūwharetoa leaders took part in the presentation, providing a ringing endorsement of the process. “In 170 years we’ve never been shown that degree of confidence,” said Tūhoe CEO Kirsti Luke. “Trust and confidence is a beautiful thing.”

“The National Organised Crime Group worked hard with the Bay of Plenty Police District and local iwi to ensure we could support the community, both before and after the operation,” he said.

Commissioner Mike Bush said all the EbPOP finalists underlined the pride he felt in being a member of New Zealand Police.

“All of the entries were examples of the absolute passion and emotion that Police and their community partners bring to their jobs.”

He said the Supreme Award winner was a great example of partnership, respect and trust.

“You haven’t just done everything you can to drive a safer community in Kawerau, but you demonstrated how we’ve changed as an organisation,” he said.

“Trusting the community, trusting iwi, days out from a termination – it had never been done before, but to be trusted we’ve got to give trust.”

The finalists ranged from engagement within the closed Gloriavale community, to improving the safety of seafood gatherers, to helping change disciplinary approaches within Tongan families (summaries of all finalists below).

The winners in the four award categories were:

The EbPOP awards highlight prevention initiatives in which Police staff identify an issue and apply measures based on evidence of what works, in partnership with other agencies or individuals.

Opening the final at Wellington’s Vodafone Centre - which houses the Evidence-Based Policing Centre - Police Minister Stuart Nash said the Government’s $300 million investment in Police would enable more of that kind of innovative work.

“You are at the forefront of the drive to make our communities safer and to tackle the complex issues that generate crime and the harm that goes with it,” he said.

“It’s been a fantastic afternoon,” said Deputy Chief Executive Service Delivery - and host for the day - Mark Evans, closing the event. “The quality of the work has been genuinely and truly uplifting.”

Ten One will report in detail on the award winners over the coming weeks.

Partnership with Tuhoe iwi to provide support to affected communities and build and maintain trust and confidence in Police after termination of Operation Notus, targeting large-scale methamphetamine and cannabis distribution by the Mongrel Mob around Kawerau.

Impacts include reduced reported violence and offending and a significantly reduced gang presence in Kawerau, resulting in the community feeling safe and renewed trust and confidence in Police.

Canterbury  District - You Matter to Us Wellbeing Team

Police and the Ministry of Education co-led a team of 18 partner agencies to reduce social harm in Linwood East, Christchurch.

The team identifies vulnerable children to ensure they participate in early childhood education and have access to health and social services. Children and whānau now have a sense of wellbeing, belonging and connectedness with their culture and can hope to achieve their potential.

Gloriavale residents living inside the closed community and moving outside the community were identified as being vulnerable and at risk.

The community and water safety experts were consulted; culturally effective education and beachside advice helped the at-risk group learn about water safety. Water-based emergencies have fallen and improved beach etiquette has helped the relationship between visitors and locals.

In 2016 a significant increase in child protection cases involving Pasifika families saw police partner with the Tongan community, Oranga Tamariki, and the Ministries of Pacific Peoples and Social Development.

With construction booming across Tāmaki Makaurau, Waitematā District identified a trend of tool thefts from sites and tradies’ vehicles.

A partnership with businesses helped foster a prevention mindset and make stolen tools harder to sell with, among other things, police engraving tools for free. Despite an 18 percent increase in building consents over this time, Waitematā recorded only a nominal rise in related offences.