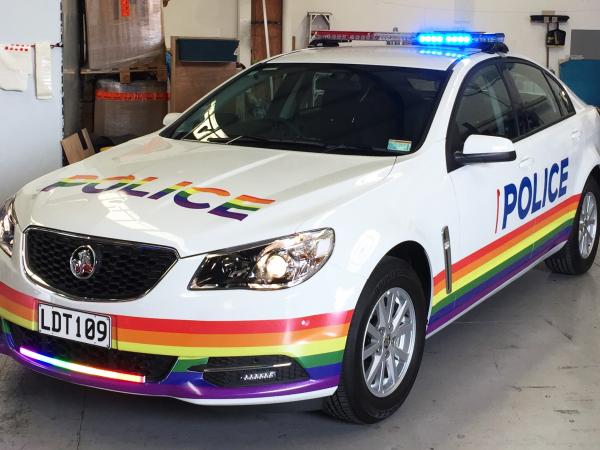 In front of a live TV audience, Police today unveiled its latest weapon in the battle to win hearts and minds.

The rainbow-themed – but fully operational - police car will be a feature at rainbow events in Auckland and beyond over the next few weeks.

Inspector Tracy Phillips says the Rainbow Pride car will play an important role in building and maintaining relationships with vulnerable communities whose trust and confidence in Police is traditionally low.

“There’s a very real need for Police to reach out to rainbow communities, whose members are over-represented as crime victims but often lack the confidence in Police and the judicial process to come forward,” says Tracy.

“This car is a very visible symbol that New Zealand Police exists for all our communities. We’re saying ‘Here we are, you can trust us’.”

The car is a Holden VF Commodore sedan, equipped to the same standard as any frontline police car. It will carry the rainbow design for a month before reverting to the more usual Police livery.

“We’ve seen how the Pirihimana car quickly became a great point of contact between our officers and our Māori communities,” says Tracy, Rainbow Connections Diversity Liaison Officer for Tāmaki Makaurau.

“We hope this car will become the focal point for similar conversations with members of rainbow communities.

“One of our core values is Valuing Diversity. Like uniformed Police staff taking part in the Pride parade, we hope the car reassures those communities and demonstrates the great diversity in our own ranks.”

Its first public appearance will be at the Big Gay Out on Sunday. The following Saturday (17 February) it will feature in the Auckland Pride Parade. A week later, it Is planned, it will be at Out in the Park in Wellington.

Previous
Nau mai, haere mai to Police
Next
Selfies and celebration at Waitangi 2018