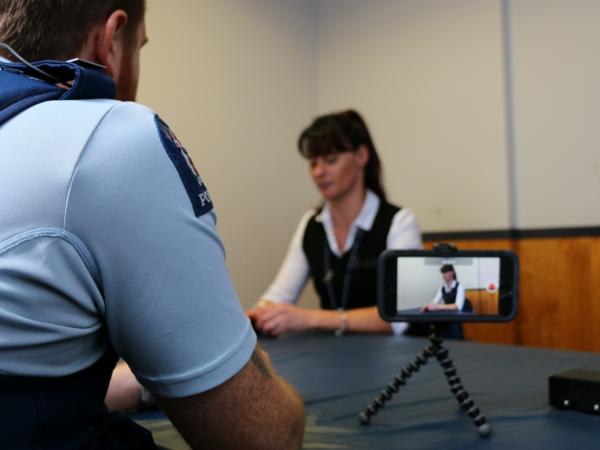 Counties Manukau Police will video statements from some family violence victims in a pilot which starts today.

The idea worked well and received positive feedback from staff and victims during a proof of concept in Central District, though a District Court judge eventually ruled such evidence inadmissible as evidence in chief.

The Ministry of Justice has now updated the Evidence Regulations to take account of technological changes.

Victims will benefit from an expected increase in early guilty pleas, and by not having to relive their entire experience in court.

“The average time Counties Manukau staff spend at family harm events scenes is 76 minutes. A good deal of that time is spent taking statements from victims,” he says. “Compare that with making a five-minute video.

“A video statement is 100 percent the victim’s own words. The compelling nature of those videos is outstanding. We’re hoping to achieve a higher percentage of guilty pleas, which will result in less time for victims and police in court.”

Family violence cases are less likely than other offending to be resolved early, and bring a lower conviction rate. There is also much longer between arrest and resolution – 228 days against an average 86 days in Counties Manukau.

Ross says of the first 41 cases involving videos taken during the proof of concept, 38 were resolved through guilty pleas, after an average 56 days.

“It’s about having a robust prosecution file and giving defence teams early access. We’d rather not have to go to court and put victims though that experience.”

The six-month pilot starts in Central Area (Manurewa) today, and on 17 July in West Area (Otahuhu). Staff will capture statements at the scene using an app on their Police iPhones and upload them to evidence.com. Training is under way.

The initiative is part of the Safer Whanau work stream of ‘The Safest Country – Policing 2021’, Police’s new transformation programme.

It also involves Justice Sector partners. Victim Support and Women’s Refuge have been briefed so they can better support victims.

The pilot launch today was supported by a ministerial announcement.

Previous
Lehi and the Lions
Next
Merit Awards - June 2017