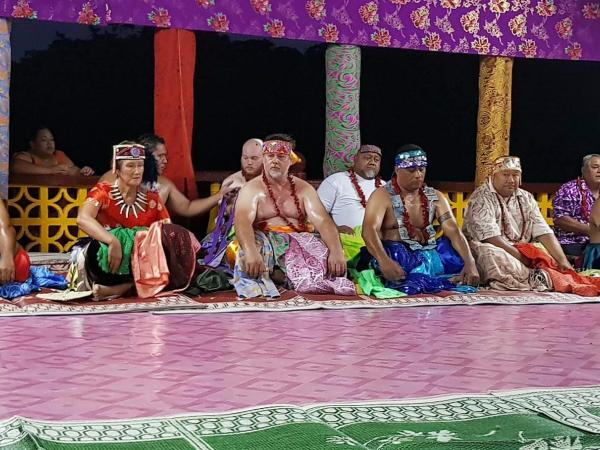 Home > News > Ten One Magazine > Wear your title with pride

She was preparing to receive the Matai (chiefly) Samoan title ‘Lauano’, passed down to her from her paternal uncle and her grandfather before that.

"It was a very special day," she says. "It was hugely significant for my family, past, present and future. In some ways it was emotional as I was doing this on behalf of my dad who had passed away two years ago. It was a very proud day.”

The ceremony began with a dawn blessing followed by traditional speeches. In turn with others receiving titles on the day, Lauano Sue spoke briefly, recognising her late father, before receiving and participating in the ceremonial drinking of ava.

Later fine mats, the headdress, necklace and other gifts from her family were distributed to the village and attending Matai.

Through her new title, Lauano Sue’s connection to Samoa is deepened, and the self-described “very shy” woman who has quietly broken barriers in New Zealand Police is both humbled and motivated.

“It was extra special to be able to celebrate the bestowal with my cousins who are also leaders in their own right.

“There’s an expectation from the family that I use my title in everyday work and life.

“Originally I thought 'I’m not too sure about that'. But when I came back to New Zealand I made a conscious decision that I would recognise it for the respect that it deserves.”

Lauano Sue says she is committed to doing more to support Pasifika people and has started by extending her work with senior agencies running local fono - the Pasifika equivalent of hui or meetings – across the region.

She says part of talking publically and using her title – it’s on her email signature – is to help others understand what it means.

Within Police she hopes to create an environment where Pasifika colleagues have the confidence to do the same: “Use it [your title]. It’s OK. Celebrate your diversity, your culture – it’s an honour and it’s more than just yourself.”

But it wasn’t always OK and, for Lauano Sue, that’s the point.

“I grew up in Hawke’s Bay, the product of a mixed marriage. My father was Samoan, my mother is Palagi (Kiwi). Due to the society of the time I was brought up in a very Palagi environment.”

Sue says her own connection to Samoa grew after her father returned there in the early 80s and began another family.

“It was a pretty tough life for him because he had to fit into New Zealand society. It probably wasn’t until [he left] that I understood the difficulties he faced. He left NZ after I joined Police. He came to my graduation and left about a year later.

“He and my wider Samoan family were able to follow my career thanks to NZ TV News nightly broadcasts in Samoa.”

She says her title is an Ali’i, or chiefly, title. “There’s another title - the Tulafale - that is an orator or ‘talking chief’. I don’t have that. I don’t speak the language. That’s the sad reality for me with my dad living in New Zealand in the 1960s and 70s. The language wasn’t there.”

Lauano Sue says it’s been important for Police to build a workforce culture that truly reflects the community - and since her days in Counties Manukau District she has seen huge change.

“I’ve seen a real shift. In the beginning of 2000 when I was there we would meet and try and support our new people coming through. The numbers now are just massive so it’s great. It’s really cool.”

But she says it’s not easy. “When there is critical mass you get better outcomes – so in the more provincial areas where there is only a handful of Pasifika staff I believe we need to do more to support our people because they are isolated.

“You’ve got to sit at the table to make a difference but if you are the only one sitting at the table it’s a huge responsibility. It’s incumbent on everyone to provide that support so they will be successful.”

While she claims it was luck, Lauano Sue’s own path to Police’s senior management table is one she looks back on with both curiosity and pride.

“I never ever thought I would be in the position that I’m in. Every promotion or step or role I’ve had has been a real honour, a real privilege.

“I never aspired to be a District Commander. It was always ‘What’s the next challenge? What can I do?’ and gaining momentum from that really.”

Lauano Sue began her career in Hastings in 1983 but left a few years later to have children - “we didn’t have flexible employment in those days”.

Lauano Sue says she’s proud to be part of Police. “You build real resilience in this organisation, and it’s how you take other people with you going into the future.

“I don’t have a long time left here. I’m in a position where I can help mould the future and if I can do that just by saying it’s OK to use your title, or going through a door saying ‘Hey I’ve done it – you can too,’ if that’s all I can do, well that’s really important.”