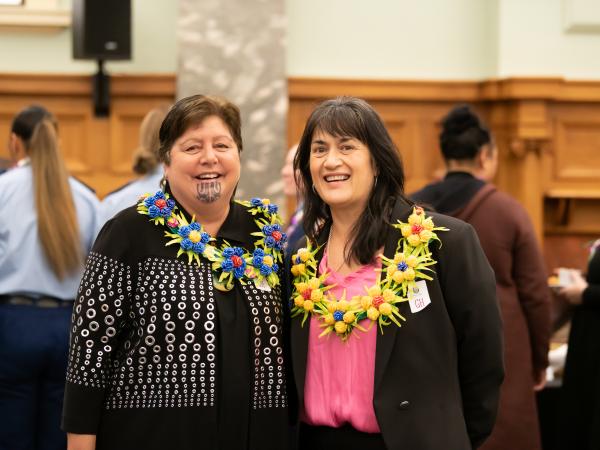 Home > News > Ten One Magazine > What Prue's going to do

​They say if you want something done, you should ask a busy person.

Embodying that quote is Prue Kapua, who now oversees the New Zealand Police Women’s Advisory Network (WAN) – which exists to support women in Police in reaching their full potential.

Prue took on the task of Independent Chair of the WAN after a discussion with Commissioner Andrew Coster over a cup of tea.

Her appointment wasn’t that casual, of course. Prue is President of the Māori Women’s Welfare League, which a year earlier had signed an agreement with Police to work together on the safety of Māori women and children. She had already cemented herself as someone with influence who could work with Police and hold the organisation to account.

And Prue really is that busy person: as well as chairing the WAN Governance Group, she’s a practising lawyer specialising in claims made to the Waitangi Tribunal – a permanent commission of inquiry. On top of those jobs, she sits on myriad boards and trusts.

So, with all of that experience, what’s one of the goals Prue would like New Zealand Police to achieve for women?

“An increase in numbers, at all levels," she says. "The recruitment issue is fine. It’s good to have targets, and certainly those targets are on their way to being met, because they’re looking at the increased number of more diverse recruits.

“But that doesn’t answer the issue about the promotion in the ranks, through the constabulary, because that’s the most obvious face of the police to the community.

“We still have disproportionate numbers at the higher levels."

Prue's decision to work more closely with Police came after the Māori Women’s Welfare League pledged to cooperate with Police to support whānau to be safe and feel safe in their homes and communities.

As its president, she signed the League’s first formal memorandum of understanding with a government agency since its inception in 1951.

“For me, the police were quite a bit more advanced in that acknowledgement.

“It’s very easy to attack from the outside or to poke holes at what’s happening. If you have an opportunity to be part of the process then, from my perspective, you take that."

While speaking to Ten One, Prue graciously told us about her early years which put her on a path to promoting justice and the growth of society.

Prue, of Ngāti Whakaue and Ngāti Kahungunu iwi descent, was born and grew up in Rotorua and left to attend university in Auckland.

“I went to do an arts degree to be a secondary teacher and then panicked when I had to have my last year at the teachers’ college and thought ‘I don’t think I want to be a teacher’.

“So, I did law because I was hopeless at science, but didn’t ever really want to practice law.

Her first job out of university was with the Race Relations Office. She then joined the office of one-time Prime Minister Geoffrey Palmer to work on matters relating to the Treaty of Waitangi.

“I enjoyed it because it was quite a reforming time,” says Prue.

She then went into private practice law and has owned her own law firm since 2001.

“I wasn’t sure that we could achieve too much through race relations. It was like hitting people with a wet bus ticket.

"People were doing some terrible things in terms of their behaviours, but there was nothing that we were really doing that was substantive at that time. I thought going into law practice would be a bit more assertive.”

Now living in Auckland, where her business is based, Prue is careful to take time out from all things justice, for her own wellbeing and to recharge and refresh.

Her down time largely involves music, playing the guitar and focusing on family.

“I’ve got two grown-up children. Having the time with them, relaxing through music with friends, and spending time with people who don’t ask you lots of questions.

“I enjoy singing at home. It’s quite easy to lose yourself listening to or playing music or singing. It’s a great way to unwind.”

Previous
Recruit training through a lockdown
Next
Kai with aroha