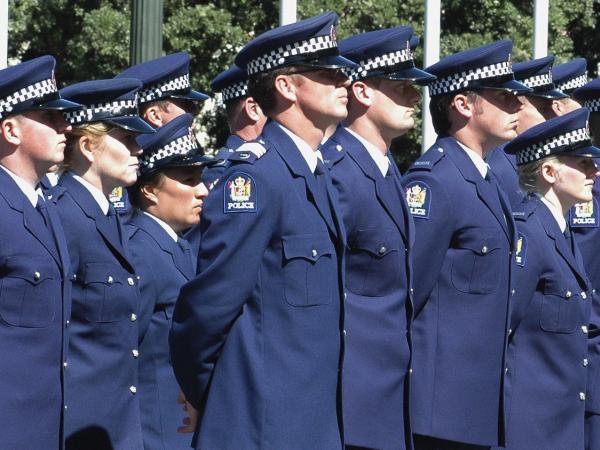 Have you ever wondered where our ranks come from and what they mean?

The Met was a civilian force and the uniform was manufactured in blue to distinguish it from the red of the military. Along with this, police ranks did not include military titles, with the exception of ‘sergeant’.

In 1886, when New Zealand Police was established as a civil, national police force, the ranks mainly came from the New Zealand Armed Constabulary - the forerunner of both Police and the Defence Force. They were: constable, sergeant, sergeant major (until 1906), sub-inspectors (until 1958), inspectors, superintendents and a commissioner.

“The uniforms drew on the insignia of rank worn by the British military. There is still a strong parallel with army ranks today,” says Rowan.

Our current rank slides [epaulettes designating rank] have remained the same since 1995, when the word 'Police' was removed from the epaulette - at that time the 'coat of arms' shoulder patch was placed on the shirts, with the 'Police' wording on it.

The title ‘constable’ comes from the Latin comes stabuli - 'Count of the Stable' - and originated from the Eastern Roman Empire. Originally, the constable was the officer responsible for keeping the horses of a noble. The title was imported to the monarchies of medieval Europe, and in many countries developed into a high military rank and great office of state, such as the Constable of France.

The office of the constable was introduced in England after the Norman conquest of 1066 and was responsible for the king's armaments and protection of settlements throughout the country.

Constables make up 75 percent of Police's constabulary strength, and are the equivalent of a private in the army. Frontline constables investigate crimes, perform foot - and sometimes cycle - patrols, keep our roads safe on traffic patrols and keep our communities safe by responding to public disorder and helping people in distress.

All police officers start as a constable, swapping their 'Recruit' slide for one with their personal ID number when they are attested before graduation from the Royal New Zealand Police College. All constables must serve on general frontline duties before deciding whether they would like to follow a more specialised pathway.

The senior constable designation was introduced in 1979, without any change to rank insignia. Appointment to senior constable is in recognition of 14 years' good conduct and experience. Senior constables are also awarded a Long Service and Good Conduct medal at this stage of their career to recognise this contribution. There is no military equivalent.

This rank slide, with one chevron, was introduced in 2000 (for information on the chevron, see 'Sergeant' below.)

The title ‘sergeant’ was borrowed from the Army. Sergeant is a rank used in some form by most militaries, police services, and other uniformed organisations around the world. Its origins are the Latin serviens, ‘one who serves’, through the French term sergent.

The sergeant’s rank in New Zealand Police is signified by three chevrons. ‘Chevron’ is an architectural term denoting the rafters of a roof meeting at the upper apex. The chevron in heraldry was used as a badge of honour to mark the main supporters of the head of the clan or ‘top of the house’, and came to be used in various forms as an emblem of rank for knights and men-at-arms in feudal days.

In New Zealand Police, a sergeant may be responsible for all operational decisions and policing activities in a given town or city, particularly after hours. Sergeants may be the immediate supervisor of a section of frontline constables, and can lead teams of detectives, road policing staff or community-based staff.

At the formation of the New Zealand Police Force in 1886, the senior sergeant rank was known as sergeant major. This rank was changed in 1906 to station sergeant, and then in 1910 to senior sergeant.

The sergeant major had four chevron stripes on their sleeve with a Victoria crown above it. With the change to senior sergeant in 1910, the crown was abolished, leaving just the four chevrons.

In 1915, the rank insignia changed again. This time the chevrons were removed and replaced with the Tudor crown (also known as the King’s crown). With the coronation of the current Queen, the crown insignia changed to a 'Queen’s Crown'. In 1995, all rank designations were moved from the sleeve to the epaulette, at which point the Queen's crown was surrounded with the stylised wreath.

Today senior sergeants can be found in district command centres countrywide or in the National Command and Coordination Centre at Police National Headquarters.  They may hold more strategic management roles within districts, and will often have tactical command and lead policing activities across a whole district.

The title of ‘police inspector’ dates from July 1829 and the earliest days of Sir Robert Peel's new Metropolitan Police. In New Zealand, inspector was part of the rank structure in Governor Grey’s early paramilitary force.

Today's inspectors are distinguished by an epaulette with three stars - based on the star of the Order of the Bath, and taken from equivalent military ranks - and silver oak leaf braid on the forage cap.  Otherwise the uniform is essentially the same as a constable's - the silver sleeve trimming and shoulder cords of inspectors of previous generations are long gone.

Inspectors typically set the direction for a policing area or a particular district function, such as area commander, road policing manager or prevention  manager. They are usually policy-makers and ensure operational staff have everything they need. Many inspectors are also employed at district and national headquarters to help develop strategies and plans to tackle the really big issues. Today the rank is considered to be the equivalent of a captain.

The word comes from the Latin superintendens, meaning 'overseeing', as befits a role with senior oversight and charge.

In 1958 the rank of chief superintendent was created. The last appointment to that rank was made in 1988.

Superintendents are the first level of strategic leader and usually command one of the 12 police districts. They are responsible for all staff working in the district and also for ensuring policing targets are met and their roads, communities and people are as safe as they can be. Superintendents can also serve as police liaison officers in our overseas posts, lead national workgroups and head responses to major national incidents. The equivalent military rank is lieutenant colonel.

If a superintendent holds an executive position, this is denoted with a silver braid edging to their epaulette.

Assistant commissioners and deputy commissioners are the senior managers in the Police Executive. They hold portfolios covering the range of police work.

Our assistant commissioners today have executive oversight of areas including Prevention; Response and Operations; Investigations, National Security and International; Road Policing; Service; and Districts. Their military equivalent is brigadier.

The first deputy commissioner was appointed in 1974.

In New Zealand Police, statutory deputy commissioners may be appointed by the Governor-General on the recommendation of the Prime Minister after an appointment process managed by the Public Services Commissioner.

Since 2014, deputy commissioners have also been appointed by the Commissioner of Police. They hold the same rank but these are non-statutory roles.

The deputy commissioners have wide portfolios in areas such as operations, leadership and capability, iwi and communities. In addition, if the commissioner is incapacitated, the longest-serving deputy commissioner will assume the office, with all its powers, functions, duties and responsibilities, until an acting commissioner is formally appointed by the Governor-General on the advice of the Prime Minister. The military equivalent is major general.

The title ‘commissioner’ typically designates the head of an entire police organisation. In New Zealand the commissioner is appointed by the Governor-General on the recommendation of the Prime Minister after an appointment process managed by the Public Services Commission.

The position combines the functions of chief constable in charge of policing and cases, and chief executive responsible for assets and budgeting. In military terms, the rank is equivalent to lieutenant general.

When the Police Force Act 1886 split the policing function from the military, Sir George Whitmore was appointed as the first commissioner, reporting to the Minister of Defence. Early commissioners came from Britain with military or law enforcement experience, such as Walter Dinnie, who had served as an inspector at Scotland Yard. The first New Zealand-born commissioner was William Bernard McIlveney, who served from 1926 to 1930.

Commissioner Andrew Coster is the 32nd person to hold the position of Commissioner of Police, but the 33rd person to lead the organisation since 1886: in 1955 Sam Barnett, previously head of the Department of Justice, was appointed Controller General of Police and held the post for three years. This was the only time since the earliest days of New Zealand Police that its leader was not a police officer.

Under the Policing Act 2008, the commissioner is responsible to the Minister of Police in administrative matters but must act independently in relation to the maintenance of order, law enforcement, investigation and prosecution of offending and decisions about individual staff members.

CIB staff do not normally wear police uniform or rank insignia and specialise in criminal investigations across a wide range of offending.

Training to become a detective starts when a member is a constable on trial or constable attached to the CIB. After successfully completing a training course at the Royal New Zealand Police College, the staff member becomes a detective constable.

This document contains information researched by former Inspector Mike Hill, and we acknowledge his contribution in bringing this information together, along with the Police Museum and Response and Operations group.

Previous
Ka tū māia, ka whakaputa i te reo
Next
YES, we can