Prior to joining the New Zealand Police in 1962 Valerie Redshaw had been in the London Metropolitan Police. Posted to the Women’s Division at Auckland Central she served there until she married.

After marrying, Valeria left Police to have children and taught at various schools in Otago and the Bay of Plenty for a while. She later attempted to re-join the police in the mid-1970s, but was told the police did not employ women with children.

In 1984 she became an Education Officer at the Royal New Zealand Police College, with the responsibility for training youth aid officers, recruits and contributing to senior and commissioned officer courses. This was followed by a period of seven years designing curriculum for all police training, followed by a two and a half year secondment to the New Zealand Customs Service as their National Manager Training and Development.

Keen to advance the status of policewomen and promote training, she was the police representative on a number of public sector bodies including the EEO Advisory Group, the Public Sector Training Organisation and the Government Committee for Suffrage Centennial Year.  She also served on the academic board of the Open Polytechnic of New Zealand.

In 1991 she was given the task of organising the celebration of 50 years of women in policing. This inspired her to document women’s history in the service. Her book, Tact and Tenacity, was published in 2007.

In 1993, Valerie, was awarded the Suffrage Centennial Medal for services to policewomen and in 2007 she was made a member of the New Zealand Order of Merit for services to education. Post policing, Valerie contributed to the development of the Border Service in East Timor receiving the East Timor and New Zealand Operational Service Medals. A Justice of the Peace for 40 years she ended her working career spending six years with the Royal Federation of New Zealand Justices’ Associations as their Education Officer.

She regrets not being able to return to operational policing in the 1970s after she had her children, or in the 1980s because of age restrictions, but is pleased to have been able to contribute to changes in policy that have improved conditions for other policewomen. 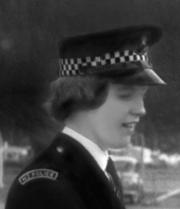