Commission of Inquiry into Police Conduct

Former Prime Minister Rt Hon Helen Clark announced the Commission of Inquiry into Police Conduct (COI) on 4 February 2004. The Commission was established to carry out a full, independent investigation into the way in which the New Zealand Police had dealt with allegations of sexual assault by members of the Police and associates of the Police. This followed the publication of allegations suggesting that police officers might have deliberately undermined or mishandled investigations into complaints of sexual assault that had been made against other officers.

The Commissioner, Dame Margaret Bazley released her report in 2007. The report identified a range of systemic issues as well as behaviour patterns among certain elements within Police that were factors in the alleged misconduct. The report made 60 recommendations: 47 for Police, 12 for the Independent Police Conduct Authority (IPCA), and one for the Government. It also distinguished five patterns of unprofessional behaviour amongst certain elements within Police that needed to be addressed. The then Commissioner of Police fully accepted the Commission’s findings, and committed to implementing the recommendations made by the Commission. 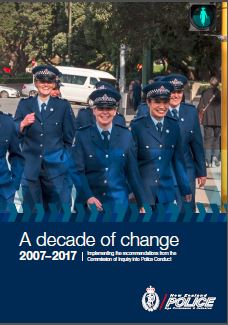 A summary of how Police has actioned the 47 police-specific recommendations from the Commission of Inquiry (COI) into Police Conduct.

Two independent reviews commissioned from experts on policing and ethics, to help gauge progress in implementing the Police-specific COI recommendations.

A ten year monitoring and reporting regime was put in place to track the progress of the implementation of the Commission’s recommendations. The monitoring period runs from 1 April 2007 until 31 March 2017.

The monitoring and reporting regime incorporates the following: