I am pleased to introduce New Zealand Police’s framework for preventing and reducing alcohol-related offending and victimisation: 2010 to 2014.

This framework sets our principles and focus around alcohol issues for Police for the next five years.

Since the launch of the Police Alcohol Action Plan in 2006 there has been significant increases in Police’s effort and enforcement to reduce alcohol-related harm. Even with this additional focus, alcohol is still the drug that most impacts on offending and victimisation in New Zealand and therefore causes the most problems for Police.

Police will continue our commitment to work in partnership with the community, other government agencies, non-government organisations and industry bodies to reduce alcohol-related harm. This framework also reconfirms the growing emphasis on pro-active and preventative measures by Police to reduce alcohol-related harm, reduce the number of victims and provide value for money initiatives.

The aims of this framework will be implemented by a Police Alcohol Control Strategy.

On an ‘average’ day in New Zealand

The impact of alcohol misuse on policing and New Zealand

At least a third of all Police recorded offences are committed by an offender who has consumed alcohol prior to committing the offence. 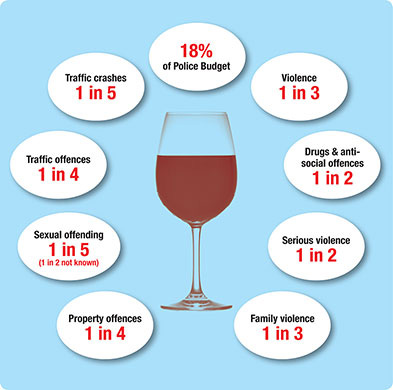 The aim and outcomes of New Zealand Police’s framework to reduce alcohol-related harm:

The outcomes of this strategy will be delivered through five main areas of activity –
Prevention, Intelligence, Enforcement, Reassurance and Support (PIERS):

What Police has achieved so far

Since the launch of the Police Alcohol Action Plan in 2006 there have been significant increases in Police’s enforcement levels of many alcohol-related activities. These include:

The use of high quality alcohol-related intelligence and data is now routinely used within Police, especially since the introduction of Police’s Alco-link system.

Police enforcement applications made to the Liquor Licensing Authority

There will be a particular focus for Police on a number of key activities and principles that fit within the PIERS framework:

Police will continue to use preventative measures to reduce alcohol-related harm and offending. These will include:

Since the introduction of Police’s Alco-link system, which identifies offenders to the locations of their most recent alcohol consumption, Police is better able to identify alcohol problems and implement appropriate solutions. Police will continue to ensure that high quality alcohol-related data and intelligence is used and appropriately shared with key partner agencies.

Police will continue to work in partnership with communities to identify alcohol issues and appropriate solutions. This will include appropriate alcohol-related initiatives designed for and by members of specific population groups.

Police will work in partnership will both local and national partners to prevent and reduce alcohol-related harm. This work will include:

Police’s framework for preventing and reducing alcohol-related harm will contribute to
the following:

The table on page 7 summarises the key elements of the Alcohol Control Strategy.

The below table provides a summary of the Police Alcohol Control Strategy (Restricted Document).

Police will put in place a monitoring system for this framework. Our progress will be tracked by measuring our outputs that impact on the overall outcome. These outputs are linked to intermediate indicators which are indicative of Police’s preventative and enforcement efforts. The final outcome of reducing alcohol-related offending and victimisation is the aim for this framework. It is important to note that policing is but one contributor to the final outcome, with wider issues such as alcohol availability and New Zealand’s drinking culture playing significant roles.