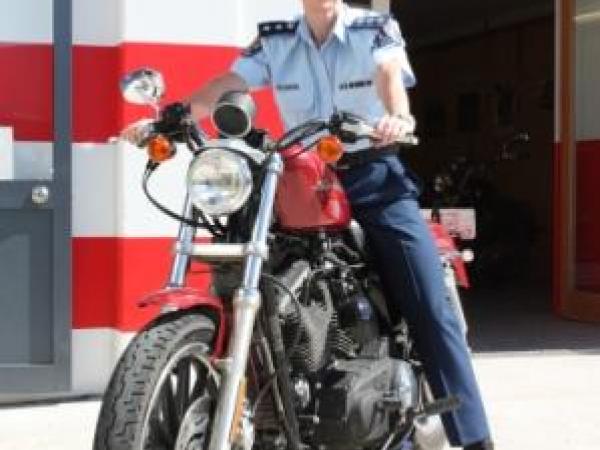 Inspector Richardson, a motorcycle enthusiast and self-professed "gym bunny" took up the position in January, moving to the region from Orewa, where she was Sub-Area Manager for the Hibiscus Coast and Orewa.

The move to Tasman District is both a promotion, from Senior Sergeant, and a lifestyle move.

Inspector Richardson said she considered the core function of her role was saving lives and putting in places structures and initiatives that will help reduce crashes and injuries.

Her first impressions of road users here since moving to the district are all complimentary.

"The driving is generally good and there is very good compliance with bike helmet rules. I've also been impressed with the number of bike lanes there are as well."

"I'm a vulnerable road user myself and when I'm on my bike I want to know there are measures in place to save my life."

Inspector Richardson describes the district as a "mecca for bikes". However, the district also has the unenviable record for the highest number of fatal motorcycle accidents in the country.

Throughout the 100-days campaign Police will be stopping motorcyclists and checking for roadworthiness and compliance. During the last 100-days campaign, which ran from July to October 2010, there were no fatal crashes in the district. However, Inspector Richardson said there was still plenty of work to be done.

"While we didn't have any deaths, the overall crash figures were up by one, from 18 to 19."

Inspector Richardson points out that the previous campaign was run during the winter months. Ideally she would like to see a campaign run through January, February and March, which are the district's highest risk months.

The Tasman Police District covers Nelson, Marlborough and the West Coast, from Kaikoura to Haast and Inspector Richardson said the geographical spread would be one of the bigger challenges of the job.