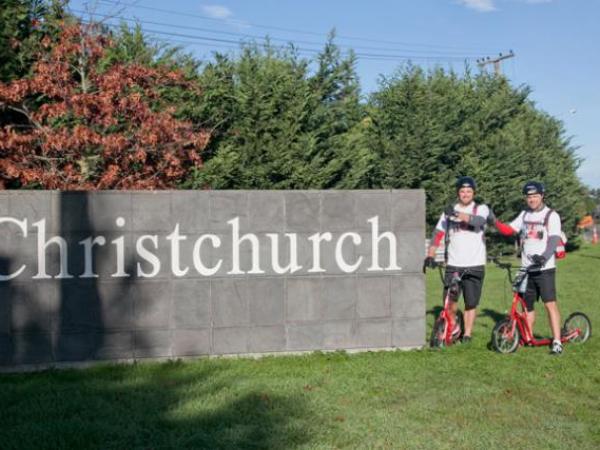 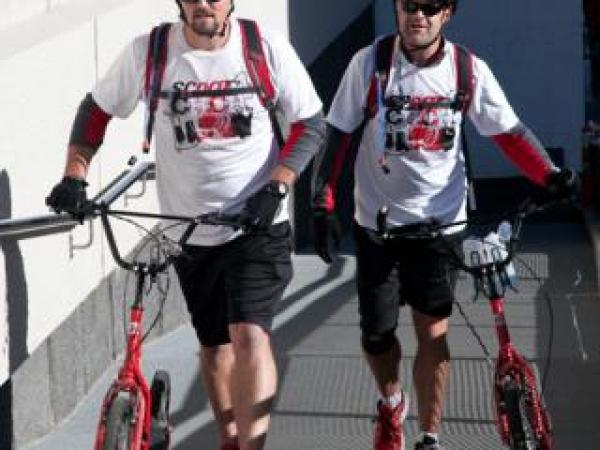 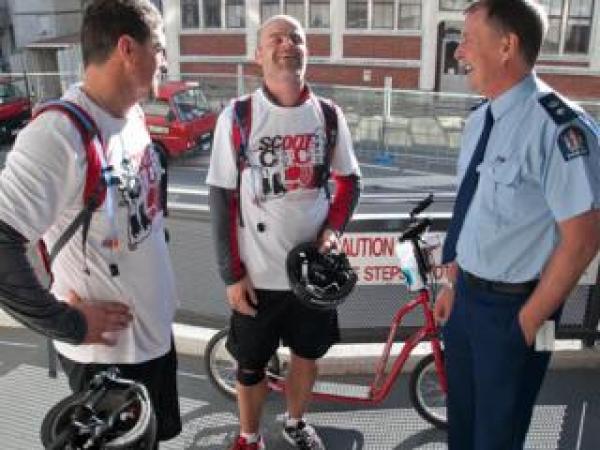 Two Gisborne police officers have raised nearly $10,000 for Christchurch earthquake relief after scooting all the way to Christchurch.

Constables Rob Newman and Nathan Whitley pushed their kick scooters in to Christchurch Central Police Station just before midday today [Tuesday 24 May] after a 950-kilometre trek.

The pair were delighted to have made their destination safely - and thrilled to be able to contribute to the Red Cross Christchurch Earthquake Appeal.

Rob says the money raised has come from a combination of donations and sponsorships, including a Stg1000 (NZ$2200) kick-start from his former colleagues at West Midlands Police in the UK.

"We're delighted - it's been well worth the effort," says Rob. "People we've met along the way have been positive and happy to contribute."

They've travelled an average of more than 90 kilometres a day, despite battling illness and atrocious weather along the way.

The toughest stretch was from Nuhaka to Dannevirke. "That was sheer hell," says Rob. "We had gale force westerlies in our face the whole two and a half days."

If that wasn't enough, Nathan was also fighting illness. "For the first three days I struggled a bit," he says. "I got a stomach bug the first night in Wairoa so I'd been vomiting between Wairoa and Dannevirke. I struggled for energy but pushed on as well as I could and from that point on I came right."

Rob describes the pace of the journey as somewhere between a walk and a jog - averaging up to 16 kmph with favourable winds, and single figures with head winds.

The technique on the standard kick scooters with 16-inch bicycle tyres was pretty straightforward, Rob says. "We got it down within the first couple of days to a pattern of crouching, kicking ten, then changing feet, crouching, kicking another ten."

"The scooters were fantastic," Nathan adds. "We just had to inflate the tyres every couple of days. We had a spare one in the back of the support vehicle and it stayed there the whole time."

Rob says he initiated the scooter run as a way of doing something to contribute to the earthquake relief effort. He considered walking and cycling, but decided on scooters after seeing a similar machine being used by a mum at his young son's school. "I thought - that's a good idea, and that was it really. I found the company that supplied them, rang them up and asked if they'd give us two and they said no problem."

Despite now being scooter experts, Rob and Nathan say they won't be jumping back on the scooters for the return trip.

1. Constables Nathan Whitley (L) and Rob Newman at Belfast on the last leg of their fundraising scooter journey from Gisborne to Christchurch.

2. Constables Nathan Whitley (L) and Rob Newman push their scooters the final few metres up the ramp at Christchurch Central Police Station after completing their trip from Gisborne to Christchurch.