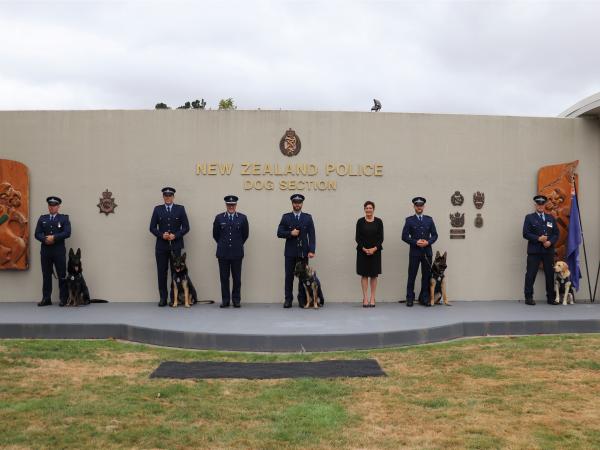 Trained, qualified and ready to go – five new Police dog teams will be working across Tāmaki Makaurau, Wellington and Canterbury from next week after graduating from the New Zealand Police Dog Training Centre, Trentham, yesterday.

It was paws and feet forward as the teams paraded before the Minister of Police, the Honourable Poto Williams, Deputy Commissioner Jevon McSkimming (Strategy and Service), Police colleagues, proud families and friends.

Three of the officers are first time handlers, with graduation marking the operational start of their careers within Dog Section.  This follows several years of working on other frontline policing duties, fostering pups and successfully completing months of training in their home districts and on dog training centre courses.

They join 108 other operational Police patrol and detector teams, with a further 13 dog teams in active training. Police also has 30 dogs used for breeding and in the last 12 months have bred 105 German Shepherds and Labrador pups.

It’s a case of like father, like son as Constable Michael Lamb joins his father Senior Constable Bruce Lamb on Christchurch’s dog section.  “Being a dog handler is something I’ve always wanted to do,” says Constable Lamb who has grown up with Police dogs all his life.

There’s been no shortcuts to training however and he’s fostered patrol dog Usain, detector dog Luther and now his own patrol dog – two-year-old Griffen.

Constable Mat Morris joined Police in 2014 and worked for five years in Whangarei before shifting to Auckland in 2019 to take up a trainee dog handler position.  Joining dog section has been his goal, and he’ll be working with 2-year-old German Shepherd Dane on the Tāmaki Makaurau team.

Senior Constable John Fraser, Tāmaki Makarau, joined police in 1981 and has been a dog handler for most of that time.  He’s worked five patrol dogs before taking over a detector dog last year from a retiring colleague.

Police Minister Williams congratulated the five teams for their hard work and achievements, saying they are part of a police service “making a meaningful impact in our communities every single day.”