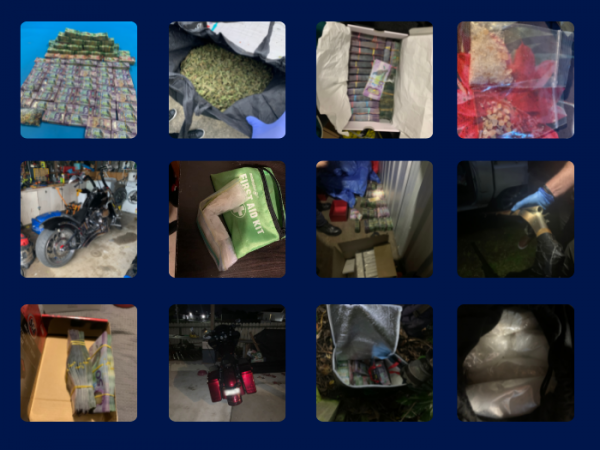 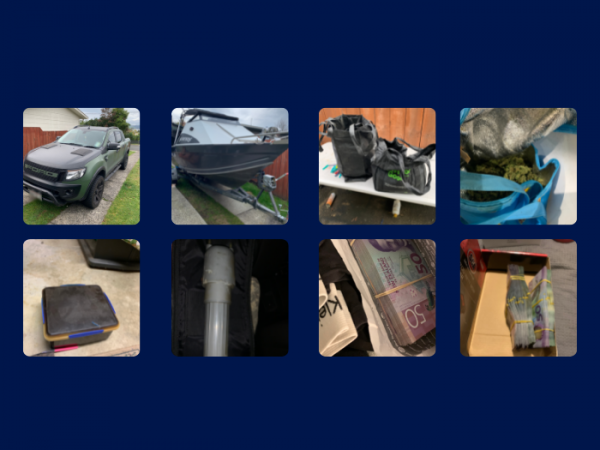 As of last night, 35 people have been arrested, these people have appeared in the Auckland District Court and Hamilton District Court this morning and today facing a wide range of serious drug dealing and money laundering offences.

New Zealand Police have laid over 900 charges in relation to those arrested.

Senior members of the Waikato Comancheros, Waikato Mongrel Mob and Head Hunters were arrested. These people are considered to be among key leaders of organised crime groups in New Zealand.

Large bags of cannabis, multiple kilograms of iodine, four firearms, 14 vehicles and motorbikes, estimated over one million dollars in cash and a number of mobile phones have all been seized.

Since 2018, Operation Van has seen many successes including the seizure of 137.5 kg of methamphetamine from a storage unit in Rotorua in 2019. One person has pleaded guilty and has been sentenced for possession for supply in relation to this matter.

Waikato Comancheros and Waikato Mongrel Mob Kingdom members are alleged to have worked with offshore entities to import large quantities of methamphetamine and MDMA for distribution across New Zealand in Operation Equinox.

Auckland based Head Hunters members are alleged to have delt large amounts of methamphetamine in Operation Seltos.

These operations, run under the umbrella Operation Spyglass, have contributed to the world’s most sophisticated law enforcement action against organised crime to date in Operation Trojan Shield.

Operation Trojan Shield, led by the FBI and co-ordinated with the DEA, AFP, Europol and numerous other law enforcement partners from more than a dozen countries, is a covert law enforcement operation infiltrating encrypted devices used by transnational crime groups.

In the past, the FBI has dismantled encrypted platforms criminals used to communicate. Operation Trojan Shield saw the FBI create a closed encrypted company, called ‘ANOM’ to fill this void and to target organised crime, drug trafficking and money laundering activities across the globe by monitoring individual’s communications about their criminal offending.

For over 18 months, ANOM’s criminal users unknowingly communicated on the system operated by FBI agents. The users, believed their ANOM devices were protected from law enforcement by the shield of impenetrable encryption.

Intelligence derived from the platform presented opportunities to disrupt major drug trafficking, money laundering, and other criminal activity while the platform was active.

New Zealand Police began working with the FBI on Operation Trojan Shield in January 2020 to monitor the communication of platform users in New Zealand. Information between our agencies led to the commencement of Operations Equinox and Seltos.

“I am exceptionally proud of our New Zealand Police staff who supported Operation Trojan Shield. This operation will have an unprecedented impact on organised crime syndicates across the globe,” Commissioner Andrew Coster says.

“We value our strong relationship with the FBI, AFP and Europol and it is through these partnerships and the unrelenting efforts by law enforcement agencies from multiple countries that this operation has seen such incredible success.

“This is a fantastic result and reiterates the importance of our transnational partnerships with law enforcement agencies across the globe in our common ongoing efforts to dismantle organised crime groups and the enormous harm they cause our communities.”

Encrypted platforms are now regularly used by criminals to operate their criminal activities. They are designed to prevent law enforcement’s ability to intercept these communications and therefore enable serious and organised crime, Detective Superintendent Williams says.

“This is one of the most sophisticated law enforcement operations in the global fight against organised crime.

“It takes years to build these networks. Large-scale operations of this nature create enormous disruption and paranoia within organised crime groups because it breakdowns their communication channels that they use to evade law enforcement detection.”

New Zealand Police is constantly looking to disrupt how these groups operate. As they continue to adapt and grow, we will continue to target these groups and individuals that align themselves with them, Detective Superintendent Williams says.

Police are acutely aware of the negative impacts and social harm caused by organised crime, this including the sale and supply of illicit drugs, firearm offences and serious money laundering activities.

The ongoing supply of any illicit drugs in communities results in huge social harm, negative health implications and financial harm, particularly to drug users and their families. Money laundering is not a victimless crime, these activities enable serious organised crime to occur and by shutting down the money is how we truly can get to these organised crime groups.

In addition to enforcement action, Police are working with our communities to reduce, manage and mitigate the effects of organised crime on whānau and communities. This ultimately is about ensuring our communities are resilient and feel safe.

“Today’s announcement demonstrates how the FBI, led by its Legal Attaché Offices around the world, and our multiple foreign law enforcement partners can come together to successfully combat transnational organised crime and drug trafficking activity. The innovative approach to Operation Trojan Shield should be a warning to criminals everywhere that collective law enforcement cooperation is no match for those criminals attempting to hide behind encrypted communications platforms,” an FBI spokesperson says.

“The FBI will continue to explore all avenues and work closely with our partners to bring those responsible to justice, wherever they may reside. FBI partnerships are the key to successes, as no one country or agency can tackle this problem alone. We thank all of our national and international partners for their unfettered commitment and dedication to addressing this shared global issue and look forward to continued, collaborative efforts in the future."

Throughout the day on June 8th further details regarding the global impact and scale of Operation Trojan Shield will be provided by our international partner agencies, including press conferences held by AFP, Europol and FBI. For details on how to view these conferences and for confirmed questions and answers on the operations please email media@police.govt.nz