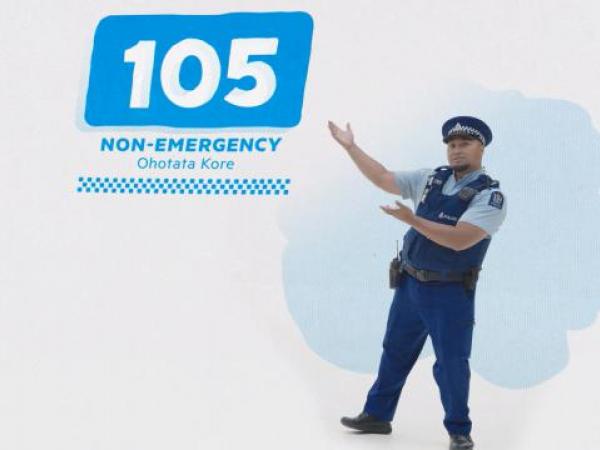 At 10:05 am on the 10th of the 5th, New Zealand Police is launching 105 (“ten five”), the eagerly anticipated number for the public to report non-emergency situations to Police.

“More than 60 years on from the first 111 call, the launch of 105 today is a milestone for New Zealand Police, offering a new way for people to connect with us,” says Commissioner of Police Mike Bush.

“The 105 number and our online platform - 105.police.govt.nz - will make it easier for the public to engage with us for non-emergency help, advice and support.”

105 is a national non-emergency number that will be answered 24/7 by highly trained Police staff. It is free to call from all landline and mobile numbers.

“Introducing 105 is part of our drive to modernise the way we deliver services to the public and ensure everyone in New Zealand can access policing services – anywhere, anytime,” says Commissioner Bush.

“We want people to use 105 to report non-emergency situations. For example, if your car has been stolen, your property has been damaged, or you want to give Police information about crime in your area; use 105.

“111, on the other hand, should still be called immediately if a crime is taking place or there’s a threat to life or property. It’s the number you use to connect with Police, Fire and Emergency, and the ambulance services.”

As well as by phone, people can go online to the 105 website to report certain non-emergency situations, and get updates on or add more information to their existing reports. Currently, lost property, intentional property damage, shoplifting, general theft, and theft from a car can be reported at 105.police.govt.nz.

“We’re encouraging people to report non-emergencies online when and if they can,” says Commissioner Bush.

Commissioner Bush says Police has planned for an increase in non-emergency calls with the introduction of 105.

“We’ll launch our marketing campaign - including a jingle designed to guarantee 105 is a number you’ll never forget - once we are sure we understand the demand which has been generated from the public education campaign.”

Video and imagery for media use

Why is Police introducing a non-emergency number?

NZ Police is modernising the way it delivers services to the public so that everyone in New Zealand can access policing services – anywhere, anytime. To do this we need to deliver the right service to the public in the right way, enabled by modern technologies. NZ Police is introducing a new, easy-to-remember number – 105 – for reporting non-emergencies. 111 remains the number to call to report an emergency to Police, Fire and Emergency, or ambulance services. The 105 non-emergency number is for reporting situations to Police that don’t require immediate police attendance.

What situations is 105 for?

You can use 105 to report non-emergency situations, such as when your car has been stolen, your property has been damaged, or you want to give police information about crime in your area. The key message is that if it’s happening now or just happened and there’s a threat to life or property, call 111; if it’s already happened and there’s no immediate danger, call 105.

What does Police expect will happen to emergency and non-emergency call volumes and response times?

105 is a national non-emergency number that will be answered 24/7 by Police. The call taker will work to resolve the matter, which might include putting the caller through to their local station. Both 111 for emergencies and 105 for non-emergencies are staffed with highly trained people who can help callers with their specific issues.

What other ways can people report non-emergency situations to Police?

Is there a text based 105 service available?

No, a text based service is currently not available. Please call 105 to talk to Police for non-emergency matters.

Will I be able to call 105 from messaging apps such as ‘Skype’ or ‘WhatsApp’?

No, computer and mobile apps are typically internationally managed and operated. It is unlikely you will be able to contact 105 from apps to talk to Police for non-emergency matters.

Will I be able to call 105 from an internet or overseas-based phone system?

No, internet-based or international-based phone systems will not dial out to 105. Depending on which country and phone system you are calling from, you will be able to call +644 9105 105 for non-emergency matters, however you may incur international toll charges.