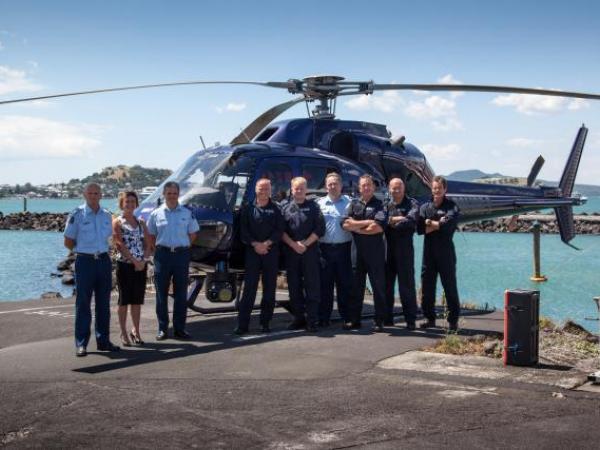 Auckland City Police have ensured the quick resolution of a ram raid burglary in Ponsonby, rescued a man who took a late night dip and recovered stolen property thanks to the valuable support of the Police Eagle helicopter to ground and water Police units.

Just before 1am this morning, a stolen vehicle crashed through the front doors of the Deadly Ponies handbag store in Ponsonby and two men entered, taking a number of high end handbags from the store.  The men fled the scene in another stolen vehicle driven by a woman, a transition which was spotted by Eagle helicopter.  The vehicle was tracked and three offenders were arrested without further incident. The stolen property and vehicles were recovered.

Only an hour after the ram raid was reported, Eagle was directed to a commercial burglary in Henderson in Waitemata Police District, where five young people were seen breaking into a bakery.  Eagle was able to provide invaluable information on these offenders’ movements, and Police dog units were able to track them to a property nearby, where stolen property from a number of locations was recovered.

Soon after at around 2am, a report of a person overboard from a fishing boat near Pakatoa Island was received by Police maritime unit Deodar.  Eagle helicopter was able to quickly assist by arriving overheard and searching for the man, and grave fears were held for his life.  Eagle located the man alive, and directed Deodar to pick him up.  By that point the man had spent at least 45 minutes in the water.  He was tired and cold but otherwise reported to be well and was returned to the city by Deodar.

Auckland City District Commander Superintendent Richard Chambers says these three incidents highlight the value of air, ground and maritime staff working together across the city alongside members of the public.

“Eagle is able to assist other Police units by directing them quickly and safely to the right location,” says Superintendent Chambers.  “By deploying to demand and targeting the right locations at the right times help us to resolve incidents efficiently and effectively.