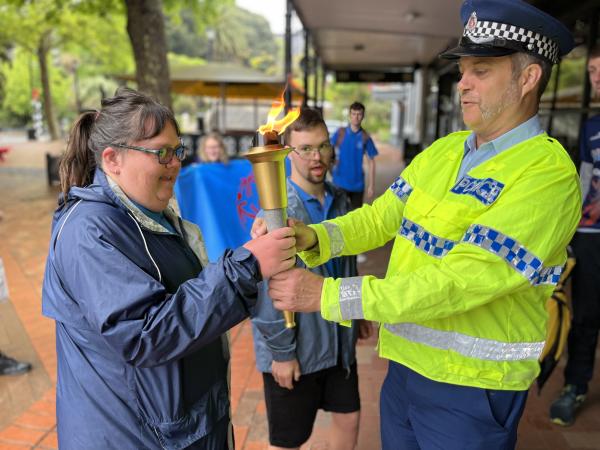 They will ‘walk’ the flame from Lower Hutt to Wellington, via the Lady Liz Police Launch across the harbour on board the vessel.

• 9.30am - Hutt Valley-based athletes, family and supporters assemble outside Lower Hutt police station on Kings Crescent. Hutt-based media can join here.
• 9.50am - Parade makes its way to Lower Hutt Town Hall.
• 10.30am – Presentation to athletes by Lower Hutt Mayor and Police.
• 10.50am – A selection of athletes travel to the Seaview Marina where they will board the Police Launch Lady Liz.
• 11am – Lady Liz departs the Seaview Marina and makes its way to the Maritime Police Unit base at Wellington Wharf.

Timetable for Wellington Leg with torch

• 11.30am – Hutt Valley athletes pass the torch of hope to representatives from the Wellington and Mana Special Olympics Clubs and Wellington Mayor at the Wellington Wharf. Wellington-based media can join here.
• 11.45am – The parade makes its way to Parliament.
• 12.30pm - Law Enforcement Torch Run concludes.

The Wellington leg of the LETR also coincides with the International Day of Persons with Disabilities which promotes the rights and well-being of persons with disabilities in our communities.

The Law Enforcement Torch Run (LETR) has seen torches relayed from each end of New Zealand to Hamilton – the venue for the 2022 Special Olympics National Summer Games which takes place next week on Thursday 8 December.

“The support of the New Zealand Police and other service personnel is hugely valued and we have enjoyed taking to the streets with them as we’ve moved throughout the country,” Special Olympics chief executive Carolyn Young says.

“The LETR is one of the highlights of major Special Olympics events, and this year we are excited that the torches will travel to regions and clubs taking part in the National Summer Games.”

Inspector Mark Harrison, of Palmerston North Police, is Director of LETR NZ. “Once again we are delighted to be able to support the build-up to the National Summer Games. Law enforcement staff have been proud to run alongside the athletes through our communities as the Flame of Hope makes its way to the Games in Hamilton.” The Flame represents so much of what policing is about – it stands for hope, courage, opportunity, inspiration and equality,” Harrison added.

The Wellington leg of the LETR is the second to last of several torch run events which have taken place throughout New Zealand in the lead-up to the Special Olympics National Summer Games in Hamilton.

Similar in style to the Olympic torch relay, the LETR is a series of runs and fundraising events that raise awareness and money for the Special Olympics movement. Globally more than 90,000 police professionals and supporters across 46 countries participate in Law Enforcement Torch Runs.

Media are invited to attend the Wellington LETR to take photos and interview participants, including some of the local Special Olympics stars heading to the National Summer Games in Hamilton next week.
What:   Law Enforcement Torch Run, Wellington District leg
Where:  Meet at: Lower Hutt Police station at 9.30am for Lower Hutt start or Wellington Police Launch Base at Wellington Wharf at 11.30am for Wellington city start
When:   Saturday 3 December 2022
Who:   Wellington District Special Olympics athletes, coaches, families and local police
Contacts: Police contact;  Senior Sergeant Andrzej Kowalczyk phone 021 190 8971

RSVP your attendance to media@police.govt.nz