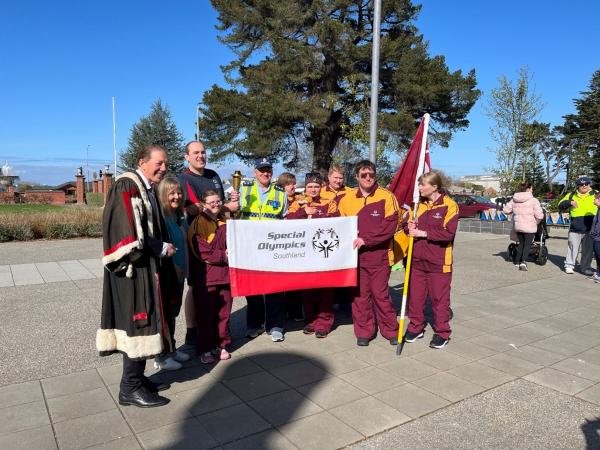 The Freemasons New Zealand Special Olympics National Summer Games are being held from 8 to 12 December in Hamilton.

A contingent of New Zealand Police will walk alongside Special Olympics athletes from Canterbury and carry the “Flame of Hope” from the Riverside Market near the Justice and Emergency Services Precinct (Te Omeka) this Sunday at 11am.

Before they head off, the walkers will be met by Police and other emergency services staff to walk from Riverside Market around central Christchurch finishing at Margaret Mahy Park.

The flame symbolises courage, celebrates diversity, and unites communities around the globe with over 97,000 law enforcement members carrying the “Flame of Hope” at events annually.

Inspector Mark Harrison, chair of the LETR New Zealand Charitable Trust and New Zealand LETR director, says “ LETR epitomises what policing is about – being an active part of the community and supporting positive community initiatives.  It would be great to have the community attend and cheer us on.”

Inspector Leairne Dow, Relieving District Prevention Manager, is proud to be involved in the Christchurch leg and says, “We are thrilled to be supporting such a great event and we’re wishing our Canterbury athletes the best of luck for the competition.”

“Our clubs have been building up to our pinnacle event for five years, and the LETR  is a wonderful way to raise awareness around the country and to get everyone excited about the National Summer Games,” says Young.

“We are very grateful to the New Zealand Police for being such a fantastic partner in this event for so many years and we hope the people of Canterbury and the rest of the country will come out in numbers to show their support for our athletes.

The torch will be travelling through most major centres in New Zealand in the next two months.

Media are invited to attend the Torch Run and photographers are welcome. Special Olympics New Zealand will also be photographing the event and is happy to supply images to media as requested.

To find out more about the Special Olympics National Summer Games visit  www.SpecialOlympics.org.nz