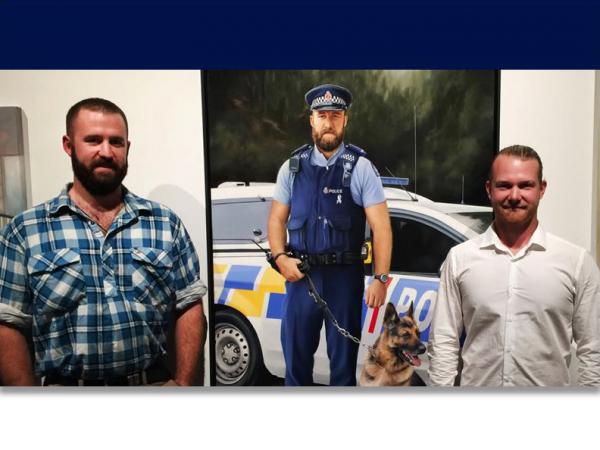 Home > News > Ten One Magazine > A ‘canvas’ of a different kind

When he wanted to paint a portrait depicting strength and community, Kapiti artist Marcus Ebbett turned to Police.

Since he was a young boy, Titahi Bay born-and-bred Marcus has been painting - and in the past three years has turned his passion into a professional career.

His portrait of Constable Rob Eastham, of the Kapiti-Mana Family Harm Team, was selected in the top 50 of 279 entries in the 2018 Adam Portraiture Award, New Zealand’s premier portrait competition.

“I really wanted the subject of my painting to be strong and thought-provoking and I thought ‘What better way to represent the community than a police officer?’,” says Marcus.

“They are recognised throughout the country and play a huge role in keeping our communities safe - it’s a hard job.”

Marcus visited Kapiti Police Station and asked Inspector Tracey Thompson, Kapiti-Mana Area Commander, if an officer would volunteer to sit for the portrait. Rob was around when Tracey put the call out and agreed to help Marcus out.

“Marcus and I met at a Children’s Cancer Foundation event that I helped organise in Whitby and we talked about the portrait,” says Rob.

“There were dog handlers and their dogs doing some displays for the children and Marcus decided he wanted to include a police dog in the portrait.”

“I was more than happy to offer Dog Section support to the portrait,” says Mark.

“It illustrates the different facets of policing and, while Rob isn’t a handler, he is doing a great job fostering one of our police puppies, Beau.”

Rob had five sessions with Ike and Marcus in a studio he shares with fellow artist Philip Markham. The portrait took more two months to complete and the Awards night was held in late February.

“Marcus is a very gifted artist and the level of detail in the portrait is amazing,” says Rob. “Ike was also happy to sit for the portrait — he is an awesome dog and is very successful operationally.”

Marcus, who works mainly in oil and water colour, describes his style as adaptable and realistic. As well as portraits, he has a passion for painting the New Zealand landscape.

“I am very privileged to be able to do what I love for a job,” he says.

“Having your portrait accepted into the competition is an achievement but to be selected in the top 50 finalists out of 279 entries is an honour.

“It was very humbling at the awards night to have people come up to Rob and I and tell us how much they loved the portrait - they picked Rob out of the crowd and instantly recognised him.

“It is great knowing that the rest of the public now get to see it when it goes on tour with the other 49 portraits.”

The exhibition is at the New Zealand Portrait Gallery in Wellington until 27 May, after which it begins a national 18-month tour.

“I’m proud to have been able to help Marcus out with his passion - it shows a different perspective of police work but one that is very much in line with engaging with and supporting our communities,” says Rob.

You can check out the portrait and more of Marcus’s work via his website - www.marcusebbett.co.nz

Previous
BEYOND PRAISE: After the storm
Next
Wahine 50 - the anniversary salute