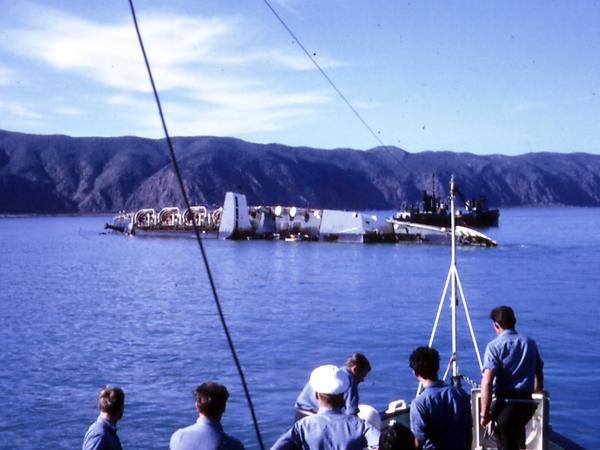 Home > News > Ten One Magazine > BEYOND PRAISE: After the storm

BY THE time the last survivors had reached shore, the storm had died down.

At Wellington Railway Station, work was under way to establish the identities of the survivors. It was no easy task – some passengers were travelling under false names, others on other people’s tickets.

In the evening, three Army Bedford trucks brought the bodies from Eastbourne to Wellington’s new mortuary. Senior Sergeant Peter Coster, in charge of the mortuary section, was there when they arrived. It was the first time he had got away from Taranaki Street since 7am.

The mortuary was built to accommodate 12 bodies – and it was fully occupied even before the ship sank. Extra rooms were pressed into service and post mortems were moved to Wellington Hospital to free up space.

Constable Robyn Brand was among 23 staff deployed to the mortuary. She and husband Geoff, also a constable, had worked the previous night shift but reported for duty when they realised the seriousness of the situation.

Robyn worked at the mortuary for more than 12 hours that night. “We were receiving the bodies, washing them, taking any clothes or possessions and ensuring they stayed with the person,” she says. “We were looking for anything that might help identify them.”

The mortuary was more than overstretched by the influx. “The conditions were very difficult but we were doing our utmost to treat these people with due respect.

“It got to the point where you basically switch off. It was so overpowering emotionally.

“There were other bodies there. That’s when I lost it, when they brought in the little girl killed by flying roofing iron. Most of the time, though, we put our emotions on the backburner.”

Robyn returned to normal duties but the mortuary shifts continued, scaled back, until all victims were identified, ten days after the sinking.

Detective Tom Stenhouse reported for duty the day after his stag night - a joint event with Paddy Doyle - and was assigned to the mortuary. "But I don't think I even saw any bodies," he says.

"I was involved in the lists of crew and passengers and reconciling them with who was lying next door who hadn't made it."

Tom had a personal interest, with his parents, two brothers and an aunt travelling from the South Island for his wedding in Napier the following Saturday. "I wasn't sure which ferry they were on," he says. "Later I found out they were on the next sailing, which was a relief."

The disaster did cause a degree of wedding disruption when his best man, Detective Peter Woodward, contracted pneumonia - and ruined his new wool suit - after wading into the sea to rescue passengers at Seatoun. A stand-in was found.

Despite the difficulties in the cramped mortuary, the system worked efficiently and no victims were mis-identified. The mortuary section earned a pathologist’s praise during the Court of Inquiry.

Peter Coster, however, was concerned about the long-term effects on staff, particularly a young constable employed at the mortuary as a runner. He was a promising officer, but soon after went off the rails.

“We know more now about post-traumatic stress disorder,” he says. “There were long-term effects and we weren’t sophisticated or knowledgeable enough to pick up the signs, though with hindsight they were there to see.”

While Robyn was on the mortuary shift, Constable Geoff Brand was out on the streets.

Peter had sent some staff back to barracks during the day to ensure a night shift was available – but, says Geoff, it was a very quiet night.

“I think another constable and I were the only were the only patrol in Wellington for the whole night shift,” he says. “Two of us driving around in a car through empty streets.”

AT WELLINGTON Central, Detective Sergeant John Cagney was switched from investigating two sudden deaths to compiling survivor lists – and he received help from an unexpected quarter.

“We were working through the night on it,” he says. “We were struggling – the list was doubled up in parts and not in the best of order.

“At about 12.30am Norman Kirk came in, with some others. He had been at the railway station looking over the survivors. He knew them all – he knew everybody in the seaman’s union on the inter-island ferries, the Wahine as well as the Aramoana.”

Kirk, then Leader of the Opposition and four years away from being Prime Minister, settled down to share what he knew about the names on the list.

“He helped more than anybody else did – he got our list into some semblance of order. He was the only politician who showed any interest in being helpful.”

Headquarters typist Frances McGoverne, fiancée of Detective Paddy Doyle, was also working on the survivor lists. Like Tom Stenhouse, she had a pressing personal interest – her brother Lionel was in the Wahine’s crew.

Paddy had been absorbed by a homicide inquiry during the day and it was only when he saw Frances poring over the list that he realised just how serious things were.

“Our wedding was the next week and, because her father was dead, Frances was going to be given away by Lionel,” he says. “He was working in the engine room, and she was looking for his name among the survivors. It didn’t come in until quite late.”

AS IS often the case in Wellington, the day following the storm dawned blue, calm and clear.

Away from CIB, John Cagney was O/C of the new Wellington Police Dive Team. Its six members had done their training at the naval dive school HMNZS Philomel a few months before.

They used their own diving equipment and had carried out a number of small-scale operations – now they faced a much bigger challenge.

“The next day there was a report that someone could hear knocking on the hull,” says team member John Bowman. They went out to the wreck on a university research boat, with a depth finder that showed they were still riding swells of up to 9 metres.

“There were still great big swells washing into the boat. We managed to surf up on to the side – I don’t know how."

They smashed their way in through a thick porthole window using the nozzle of a firehose they found on the ferry's deck. It took about half an hour, John Cagney remembers.

“Once we were in there we could hear it creaking when a wave hit it," says John Bowman. "We yelled out but there was no one there – it was just creaking.”

That was the first of several dives related to the tragedy.

“Soon after that we were instructed to go out again and, among other things, try and recover the radio log from the radio shack underwater in the centre of the ship,” says John Cagney.

It was a dangerous and difficult task. “The radio room was three cabins down under the water,” says John Bowman. “It was quite an obstacle course to get down to it.”

John Cagney descended to the radio room, with other squad members positioned above as a safety measure. The log was retrieved and played a major part in the subsequent inquiry.

“I nearly took [team member] Arthur Frost's head off in the process when I let go of a plank that was jammed in the radio shack, forgetting that he had his head out watching for me 40 feet above,” he says.

“Fortunately he saw it coming and dodged it, but gave me a hard time about it for the next 50 years.” Arthur Frost died last year.

On other dives, squad members were tasked with cutting loose life rafts still attached to the wreck. John Bowman carried out a dive with Evening Post reporter Keith Hancox. On another occasion he was asked to cut a sample off one of the propellers for the investigation.

The squad also dived on Barrett Reef, charting the Wahine’s course by the damage done to the rocks.

What they all remember is the fuel oil that coated everything - including them - and ruined their equipment.

“It was one hell of a mess,” says John Bowman. “There was 4-5cm of thick black fuel oil floating everywhere. It got through our wetsuits and eventually ruined them. We had to sponge ourselves down with kerosene.”

“There was a BBC reporter standing on the side of the boat doing a voice recording,” he says. “He was looking down into the water talking about the pathos of seeing a child’s toy floating past.

“Everything was covered in fuel oil. As I walked behind him I slipped and landed on my guts. As I hit the deck I let out a loud swear word. The reporter turned around with a pained look on his face and said ‘I don’t think the BBC can use that’.”

It was greatly aided by George Twentyman’s attention to detail and his insistence on creating a comprehensive and accurate paper trail detailing every decision and communication.

The court identified the build-up of water in the vehicle deck as the reason the Wahine capsized. It questioned why no one ashore had been alerted to the degree to which the ship was taking water.

It also questioned the timing of the decision to abandon ship, but concluded that more lives would have been lost if the order had come earlier, when the storm was more fierce.

The court’s report has a section headed ‘Gallantry’, which lists a number of individual actions. It acknowledges the “large number of unidentified police officers” who took considerable personal risk, but names no names.

There were no awards to individuals in Police. The courage of all those who put their lives at risk to save others was recognised when The Royal Humane Society presented its Gold Medal, which was accepted on behalf of all involved by Prime Minister Keith Holyoake.

The Historical Medal Society of Australia and New Zealand struck 39 silver medallions for individuals or organisations considered worth of recognition.

Two were presented to Wellington Police and two to Auckland Police, to recognise the national significance of what Police staff achieved in relation to the tragedy. The Wellington medallions are usually kept at the Maritime Unit base at Queens Wharf.

"Many heroic acts were performed by members," reads the citation accompanying the Wellington medallions. "It is known that at least 35 members imperilled their own lives to save others, and at least 22 other members worked long hours under shocking conditions to assist survivors."

George Twentyman compiled his own report, pulling together many officers’ accounts and a mass of facts and figures, maps, diagrams and graphs which tell the story of the day. It was the first police report of its kind and it set the standard for operations to come.

“With tragedy striking in such a manner, the resources of the city and surrounding areas were truly tested,” he wrote.

“That risks were taken, sacrifices made, acts of heroism performed, assistance unstintingly given (without being asked for or, if required, given willingly) makes one ponder on another old theme ‘adversity brings out the best in people’.

“Along with his fellow citizen, members of the police took risks – and this was particularly so on the eastern shore – worked long hours both in the field and in the office, and gave of their best, and this is a matter of which I am extremely proud.”

Go to the Wahine 50 Trust website for details of events commemorating the Wahine tragedy. There is a small display relating to the Wahine at the Police Museum.

Thanks to the many people who have made this series of reports possible, particularly the retired Police members who generously gave their time to share sometimes painful memories.

Beyond praise, each and every one.

Previous
BEYOND PRAISE: Tata and Hoppy
Next
A ‘canvas’ of a different kind