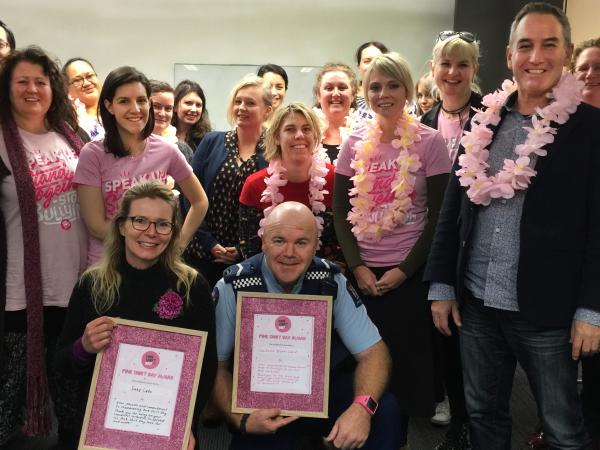 Senior Constable Bryan Ward has been declared a Pink Shirt Champion for his and his pal Bobby’s efforts to promote anti-bullying messages.

Bryan, a School Community Officer in Waitematā District, and children’s entertainer Suzy Cato were given certificates of thanks from campaign leaders the Mental Health Foundation for going above and beyond to help New Zealand be bully free.

It began in Canada in 2007 when two students defended a youngster who was being picked on for wearing pink. It encourages people to wear pink to send a message that bullying is not acceptable.

Traditionally Police staff around the country join youngsters and other community members to raise awareness about bullying, and what can be done when it happens.

“Obviously it’s an all-year thing, not a one-day thing, but on that one day we can do a lot to raise awareness,” says Bryan, has been involved with Pink Shirt Day since it came to New Zealand in 2009/10.

He says the day plays a real part in reducing bullying by getting people talking about the issue – and with more people than ever on board in 2017, the initiative is going from strength to strength.

“We’re getting bigger turn-outs from schools, and workplaces as well,” says Bryan.

“Even in Police, five years ago if you’d worn a pink shirt you’d be considered abnormal in some way but now it’s completely understood and accepted.”

To mark Bullying-Free Week 2017, Police made a series of social media

videos highlighting aspects of the problem – and these remain available for staff to use any time in their engagement with their communities.

The videos Dreamcatcher and Shadow focus on schoolyard bullying, with a strong message about what youngsters might do about it, while Mean Tweets features Police staff reading some of the less-than-flattering messages we sometimes  receive.

Dreamcatcher can be seen below. All the videos can be found on our YouTube bullying playlist - alongside other resources - by clicking the link below.

The school videos have been shared with the Ministry of Education for distribution to school communities. Mean Tweets was shared through Police’s national Facebook page and reached more than 1.8 million people, gathering media attention at home and overseas.