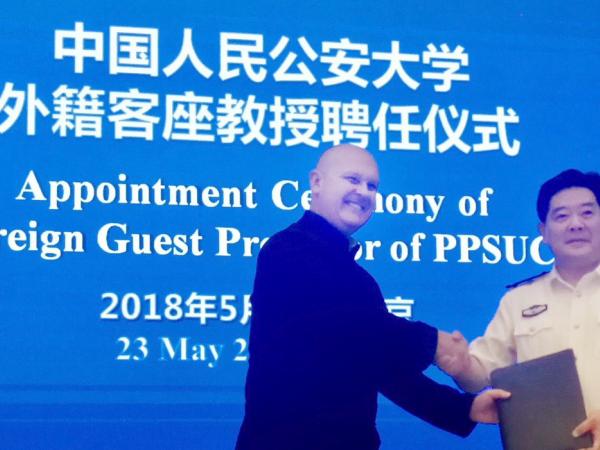 As he prepares to bring down the curtain on eight years as our man in Beijing, Assistant Commissioner Hamish McCardle has received a rare honour from his hosts.

He has been appointed Visiting Professor at the People’s Public Security University of China – the first foreigner to hold such a role.

The university is where China’s Ministry of Public Security (MPS) trains the elite of China’s police.

The appointment includes the opportunity to return each year to teach both undergraduates and advanced classes. Hamish says he plans to spend two weeks each year teaching in Beijing.

“It’s always a great honour to be asked to share your opinions with fellow learners, so on a personal level I’m humbled by the award,” he says.

“It will provide a wonderful opportunity to share ideas in both directions, develop a New Zealand and China awareness and foster an alumni of the university with some Kiwi characteristics.”

Hamish holds a Master of Laws from a different Chinese university - the China University of Political Science and Law – but has had regular contact with the Chinese Public Security University, and has presented to senior courses there since 2011.

The university and the Royal New Zealand Police College have had a bilateral training relationship since 2016.

Since being posted to Beijing as Police Liaison Officer in 2010, Hamish has been central to the developing relationship between investigators here and in China, with a focus on disrupting the flow of drugs and precursors to New Zealand.

He leaves China in July and takes up the position of Assistant Commissioner Strategy and Performance, based at Police National Headquarters, in August.

He says the university appointment is an endorsement of the healthy state of the New Zealand-China bilateral relationship, and “underscores the idea that New Zealand has values and ideas worth considering in the Chinese context”.

It also aligns with the aims and values of the New Zealand-China Friendship Society and the pioneering work of New Zealander Rewi Alley who fostered a life-long friendship with China from the 1930s.

“China’s role on the global stage has never been more relevant, and it’s important we understand China, and for China to understand us as distant Pacific neighbours,” says Hamish.

“One of my roles as a visiting professor is to continue to act as bridge for cultural exchanges between our societies.

“This is important work for both countries, in trading relations naturally, but also in law enforcement and criminal case cooperation as well. I’m looking forward to this new challenge as one that can develop step-by-step over the years.”

“This role will have some great advantages in the overall relationship development with MPS and New Zealand over the long term,” says Superintendent Brett Kane, National Manager International Services Group.