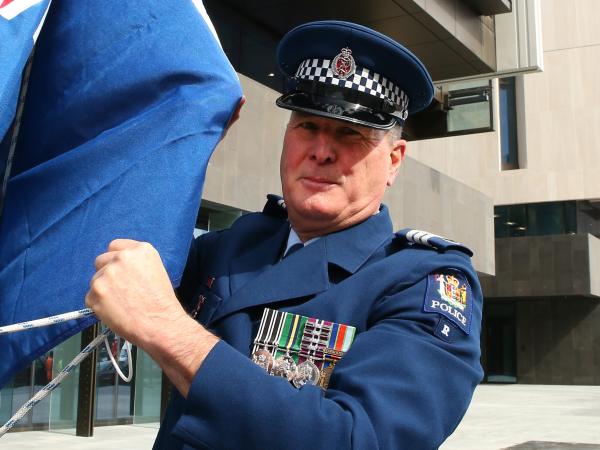 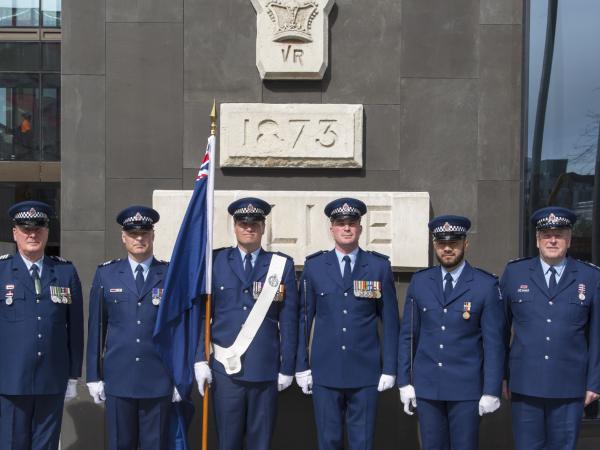 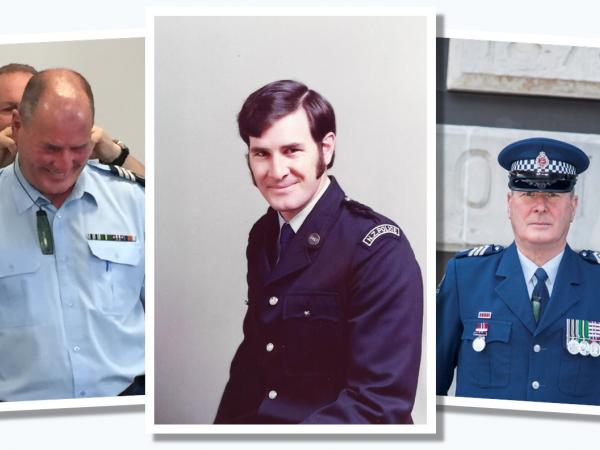 Home > News > Ten One Magazine > Dave bows out but marches on

Sergeant Dave Harvey has retired after 47 years with Police – but he’s not hanging up the uniform just yet.

Dave will still parade in his Number Ones as Dave Harvey, Sergeant (Ret) with Canterbury District’s colour party - and took that role for the first time post-retirement at the opening of the Justice and Emergency Services Precinct last week.

He donned his first Police uniform – black back then - with No 47 Recruit Wing in September 1970.

He was posted to Dunedin, then his home town Blenheim, before moving to Christchurch where his grandfather had served in the city’s first police station. He was promoted to Sergeant in 1983 and he and wife Claire moved to Wellington.

Dave remembers the early 80s as a time of great change, underlined by policing duties at flashpoints such as the Marsden Point lock-out and 1981 Springbok tour.

“The tour was a pivotal moment in New Zealand history,” he says. “It changed people’s view of Police - sadly not for the better.”

Police found themselves holding the line against “intelligent, articulate, law-abiding citizens”. For Dave that involved arresting Trevor Richards, chairman of Halt All Racist Tours, for obstruction in Wellington. “He was a nice man, trying to put his point of view,” he says.

In 1991 Dave and Claire returned to Christchurch, where he helped train a VIP squad. In 1992 he became OC at Hurunui, covering a swath of rural North Canterbury. He held the post for 17 years.

Policing took its toll, however, and in 2000 Dave suffered post-traumatic stress which left him off work for three months.

“It was too many suicides, plane crashes, drownings; a combination of things you could have dealt with individually but they all rolled up together and I just couldn’t see any way out.”

With the help of Police’s welfare and trauma counselling services he returned to work, a changed man.

Dave served in the Solomon Islands in 2007-8. In 2009 he became Canterbury’s District Workplace Assessor, coaching and mentoring 253 probationary constables.

“Quite a number are now sergeants and detectives - it’s very cool to be part of that.”

When the earthquake struck on 22 February 2011, Dave was on the 8th floor at Christchurch Central.

He first went to help rescue survivors from the Grand Chancellor Hotel (“through the heroic efforts of Smith’s Cranes – mention Smith’s Cranes”) then to the CTV site to join colleagues recovering bodies.

“I couldn’t believe it - that line of body bags, all full. Then going and recovering more. The next day we went back and did the same thing.”

Dave was aware of the earthquakes’ long-term effects on colleagues when in 2013 he became District lead in the new Early Intervention programme, designed to catch issues early when staff were struggling.

He became Police’s busiest EI lead, helping more than 100 colleagues. “That’s what police work is all about – helping others, workmates and the general public.

“If someone asks ‘Would you do it all again?’ I say without hesitation ‘You bet!’ I’d recommend any young person to give policing a go. It’s incredibly rewarding.”

Dave is looking forward to spending more time on his lifestyle block, scuba diving and sailing – but he will be out in his Sergeant (Ret) Number Ones on Remembrance Day this month and other ceremonial occasions.

He says his military experience as a lieutenant in the Territorials contributes to his enjoyment of colour party duties, but credits colleagues Constable Tony Hickland and Sergeant Paul Robertson for the quality of the drill.

Dave says the role gave him one of the great privileges of his career, taking part in his colleague and friend Senior Sergeant Richie Ryan’s funeral.

“It was an honour to be part of that and a privilege that I’ll be able to continue.”