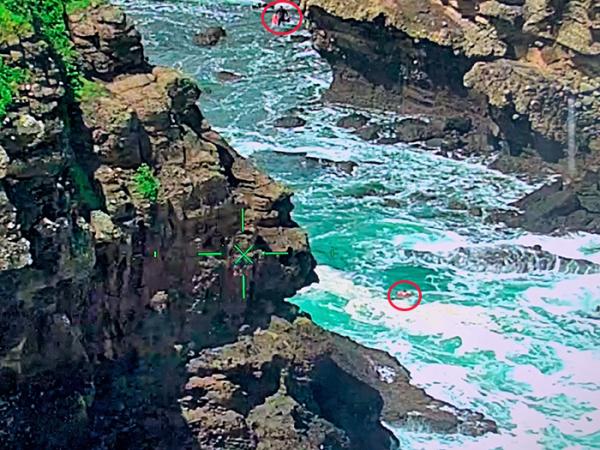 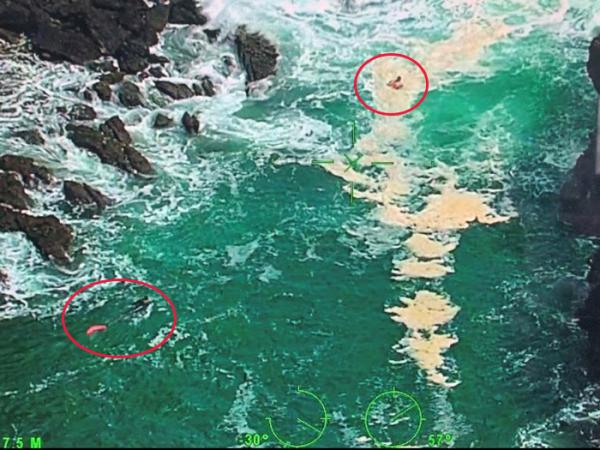 Officers' quick and decisive action helped save a fisherman's life after he was washed out to sea.

Someone raised the alarm and reported a man being washed off the rocks at O’Neill’s Bay on the West Coast of Auckland on Friday (08 October).

The man wasn't wearing a lifejacket and although his friend had thrown him a life ring and he was still afloat, he was being knocked around in the rough waters and was tiring quickly.

Eagle crew Senior Constable Mark Lendrum, Constable Jason Farrell and their pilot were quickly on the scene and spotted the man caught in a rip. 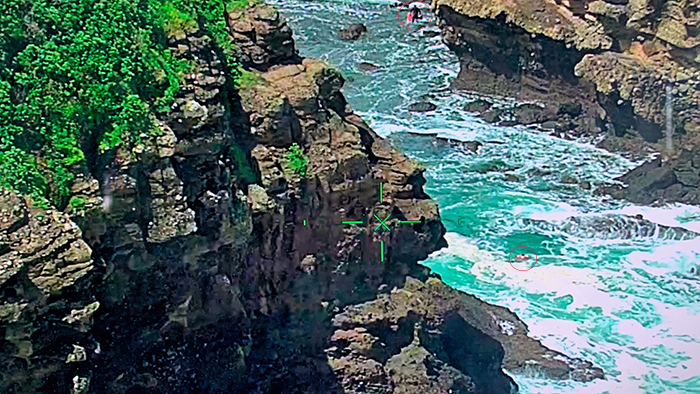 Senior Constable Mark Lendrum (circled, top) making his way round the headland to help the man.

“The Eagle-eyed pilot spotted the man in the ring within a narrow channel between Kauwahaia Island and the headland,” says Sergeant Mark Jamieson.

“The man appeared very distressed and was swallowing water. He was getting swamped by the waves and would go in slightly when the waves crashed on him and then he would be taken back out with the rip.”

Once they landed on the beach, Mark grabbed the rescue tube and flippers and headed out.

As he made his way around the rocks on the headland, he noticed the man had been pushed further out to sea and was now covered in foam and getting buffeted by the waves.

When the surf and rocks prevented Mark getting any further on land, he decided to swim out to him.

“He was in immediate danger and I could not delay the rescue,” says Mark.

When he reached him, the man was exhausted, very pale, had foam coming from his mouth and could not speak.

Mark towed him back to shore, still in the life ring, with the help of a surfer who turned out to be an off-duty police officer. He'd been on the beach when he saw the Eagle land, realised something was wrong and paddled out to assist. 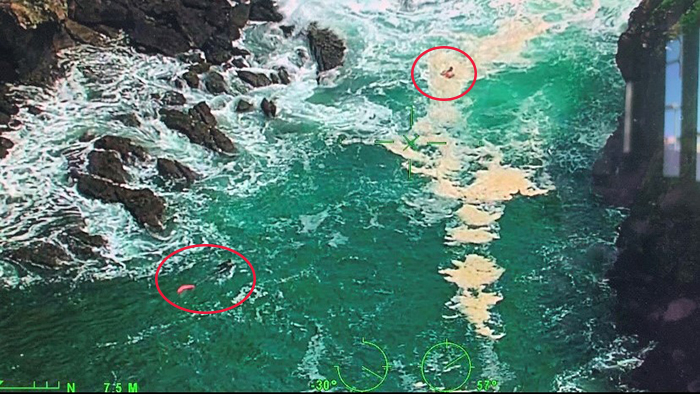 Realising the immediate danger the man (circled, top) was in, Mark braved the rough conditions to swim out to him.

When they got the fisherman to shore, he was in a serious condition so he was transported to nearby Bethells Beach where lifeguards helped with his first aid treatment.

“He was later transported to hospital by Westpac and is very lucky to be alive,” says Sergeant Jamieson.

“Having the ability to be not only be the first responders to quickly attend the scene, but also having the skills and courage to deploy no doubt saved this man’s life," she says.

The dramatic rescue is a reminder of the importance of water safety.

Since alert levels have changed in the Auckland area Sergeant Garry Larsen says there have been a concerning number of reports of kayakers or swimmers in trouble and fishermen being washed off rocks.

"Sadly, in some of these cases, people have lost their lives," he says. "So we're really urging you to take extra care when you're out on the water."

This includes paying attention to the following water safety guidelines and having a plan for if things go wrong.