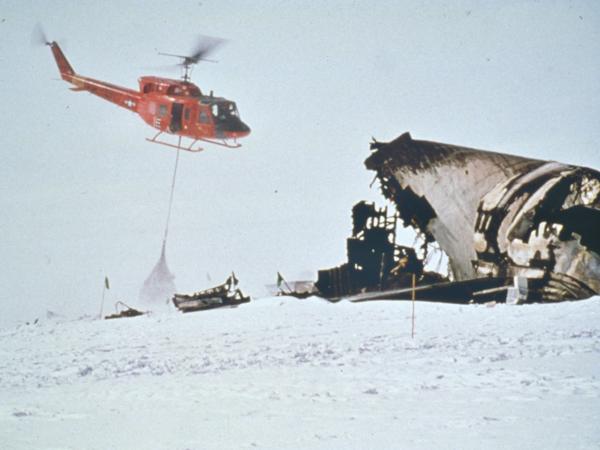 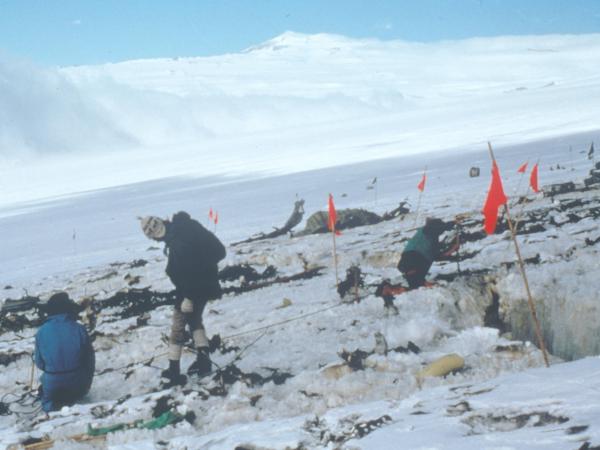 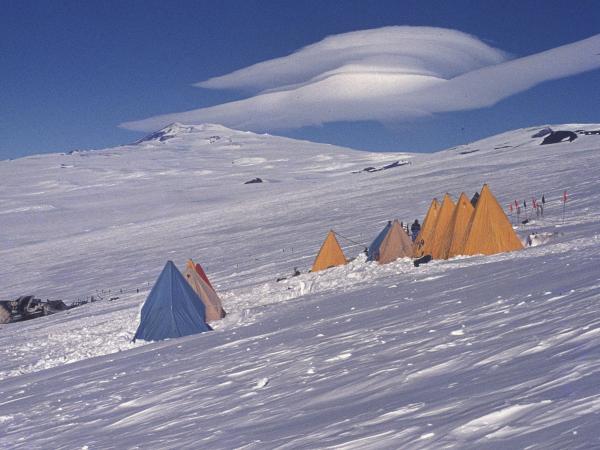 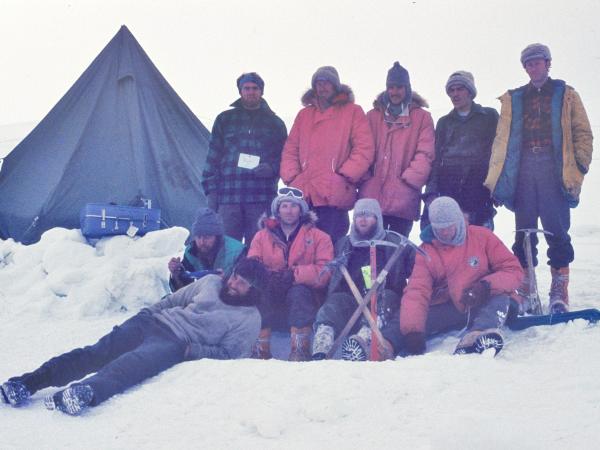 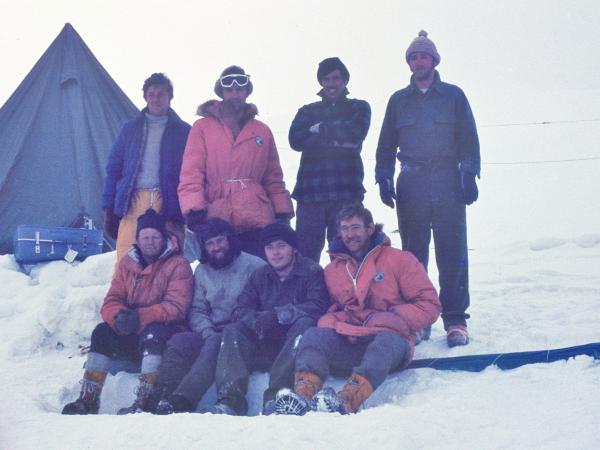 Home > News > Ten One Magazine > Erebus part 2: The best of our endeavours

They started body recovery at 2am on December 4.

Before that Greg, Stu and new arrival Constable Bruce Thompson had to sit out a storm which saw a temperature of -40 degrees with wind chill and had them sheltering nervously in their tents wondering whether they’d survive. Once it abated they were joined by US Navy photographers and three more police officers.

Arrivals and departures were constrained not only by weather but also by the helicopters’ size. Double-crewed, they could only carry three passengers.

The new arrivals gave Greg two teams, each comprising two police, a mountaineer and a US Navy photographer. All played a part and despite their designations were, as Stu puts it, de facto police officers.

Both Greg and Stu pay tribute to the photographers who, despite being young and probably not having seen a body before, pitched in and helped retrieve bodies and manoeuvre them into body bags.

That presented another issue. The bags weren’t designed to hold bodies frozen into abnormal positions with limbs in all directions. And then there was the smell. Despite being on the frozen continent, leaked antifreeze from TE901 was reacting with sunlight and causing some bodies to thaw.

Recovery started at the bottom of the crash site, using the grid map which Greg had transferred to paper while stuck in his tent during the storm. There weren’t too many bodies there because the aircraft bellied in and broke up as it ploughed up the slope, throwing those on board out as it went.

“We cleared those bottom seven rows early to save walking up and down, which was very tiring.”

That first shift lasted 16 hours and saw them clear 56 of the 92 grid squares, recovering 47 bodies.

“It was too long but we were determined to make a start and deliver results. By the time we got to the end we were really struggling.”

Progress on shift one made the task seem not only achievable, but perhaps able to be done more quickly than they’d anticipated. Weather permitting.

They were also aware of December 14 as a looming deadline – it was the last day the runway at McMurdo was safe for flights.

Before that, however, Bob Mitchell decided Greg and Teams One and Two should return to McMurdo for a night to recharge and phone home. They returned in the choppers which had flown Teams Three and Four and their site co-ordinator, Christchurch Sergeant Mark Penn, on to the mountain.

Back at McMurdo it was suggested that because of the stress involved Teams One and Two had played their part. However Greg made the case for them to continue, as they were all determined to do. They did, returning to the mountain where they found the new teams had made good progress.

The 24-hour daylight gave them the opportunity to work around the clock, so they decided they’d run back-to-back 12 hour shifts with Greg’s teams alternating with Mark Penn’s. One and Two would start at 6pm, Three and Four at 6am. While they all had daylight, the nightshift was definitely colder.

December 5 was the first full day for Mark Penn’s teams. His onsite log paints the picture.

0130. Both teams stop for smoko. Team 4 still working on cabin site and recovered 12 whole bodies out of this area. At this time they have not finished. Team 3 have recovered 13 part and whole bodies. Still in Sector 18.3, Am going to move part bodies from their sites to the outside of the crash site as choppers are blowing away too many tags and flags….

06.15. Finished for the time being – we are all very tired and making small errors. Everyone happy to stop and soon have sleep.

“We felt we were going to finish the recovery faster than we anticipated because of the way the teams were processing the bodies,” Greg says.

“It makes it sound easy when I say that but it wasn’t. It was gruesome, tiring and hard work physically, chipping the bodies out, photographing and marking them in position then moving them to the side of the site.

“We had to follow the process and do it right. But there was that ‘let’s get on with it’ attitude that’s typical of New Zealanders.”

They adapted as they went along. Constant predation by the skuas led them to stack bodies in tens on slings at the side of the site, then cover them thickly with snow so the birds couldn’t get to them before the helicopters did.

And there were many trips back to their campsite for a cuppa “which was one way of getting away from it. But each time you had to really steel yourself to go back down and face it again.”

Everyone worked pretty much to the point of exhaustion, Mark says. “Speaking personally it was damned hard not to make mistakes because of tiredness.”

It was also difficult recording and writing onsite “as pens freeze up and while recording you have to help dig out parts and bodies,” he noted.

Food was a constant worry – there wasn’t a lot of it. But the mountaineers, in charge of cooking as well as helping with recovery as required, seemed to rustle something up for every meal.

From Mark Penn’s log: 6/12 at 21.35. Last body on site packed. Three were found under the fuselage, which we thought we would have to jack up. However we shifted it by muscle-power and slid it downhill. There are no bodies left in main fuselage. They too have all been got.

There was a very heavy concentration of bodies in the top sections, where the fuselage lay. Mark and his teams were working this part of the site, but all four teams worked together to complete the task. Mark says the last 36 hours were a constant blur of activity.

By the time they finished on Friday December 7, they had recovered 347 bodies – more than the 257 on board because each body part is counted as a whole.

The last to be recovered was that of a young air hostess, still in uniform and hardly marked.

“We recovered every body that was visible or possible to recover on that site,” Greg says. “We moved large pieces of wreckage.. and any bodies down crevasses, the mountaineers and Mark, who had that ice and snow experience, would go down.”

They were all keen to get back to McMurdo. The job was done. But once again the weather closed in and helicopters couldn’t transport bodies, or the teams, out until Sunday 9. The wait was both miserable and very trying.

Greg remains really proud of the professionalism of their work and their recovery rate, still a benchmark in DVI. And he quotes a McDonnell Douglas engineer onsite, with experience at many other plane crashes, who was “full of praise. He couldn’t get over how well we were doing the job, and how quickly.”

“It was an incredible effort in very, very traumatic and physically difficult circumstances and demanding conditions, done without any injuries to the team.”

“The success of the operation on the mountain was due to the efforts of a small group of DVI-trained officers helped by the mountaineers, the US Navy photographers and other support personnel who all worked in cooperation together.”

Stu says the same. “A small group cleaned up in about eight days. It was a tremendous effort from a small bunch of people – done the Kiwi way.”

Despite telling the story many times, Greg says it still gives him goose bumps. “I steel myself to do it because it does still affect me. Erebus has never left me really.”