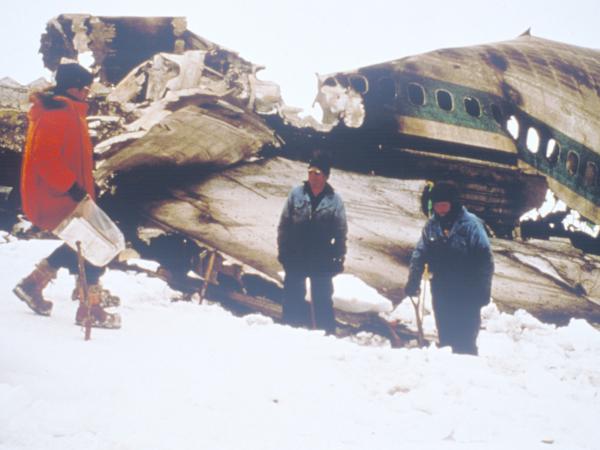 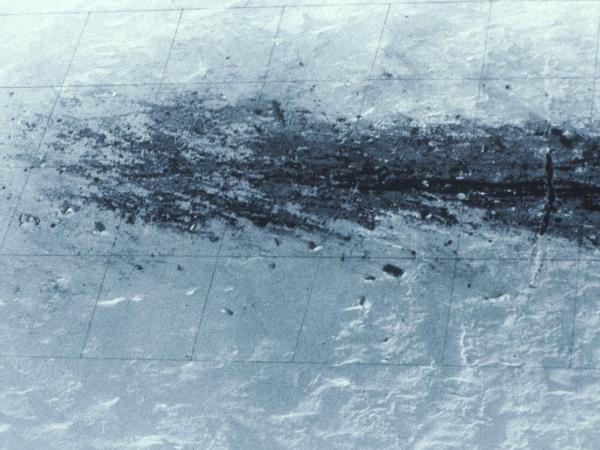 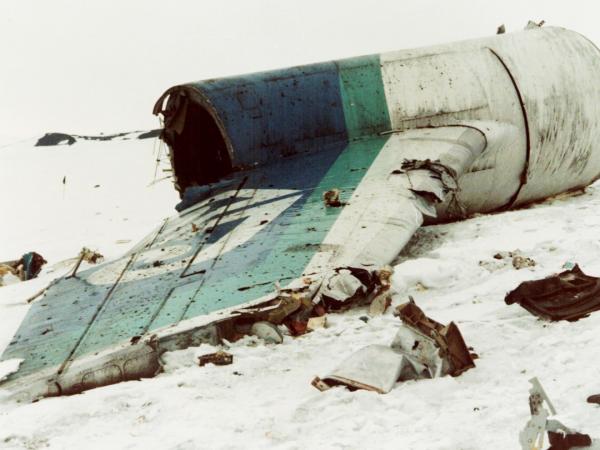 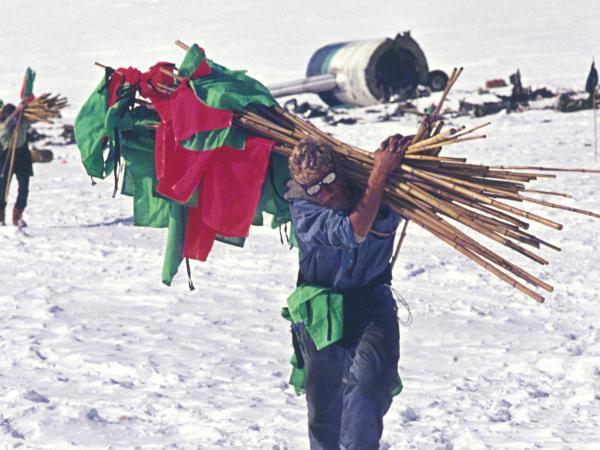 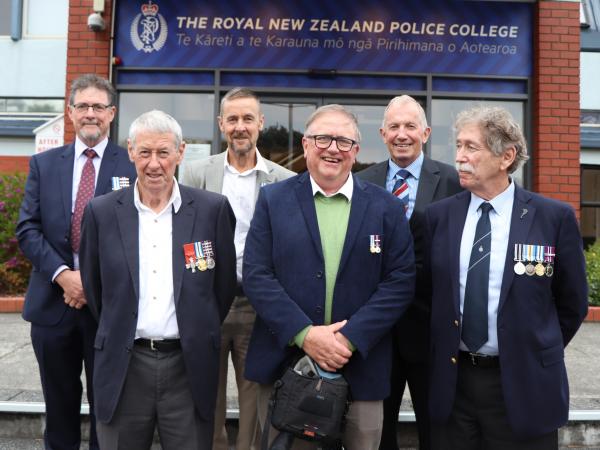 Home > News > Ten One Magazine > Erebus part 1: Into the unknown

This is the first of a series of four stories commemorating Operation Overdue, the New Zealand Police response to the crash of Air NZ Flight TE901 in Antarctica on 28 November 1979.  These stories would not have been possible without the generous co-operation of those who shared their often troubling, sometimes painful, memories.

This series is dedicated to them and all who served on Operation Overdue; to the mountaineers and US Navy photographers who worked with our people on Mt Erebus; the pathologists; fingerprint technicians; dentists; embalmers; photographers; and Defence Force personnel who worked alongside Police staff on the mortuary phase; and to partners and families who have also lived with the effects of this tragedy.

Forty years ago this month, Sergeant Greg Gilpin took an early morning call which would come to define not only the next two weeks but a large part of his life.

He’d worked a late shift at Wellington’s Taranaki St station on 28 November 1979, during which his senior mentioned an Air NZ DC10 was overdue on a flight to Antarctica.

The sightseeing flights had started two years earlier, leaving Auckland in the morning to spend a few hours flying over the Antarctic continent before returning to Auckland via Christchurch in the evening.

Many New Zealanders, worried about the missing flight, didn’t sleep much that night, Greg included. Then at 3am he was phoned to say the plane had been found on Mt Erebus, there were no survivors and he was on standby to go down.

He’d wondered whether he might be called on, but thought his lack of snow and ice experience might rule him out.

However in his favour was Disaster Victim Identification (DVI) training, introduced months earlier after a fatal train crash in Australia which prompted recognition of the need to handle disasters with multiple fatalities. The training included practice with dead sheep, at the Rifle Range in Trentham.

Later that morning Greg and other DVI-trained officers - including Lower Hutt Constable Stu Leighton - met at Wellington Airport. With Inspector Bob Mitchell, one of two architects of the DVI training and OC of the Ice Recovery phase of Operation Overdue, they boarded a Hercules for Christchurch on the first stage of what remains New Zealand Police's biggest DVI operation.

Greg had thrown a few big jerseys in a bag, while Stu’s flatmate/brother phoned around a few friends to borrow warm gear. Better clothing came from DSIR’s Antarctic Division where they were kitted out more appropriately.

As they flew towards McMurdo the pilot drew their attention to Erebus, and the crash site in the distance. “It looked just like a slight black smudge on a sheet really,” Greg says.

Appointed site coordinator by Bob Mitchell, Greg says he had little idea of what conditions to expect. He envisaged steep mountain slopes and wondered how he’d manage to hang on to ropes, look after staff and do the job.

Stu was also a snow and ice novice and, like Greg, imagined they’d be roped together on the mountain retrieving bodies. He was also young – just 22. “I was very, very apprehensive,” he remembers.

The first few days of briefings at the American base at McMurdo Sound included photos Bob had taken on a flyover of the site and, to Greg’s relief “it wasn’t as steep as we thought – only a 14 degree slope.

“But it was full of danger – crevasses, pieces of jagged metal, holes, storms blowing in and out all the time."

Next came ice training with Scott Base personnel, after which the daunting task ahead seemed more manageable. There was also the reassuring presence of some very experienced mountaineers from NZ Face Rescue.

Meanwhile time was passing. “It was pretty frustrating those first few days because all we wanted to do was get up there and get on to it. The whole country was waiting.”

It wasn’t until December 3 that Greg, Bob and Stu flew to the crash site. Despite clear conditions when they left McMurdo, at Erebus it was whiteout. When a break in the weather came the helicopter pilot, used to fast-changing conditions, told them to go for it.

“We had to jump on to a slope, not knowing how far below it was, with the downdraft from the rotors sending snow flying everywhere. We ended up sliding a fair way down the mountain,” Greg says.

Their DVI kits, in cardboard suitcases which would later disintegrate, slid even further. But that slipperiness proved to be a blessing. “Some of us tied bits of twine to the handles and slid them around because they slid so well.”

Greg had 14 years’ policing experience, including time with the fatal motor accident squad.

Stu had also seen a fair few bodies in his four years. But what they faced on Mt Erebus was the carnage of what was then the world’s fourth-biggest air crash.

“It was total destruction,” Greg says. “Human and machine. There were few intact bodies. And it was hard to take in that such a big aircraft could disintegrate into such small pieces.”

“No amount of service can prepare anyone for that sort of scene,” Stu says. “We were in the coldest – 40 degrees wind chill - most remote part of the world with a disintegrated DC10”.

Surveyors and mountaineers had grid mapped the site, 700 metres long and 120 metres wide, on Bob Mitchell’s instructions and divided it into 30-metre squares marked with black flags on bamboo stakes.

Red flags meant danger – like the crevasses which the mountaineers, the safety overseers, told them to avoid without their guidance. Green flags marked bodies.

As they walked around Greg moved from feeling overwhelmed to believing the goal was achievable. “We can do this,” he told Bob, who was about to return to McMurdo. “I knew that with the safety oversight from the mountaineers we would get the job done, even though we were going to have to chip the bodies out of the ice, and remove some from under the wreckage.”

The scene was undeniably gruesome - not least because of the highly predatory dive-bombing skuas - and dangerous as storms swept across and sent jagged metal flying. Greg and Stu had only their tents for shelter. The storms would also redeposit snow, covering previously located bodies and uncovering others.

But they had a plan, and they had processes.

“We just got on with it,” Stu says, “as thoroughly as we could and to the best of our endeavours.”

Next story - Erebus part 2: The best of our endeavours

Previous
Erebus part 2: The best of our endeavours
Next
Erebus: Making peace with a mountain