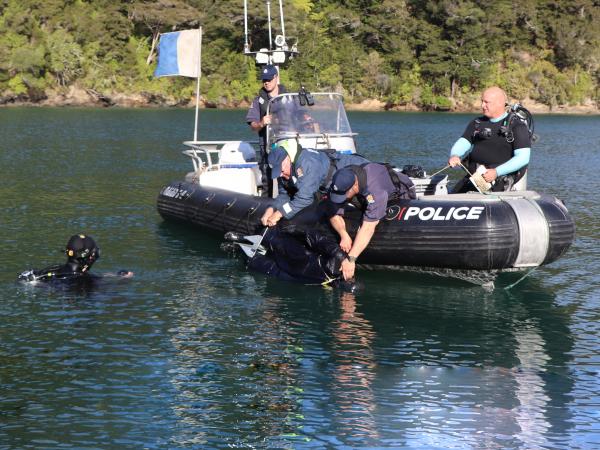 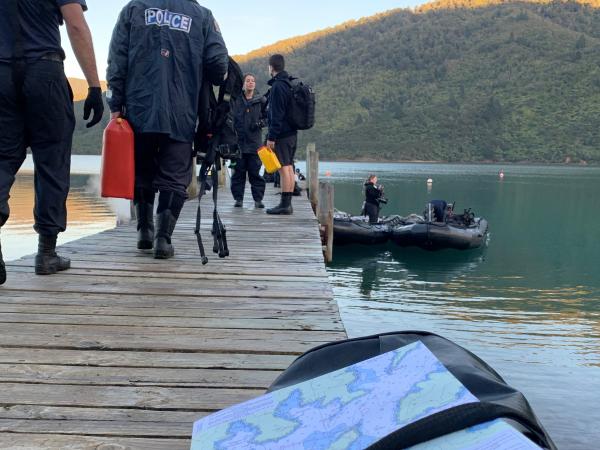 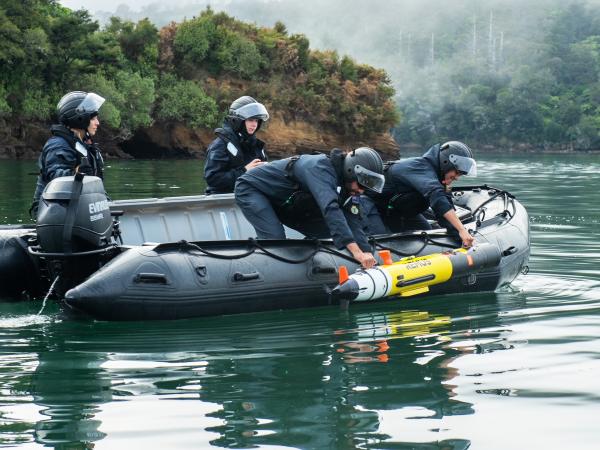 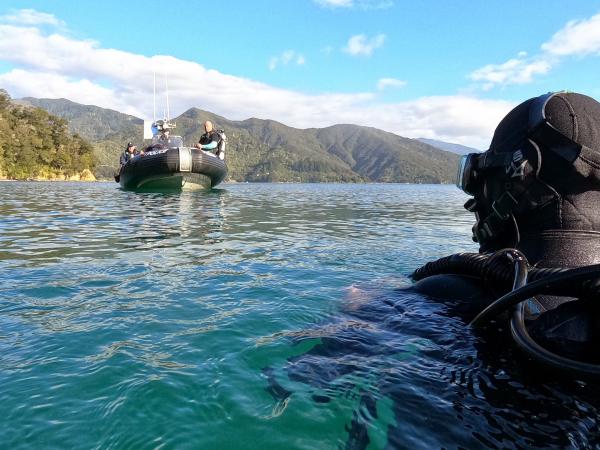 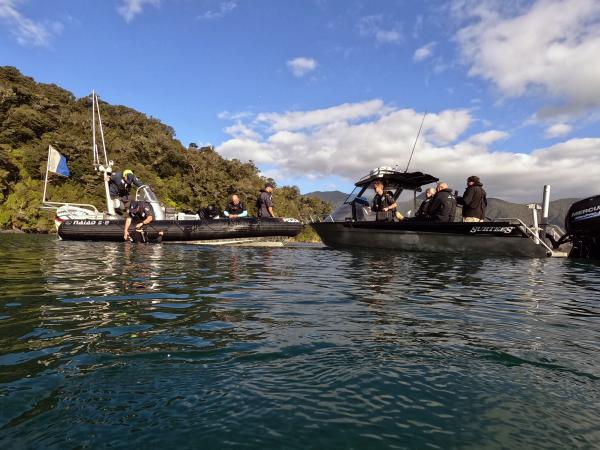 When Police National Dive Squad and Maritime members headed to the Marlborough Sounds to take part in Exercise Bushnell, Police Senior Media Advisor Jill Reid was with them. Here is her account.

The sun was out and there was not a breath of wind when we arrived at Waikawa jetty near Picton.

I was travelling with two Police National Dive Squad (PNDS) members and two Police Maritime skippers, heading to Endeavour Inlet to meet up with the Navy AUV team.

Exercise Bushnell - run by the New Zealand Defence Force - involves Navy and Police teams in a series of scenarios including the grim task of recovering a missing recreational diver - in this case, a shop window mannequin, which belongs to the Navy.

We heaved bags and gear on to Police Alpha, fuelled up - accidently dousing my gear bag with two-stroke - and we were off to drop targets into nearby inlets for the next day’s first exercise.

After about 20 minutes we arrived at Anakiwa, near the Outward Bound camp, dropping the first target - an old rifle - about 200 metres offshore, 11 metres deep.

Then to another inlet with a propeller – tagged and labelled and dropped to about 15 metres. We then headed off to Endeavour Inlet to check-in.

We were greeted by Navy staff who helped hump our gear up a greasy hill to our accommodation - a cross between a family bach and a small-town campground cabin.

I got my own room, as did two others – a commanding officer and the most important person, the Navy chef. The rest of the workers shared a dozen or so bunks and one small bathroom downstairs. I wouldn’t need my earplugs after all.

Three naval personnel were prepping their technology for the next day. The AUV team or Hydrography Group were engrossed in this and ‘slushies’ – helping the chef prepare dinner.

The Hydrographic Group, from HMNZS Matataua at Devonport Naval Base, can respond at short notice, with state-of-the-art Autonomous Underwater Vehicles (AUV) that can remotely dive to significant depths under the command of a team member using a control panel and video screen.

The Navy unit brought a 7.5m boat named Pathfinder and two REMUS AUVs, capable of electronically detecting underwater objects and relaying sonar images back to an operator, onshore or in this case aboard Zodiac inflatables.

The REMUS - Remote Environmental Monitoring Unit - looks like a small torpedo, and its ability to dive to 30 metres-plus helps Police during search and recovery exercises in deep water.

Chief Petty Officer Coady Clark, of the Navy’s Military Hydrographic Group, is well aware the pressure’s on when Police asks them to help.

“A missing diver is a tragedy that will have a devastating impact on friends and family,” he says. “We do everything we can in the shortest amount of time using our specialist equipment to find the person and have them returned to their loved ones.”

"These are never easy tasks for anybody involved – particularly the family of the diver – but it’s because of the families that our dive team and the Navy’s hydrographers are doing this training.”

Day one of Exercise Bushnell was sunny and crisp and a 7am hot breakfast set us up for the day. My equivalents from Defence Public Affairs included a communications advisor, a videographer and a photographer wearing dive gear who had capability to film underwater.

We filmed the AUV teams operating the units and the Police team diving and recovering the targets over the course of the day.

The hydrographic specialists’ job after the exercises was to view the sonar playback, noting points of interest, carrying out a post-mission analysis (PMA) and providing a written report to PNDS. It was our job to capture all this while balancing on the back of Pathfinder in the chop.

Once the targets had been identified, divers took turns locating them and bringing them to the surface.

We returned to our accommodation in Pathfinder in rather hair-raising conditions - whitecaps and sea spray and a new respect for our Navy skipper.

I returned to Picton on day two knowing that this training hones skills that allow the teams to recover people who have been lost to any water.

In live situations, two to six Police divers are called to each job, which can last hours or days.

The squad spends most of its time on evidential searches. Sometimes these involve technically difficult underwater video work which is used as evidence.

“That’s not all bad, given the squad works throughout New Zealand. Enlisting help locally for jobs makes sense.

“The Police National Dive Squad is made up of existing police officers who have regular duties in addition to their dive work and training.

I head back to Wellington, struggling to manage my sea legs, my bag still smelling of two-stroke, knowing these teams are practised, ready and willing when the call comes, when all other efforts to find the missing have been exhausted.