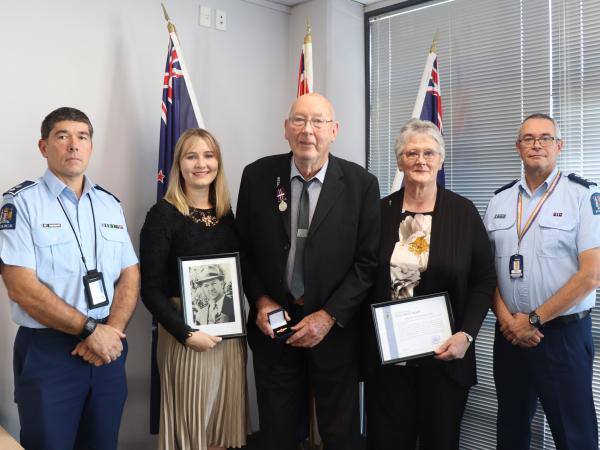 ​Seventy years ago, Ōtaki Sergeant William Shore Hughes made the ultimate sacrifice while protecting a local family and he was recognised for his great courage with the Commissioner's Gold Merit Award.

On Thursday, the 70th anniversary of the incident, Central District Commander Superintendent Scott Fraser presented the award to William’s son Graeme and his daughter Shelley and granddaughter Alice, at a ceremony at the Palmerston North Police Station attended by the Hughes family, local police staff and members of the Ōtaki community.

On Sunday 27 May 1951, William was the only police officer on duty at Ōtaki. The constable from the station had been sent to Wellington to help with the Waterfront Strike.

William was shot and killed while attempting to protect three women and two teenagers at a local house, from a man armed with a shotgun.

Although incapacitated from being shot in the left arm, he managed to barricade the house to protect the occupants and tried to disarm the gunman. However, the gunman was able to smash his way inside, where he killed William and one woman, before killing the other two as they attempted to escape.

The teenagers were successful in their escape. The offender then committed suicide.

District Prevention Manager Inspector Brett Calkin spoke at the ceremony and says William laid down his life in the face of a most determined armed offender.

“William displayed great courage. His actions placed him in grave danger in an effort to protect members of the public at the cost of his own life,” says Brett.

“Even after sustaining a gunshot wound, he continued to fight to save the lives of everyone in the house.

“William acted in the highest traditions of the New Zealand Police, he gave his life to save the lives of others. There is no greater sacrifice that a person can make.”

The award nomination for William was submitted by Rowan Carroll, Director New Zealand Police Museum, and her team and is part of the New Zealand Police Recognition Project – an ongoing initiative to ensure that all members of Police who have died in the course of their duties are properly remembered.

“I always wondered about William, who lost his life trying to protect a family in Ōtaki in 1951,” says Rowan. The more I looked into his death the more I felt that his bravery was exceptional, and yet he never received a bravery award.

“These were all good men performing brave deeds that cost them their lives. But was Sergeant Hughes’ bravery any less?”

The Hughes family are grateful for the interest that Rowan has taken and thank her for her work to get to this day.

Due to the time that has elapsed since the incident, the Gold Merit Award is the highest honour that William can be awarded.

Several factors led to William’s sacrifice not being formally recognised at the time, including the 1951 Waterfront Strike and the unexpected death of Police Commissioner John Bruce Young.

Sergeant Hughes joined Police in 1925 and after three years in Wellington he transferred to Stratford and remained there for 13 years. In 1948, after a brief tenure in Rotorua, he was promoted to Officer in Charge at Ōtaki.

Described as a keen sportsman, William was the president of the Railway Bowling Club and enjoyed coaching at the Rahui Junior Football Club. The Ōtaki community at the time praised him as one of the most popular policemen stationed there.

William was a proud husband to Estelle and they had two sons, Graeme and Ron.

His funeral service was held at the Ōtaki Anglican Church and was attended by the Minister of Police, the Police Commissioner, the local Member of Parliament, the Police Superintendent of both Wellington and Palmerston North and numerous senior police officers from across the country.

Brett says the incident was tragic for everyone involved but tragedy has a way of creating heroes of everyday men and women.

“In the face of real adversity, one’s true character emerges and is laid bare for the world to see,” says Brett.

“William’s bravery was in the highest traditions of the New Zealand Police. We acknowledge that 70 years have passed, but such deeds should be recognised and never forgotten.”