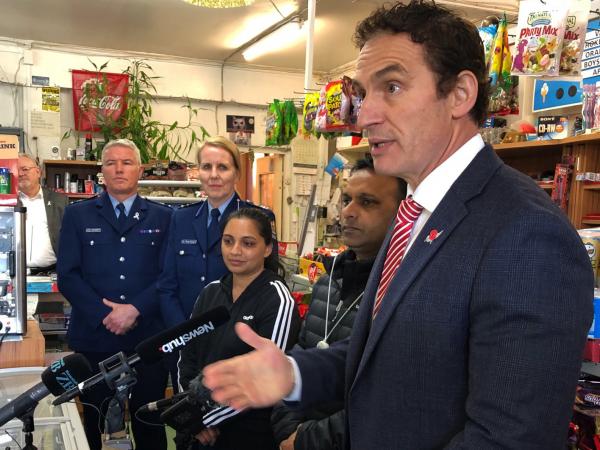 Chandrakant Patel was a very happy man last week as the superette which he and wife Priyanka run became the latest to have a fog cannon installed.

The fog cannon - officially commissioned by Police Minister Stuart Nash at the Patel’s superette in Titahi Bay, near Porirua - is the 500th installed as Police work with small businesses to deter aggravated robberies, prevent harm to potential victims and limit property loss.

It was very reassuring, Chandrakant said, for himself and his family. While they have not had any major incidents at the superette, there have been many smaller incidents and issues which he thinks the fog cannon will help prevent in future.

When triggered in the event of a robbery, the devices emit a non-toxic vapour and a high-pitched noise.

Minister Nash said the fog cannons already in place in dairies, liquor outlets and petrol stations around the country were working as intended – disorienting the offender, reducing the amount of property stolen and giving staff time to get to a safe place and avoid injury.

“We are committed to preventing crime and victimisation and delivering a more responsive Police service so that we are the safest country,” he said.

Another 33 fog cannons are due to be installed this year. While they can cost about $4000, a Government subsidy means business owners contribute no more than $250.

The cannons, with other prevention measures, have seen a marked reduction in aggravated robberies, financial loss, and injuries to shop workers.