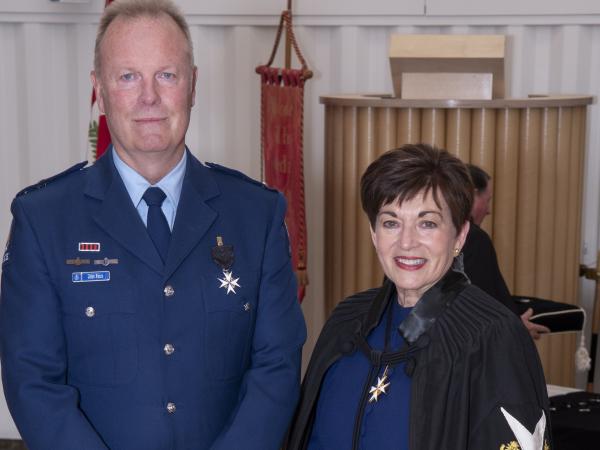 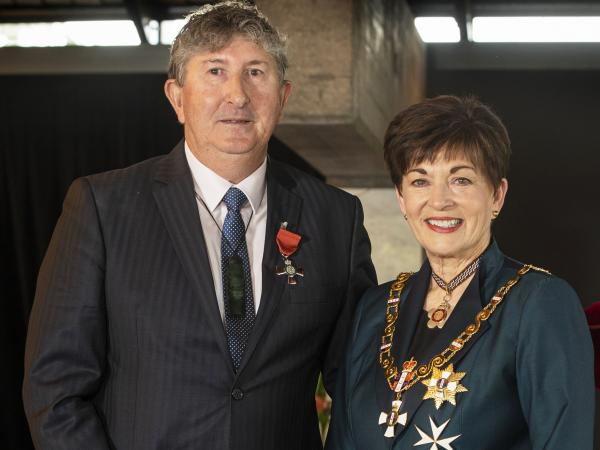 Years of leadership and dedication to policing in the Canterbury community have been recognised with awards presented by the Governor-General, Dame Patsy Reddy.

District Commander Superintendent John Price was invested as an Officer of the Most Venerable Order of St John (OStJ) in recognition of his commitment to relationship-building between St John and Police.

Former Detective Senior Sergeant Dave Harvey – known universally as Jack – received his award as a Member of the New Zealand Order of Merit (MNZM), bestowed in the Queen’s Birthday Honours.

According to the citation, John’s award reflects his active work “to build strong, collegial working relationships between St John and the New Zealand Police at all levels”.

His focus has been on open communication and he publicly acknowledges the St John community support presence and their contribution to community safety and reassurance, the citation reads.

“He has actively promoted the inclusion of St John in wider emergency services working groups both locally and nationally.”

The honour – which is approved by the Queen - is rarely given to police officers. Among previous recipients is former Canterbury District Commander Dave Cliff.

The news came as a surprise to John, who says he is humbled by the honour.

“St John plays a hugely important role in our community and I am privileged to be in a position to support them,” he says. “We share a common goal and we serve the same people, so working together is the right thing to do.”

Dame Patsy – Grand Prior of the Order of St John – made the presentation at the Transitional Cathedral, Christchurch, on Saturday 12 October.

The previous day she had presented a clutch of royal honours at Christchurch Town Hall. Among the recipients was former Detective Senior Sergeant Dave Harvey.

His investigations included the murder of Olivia Hope and Ben Smart in 1996 and the shooting at the Ashburton Work and Income office in 2014.

He was the New Zealand Police Liaison Officer following the 2002 Bali bombing. He worked for several years to build a relationship of trust between Police and the New Zealand Prostitutes Collective in Christchurch.

He also had a long-term commitment to developing training and mentoring his fellow detectives. He was instrumental in victim advocacy and after the 15 March shootings came out of retirement to work in a family liaison role.

At the time of his award he said it was an immense surprise and great honour. "I've been fortunate over the years to be part of some great investigative teams,” he said. “It’s essential to have victims at the centre of what we do, to have a clear investigative focus and a timely resolution.”