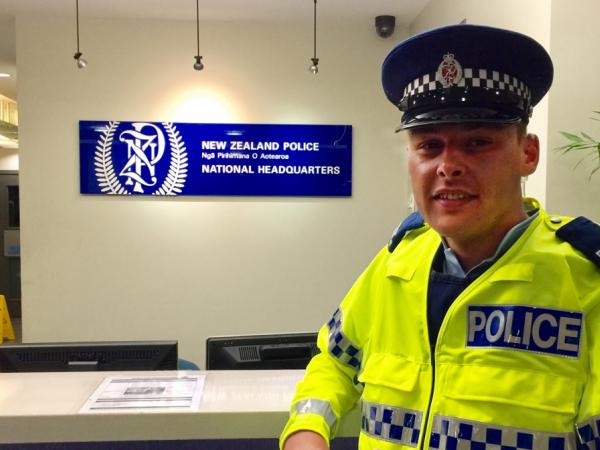 As a Police recruit on a ‘living classroom’ assignment in central Wellington, Josh Pollero couldn’t resist popping into the foyer of Police National Headquarters (PNHQ) – but this time he stayed the public side of the counter.

For two years Josh worked on the other side as concierge, becoming a familiar face to the hundreds of people working in or visiting PNHQ.

He also worked in firearms licensing and on secondment as an Executive Assistant before leaving to join Recruit Wing 304. He left the Royal New Zealand Police College (RNZPC) this month and is just starting his operational career as a Constable.

His father Phil served in Police in Taumarunui and Whanganui, retiring at the rank of Sergeant, but Josh had no particular plan to sign up when he started at PNHQ.

“I didn’t think I fitted the mould,” he says. “Then I met people there who convinced me I could do it.

“I realised there was no mould, and that Police need a wide range of people from varying backgrounds and experience to serve our diverse communities.

“I had to think ‘How do I go from being the person I am now to wearing the uniform?’

“Because of my father it was something I’d always wanted to do from the age of about five. But it was working at PNHQ that really got me into it.”

Before attending the RNZPC Josh organised a fitness and study group with other would-be recruits for mutual support and encouragement.

At college he was particularly impressed with the RIP – Revised Integrated Practice – sessions, which put recruits through a series of increasingly challenging scenarios.

“RIP 7 is a whole day of attending a variety of jobs. That’s where it all clicks, where you’re putting into practice everything you’ve learnt. It was a really good learning environment. It was awesome.”

Despite having been born in Hawke’s Bay and raised in Whanganui, Josh today starts work in Counties Manukau District. “I did two SCOPE assessments up there. I just loved it,” he says.

Previous
A champion track
Next
Our family journey