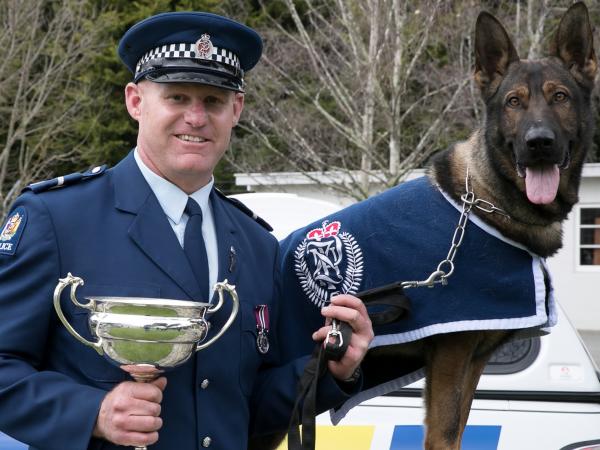 “I’m going to ******* shank you”. Advancing from the car roof, along the bonnet, screwdriver outstretched, the offender seemed in no mood to comply.

“I had no reason to believe he wouldn’t try,” says Senior Constable Blair Spalding. “I tried to use pepper spray but it was windy and he moved his head so it only glanced him.

“But it made him run. I released the dog and he caught him on the other side of the road.”

Blair and patrol dog Rush were responding to an early morning report of offenders interfering with a Toyota car in Thorpe Street, Hamilton, last month.

They tracked for about 2km over 20 minutes along footpaths, though a park, along roads, through a property, over a high fence and out on to Wairere Drive, then to Carrs Road, where they found two people breaking into a Honda.

“I challenged them,” says Blair. “One jumped into the driver’s side, the second got on to the car roof.

“I thought they’d comply because they seemed quite scared of the dog. The guy in the car stayed there. But the guy on the roof looked like he was weighing up escape options.”

Those options were limited, given Blair and Rush’s status as Police’s current champion patrol dog team. Blair, a dog handler since 2008, is full of praise for Rush   after a track worthy of a champ.

“It highlighted how good he is – one of the best tracks of my career,” he says. “It was like he was on rails. There was no break whatsoever.”

Rush refused to be distracted from the scent when Blair stopped to question a person who innocently crossed the track. “Rush just wanted to carry on.

“He’s a very good tracking dog. I love working with him.”

At two, Rush is Police’s youngest ever champ. He and Blair – whose first dog Yogi lives in retirement with his family - only graduated in June 2016.

The night provided a new experience for Blair after 19 years in Police. “I’ve been threatened plenty of times, and on occasions assaulted, but I’ve never had anyone present a screwdriver and threaten to stab me with it. That was a first.”

Next
Josh jumps the counter