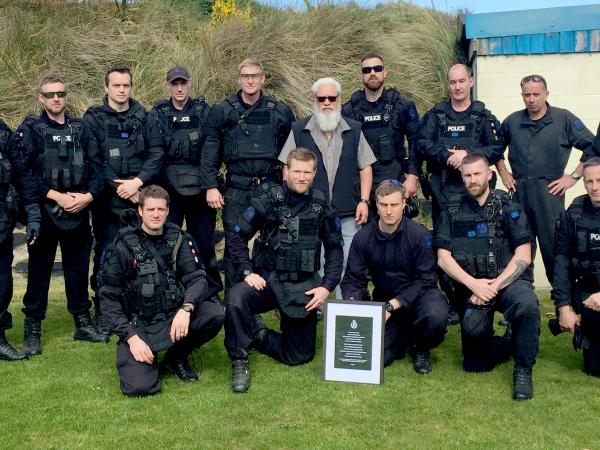 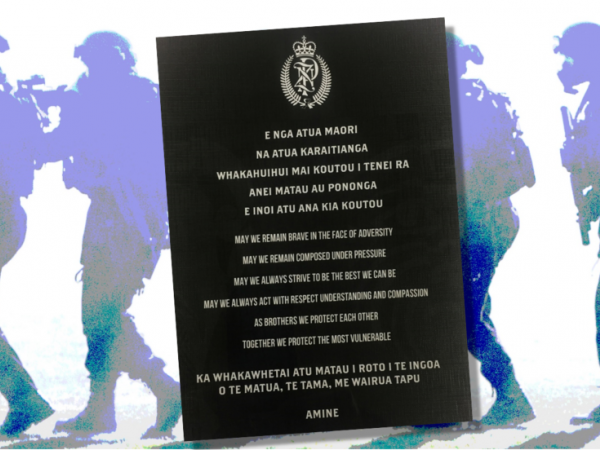 A karakia composed for Dunedin’s AOS team now has pride of place on the squad room wall.

The squad worked with Otago Coastal Area Police Kaumatua Hata Temo, who was instrumental in creating the karakia.

“The words capture the essence of what the squad is all about,” says Sergeant Jono Airey, who drove the project.

He consulted Senior Constable Toni Wall, Kaitakawaenga/Iwi liaison officer, who set up a meeting with Hata.

“I said we’d like to have a blessing or a prayer that’s unique to us; something that adds to our culture as a group,” says Jono.

“Hata said ‘If it’s going to be for you then you have to compose it. Go and write down what your group stands for and come back to me. I’ll add to it from there'.”

The finished karakia (text below) was framed and Hata recently blessed it and presented it to the squad. It now hangs on their squad room wall, next to the armoury.

Rather than translating the English words, Hata added spiritual elements in te reo Māori at the beginning and end.

‘It’s unique to us and it’s something to be proud of,” says Jono, a member of the squad for around four years. “It outlines our values as a squad.

“It reminds us of why we are here and it connects us to our region and to all our people in a spiritual sense. It also adds to the strong bond and culture that we have down here amongst our squad.

“I wasn’t sure what the support would be like initially, but it has struck a chord with everyone and I’m quite proud of that.”

Hata - Kaitohutohu Māori/Māori Advisor in the Office of Māori Development at the University of Otago - says the request for a karakia showed a degree of understanding of Māori culture.

"I was glad to help them out," he says. "We have karakia for a lot of things. When they approached me to make one for them I thought it would be a good opportunity, especially because of the work they do and the desire for the safety of the squad."

Toni says the strength of the karakia comes from the fact that at its heart it is the squad’s own words.

“I think what they came up with was pretty exceptional,” she says.

MAY WE REMAIN BRAVE IN THE FACE OF ADVERSITY

MAY WE REMAIN COMPOSED UNDER PRESSURE

MAY WE ALWAYS STRIVE TO BE THE BEST WE CAN BE

MAY WE ALWAYS ACT WITH RESPECT, UNDERSTANDING AND COMPASSION

AS BROTHERS WE PROTECT EACH OTHER

TOGETHER WE PROTECT THE MOST VULNERABLE