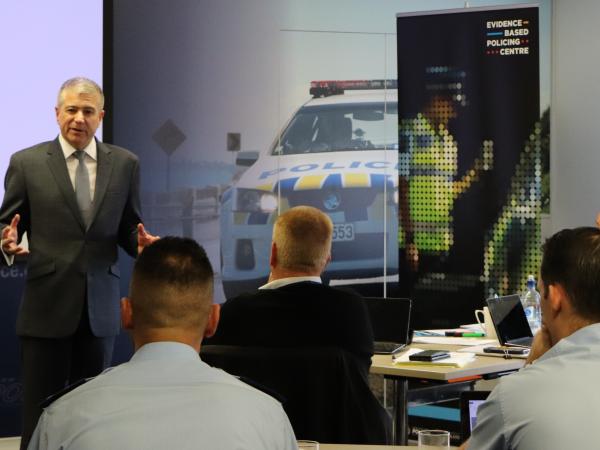 This article by DCE Service Delivery Mark Evans was published this week on the British website Policing Insight.

In December 2018, New Zealand Police established the Evidence-Based Policing Service Centre – the first of its kind in the world – as a place to provide a better understanding of what works, what doesn’t, and what guides officers on the front line.

Having led the work to establish the Centre, Police’s Deputy Chief Executive Service Delivery Mark Evans explains why it was set up and how Evidence-Based Policing looks to help New Zealand be the safest country.

In a New Zealand context, Evidence-Based Policing (EBP) uses research, crime science and problem-solving methods to guide and inform the choices of decision-makers with approaches and tactics proven to reduce harm.

At New Zealand Police, we’ve been encouraging this approach to problem-solving through our deployment model on the front line for a number of years as part of our mission ‘to be the safest country’.

But to really create a step change in capability and to ensure everyone – from our public-facing call-handlers and constables to commanders and senior leaders – has the best possible understanding of ‘what works’, we invested in a dedicated EBP capability to act as a catalyst for further transformation.

As part of the wider ‘Policing 21’ New Zealand Police Transformation Programme, the Evidence-Based Policing Service Centre (EBPC or ‘the Centre’) was established last year to help focus our efforts on the areas that effectively prevent harm and have the greatest impact on our other policing priorities.

The EBPC brings together a range of key Police functions that had previously been spread across multiple groups (such as Performance and Research Insights, Service Design, Continuous Improvement, and the Mobility Innovation and Experience Lab). In addition, a range of new positions and capabilities have been created, including the first Director of Evidence-Based Policing and EBP Lead Practitioners across the 12 Police Districts, and the Police Behavioural Insights function.

Critically, the Centre was set up in conjunction with external partners, including forensic and science experts from the NZ Institute of Environmental Science and Research, the New Zealand Institute for Security and Crime Science at the University of Waikato, and technology partner Vodafone NZ.

The ultimate goal of the Centre is to embed EBP principles and practices into the everyday work of each Police employee. A number of upcoming initiatives are set to drive its success and integration, including critical thinking and decision-making courses for new recruits, an EBP portal that presents the latest research and data as practical frontline advice (available to all officers on their smartphones), and the expansion of an awards programme that recognises exceptional examples of EBP in action.

The EBP Lead Practitioners – or ‘station champions’ – will arguably be one of the most important contributors to the success of the Centre. These leads are set to facilitate EBP on the front line, influence staff who are apprehensive about the application and benefits of EBP, and collect on-the-ground information and intelligence to improve EBP’s continued implementation.

Despite still being in its infancy, the EBPC has already undertaken a number of research projects. Most significantly to date, the Centre was called upon to assist the largest Police investigation ever to take place in New Zealand – the 15 March Christchurch terrorist attack and the subsequent community reassurance operation.

The EBPC was tasked to review and research existing international ‘best evidence’ that could enhance prevention, reassurance and resilience efforts in our communities. Within 48 hours, the team used a range of tools to pull together literature from around the world. Additionally, they investigated the best way to communicate with communities after the terror event and provided key insights that informed the Police Executive on the topic of general arming of Police following the attack.

Demand for new insights is growing rapidly, with more than 100 briefs in the EBPC pipeline. These include replicating a Western Australia experiment into ‘hot spot’ policing and investigating the use of portable drug testing devices for use by frontline officers. Other projects include research into fleeing drivers and working with partners on issues ranging from family harm to testing drug levels in wastewater.

A key requirement of the EBPC is to ensure research is translated into tangible outcomes for our staff and the community. For example, we recently learned a particular group of first-time offenders are at the greatest risk of reoffending within a 28-day period immediately after their initial arrest. While that’s an important guiding insight, it isn’t necessarily straightforward to turn into action. That’s why we’re now testing specific support initiatives and resolutions to see what practical steps our officers can take to reduce this risk and better prevent reoffending.

All EBPC initiatives have the potential to make a real difference to policing. With this in mind, the EBPC strongly aligns with the NZ Police High Performance Framework, a major organisation-wide initiative delivered to more than 12,000 staff that seeks to foster a style of leadership focused on enabling our people to be the best they can be. EBP gives frontline officers and leaders alike the assurance that their approach to policing is based on evidence, research, good problem-solving and best practice, rather than assumptions, tradition, or subjective impressions. Simply, it empowers our people and strengthens Police’s already positive culture of learning and innovation.

The EBPC is laying the foundations that, over time, will enable our staff to have a better understanding and more confidence to take the best, most informed course of action. For example, EBP has a presence within the newly opened Learning Centre at the Royal New Zealand Police College – a visual demonstration of how ‘evidence-based thinking’ will be integrated within the training curriculum.

But it’s not just about transforming our Police service. We think we have something to contribute to the development of ideas and practice in policing further afield, and with plans to develop national and international partnerships to work collaboratively on future initiatives, we’re hoping that the EBPC’s influence will extend well beyond New Zealand. We’d like to run experiments and projects in New Zealand that may align with work being done elsewhere, and we’re interested in hearing from practitioners who think we may have something to contribute to the international body of science and criminology research.

The overarching New Zealand Police plan is set out in a one page document – Our Business – that is widely understood across the organisation. Having a world-leading police service requires many things to be successful, and we think that by embedding ‘best evidence’ into our daily business, we can have a profound, positive and lasting impact on policing in and beyond New Zealand.