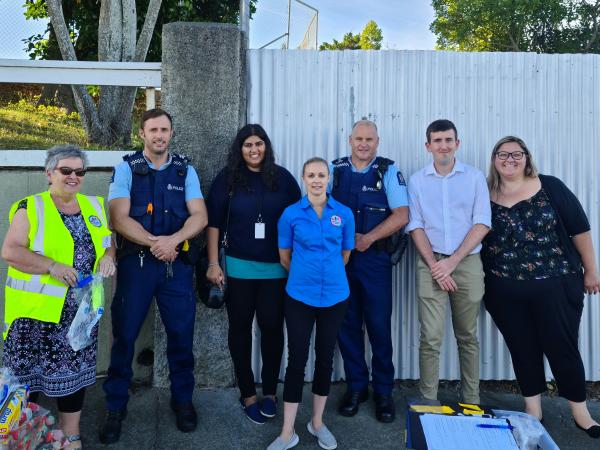 The old adage ‘safe as houses’ is being taken to new heights in Napier where Police have joined forces with the local council and other organisations to create a Safer Napier.

The visits are held during the summer months and a decision on which areas to target is agreed between key stakeholder agencies.

Council Community Advisor Tanya Jain says where they visit often depends on what has been happening in the city.

“We usually focus on areas suggested by the Police where there has been some issues or recent crime," says Tanya.

"It’s all about getting people within neighbourhoods to connect and understand what support is available to them, and what their role is in keeping themselves and their community safe."

She says a leaflet drop advises neighbourhoods of the upcoming visit and, on the day, representatives from all the organisations door knock and speak to locals about everything from Civil Defence preparedness and installing smoke alarms to crime prevention and how to report a crime via 111 or Ten-five (105).

“At the end of the home visits Police put on a barbeque which brings the community together. It is about starting conversations about safety in different areas of their daily life and building on connections within neighbourhoods.”

Napier Police Community Relations Coordinator for Ahuriri, Sergeant Scott Munro says it’s a fantastic initiative that lets people know what help is available to them and connects them with their neighbourhood.

“It means people get to know others in their street and in times of need they may reach out to each other. It’s especially good for older people or those living alone. I believe it builds healthier streets In Napier – both physically and mentally,’ says Scott.

He says the barbeque at the end of the visit is an important element of the initiative.

“It not only brings the community together, but it breaks down barriers and allows people to connect with Police and really get to know us on a different level.”

Tanya Jain agrees with Scott and says six years on from when the initiative began the feedback from communities continues to be positive.

“People tell us they value the visits and enjoy connecting with their local police officer.”