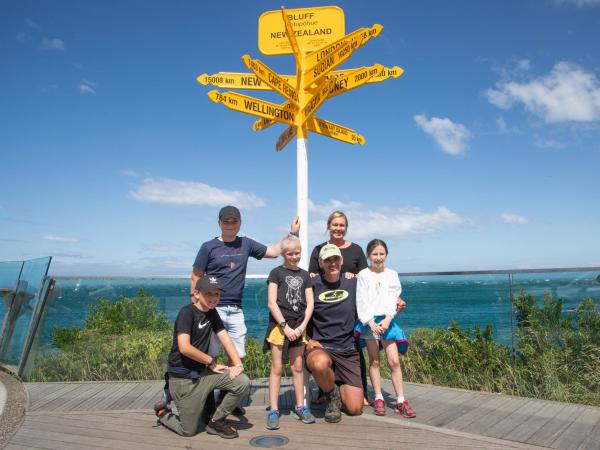 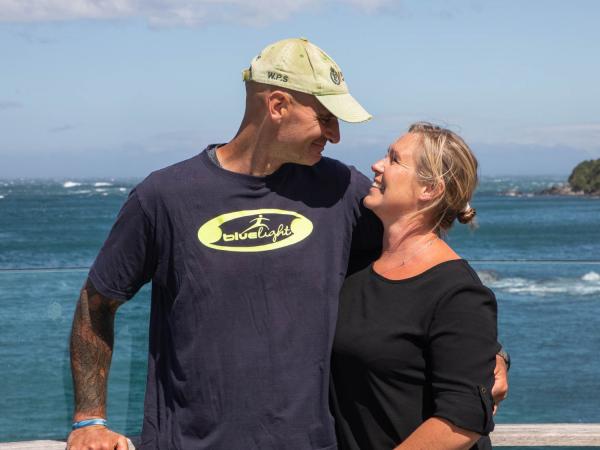 Home > News > Ten One Magazine > From North to South, the hard way

Constable Gary Hayes crossed the finish line today (Friday 21 February) after an epic, near four-month trek the length of the country for Blue Light.

Gary, from Whangārei, set out from Cape Reinga on 1 November and reached the iconic Bluff signpost at the other end of the 3000km Te Araroa Trail – five million-plus steps later – this afternoon.

He awoke this morning in Invercargill and walked the final 30km accompanied by local Police staff, Blue Light branch members, school children and other supporters.

He was surprised and delighted to find his wife Vicky waiting for him. They last saw each other just after Christmas.

"When I reached Bluff Primary School the whole school came out to cheer me along.

"A small group of kids volunteered to help me the rest of the way through. That was a real highlight.”

Gary, who works in court and custody at Whangārei District Court and is a member of the SAR squad, was walking to raise awareness of Blue Light’s work with young people – especially those at risk or facing disadvantage – through its 68 branches nationwide.

He is also raising money for Northland Blue Light through a Givealittle page, with the ambition to raise a dollar for each kilometre walked.

Gary had anticipated taking four-and-a-half months to complete the walk, so was delighted to beat that by a clear two weeks or more.

He has experienced everything the trail could throw at him, from searing summer heat to freezing conditions on the peaks. He has battled thick bush, forded raging rivers, suffered blisters, wasp stings and sleepless nights. In Auckland he took a detour to slog his way up 1,267 stairs at the Sky Tower.

Highlights have been the friendships made along the way, and the times supporters walked along with him. This included walking the Queen Charlotte Track with Vicky and sons Carter, 11, and Connor, 9. The lowlights were long periods of loneliness, when days might pass without meeting another human being.

Gary says he was fuelled by a desire to not let Blue Light and his supporters down - and daily cups of his ‘plutonium’ coffee.

“With a little help and luck I want to give an opportunity to allow our youth of today to strive to do more for themselves and give them the confidence needed to step forward into their future with a can-do attitude,” says Gary.

He won’t be able to have his feet up for long – he’s due back at work on Monday.

Gary has documented his journey through his Facebook page – see links below to find out more.

Previous
Picture this! Kids draw a policing career
Next
Lifeline for desperate family