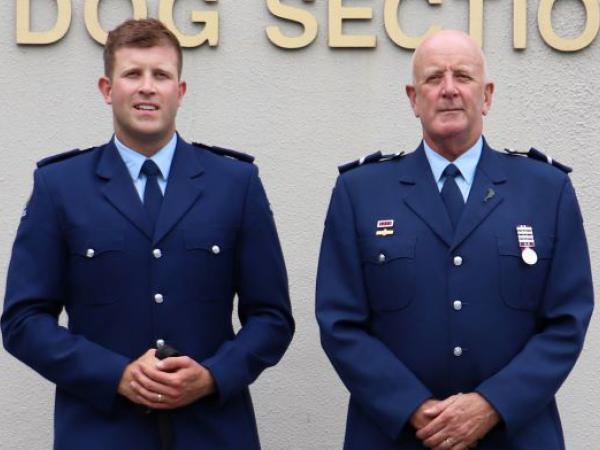 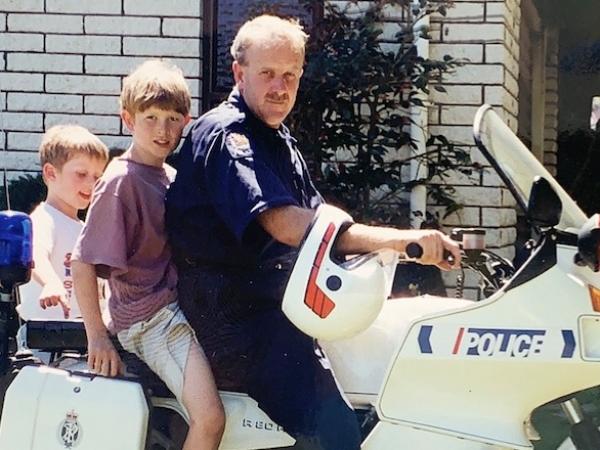 Home > News > Ten One Magazine > Passing it on - fathers, sons and dogs

Policing runs in families. And in some cases, it runs, jumps, chases offenders, sniffs out drugs, weapons and cash, and loves a good ear scratch. Over the coming weeks, Ten One talks to families with a common calling – police dogs.

Senior Constable Bruce Lamb is one of New Zealand Police’s longest-serving dog handlers. Now his son Michael has graduated as a dog handler with patrol dog Griffen, aka Griff.

Bruce joined Police as an 18-year-old 43 years ago and became a dog handler in 1987. Since then he’s had six patrol dogs, three of which were AOS-trained.

Michael and Griff graduated from the Dog Training Centre at Trentham this month. Becoming a dog handler was a long-held ambition, and Michael had fostered a patrol dog and a detector dog before fostering and training Griff.

Bruce says he gets asked all the time about his best catches but that the ones that matter most to dog handlers are not necessarily the high-profile ones.

“It’s about how successful the dog is – the longest track,” he says. “You might find someone who stole a bike after a two-hour track, or you might find a more serious offender who’s only gone four feet away hiding in a bush.”

These days he works detector dogs. His first detector dog, Mylo, is now retiring and he’s working with Luther, a young black Labrador.

For a detector dog handler, he says, the best catches are the ones where the dog picks up drugs that human officers may not have found alone. “Not long ago Luther got $168,000 out of the lining of a car door.”

The switch to detector dogs was one he always planned to make but it came sooner than expected. His last patrol dog was Gage, one of only two New Zealand dogs to have been awarded the PDSA Gold Medal for bravery.

On 13 July 2010, Bruce and Gage were executing what should have been a routine drug warrant in Phillipstown, Christchurch, when Bruce was shot in the jaw and knocked to the ground.

As the offender pointed the firearm at him, Gage leapt toward the offender from behind Bruce and was shot. The offender turned his gun on Constable Mitch Alatalo, shooting him in the leg.

Bruce has been shot at during three other incidents. He was also first on the scene at one of New Zealand’s first active shooter events, where a man was shot at random in Cathedral Square in 1989.

You might think having a father with such a history could put someone off a Police career. But two of the three children Bruce and wife Jill - also a former officer – raised have followed in his footsteps.

“When Michael went to the Royal New Zealand Police College in 2015 a lot of people asked whether he knew what he was getting into,” says Bruce. He did.

“As a young fella I especially remember the feeling of comfort knowing that Dad and his dogs were out there catching 'bad guys' so I would be safe,” says Michael. “Now I hope Griff and I can pass that feeling on to others.

“Dad has a good reputation in Police as the guy who’s always getting stuck in and loves catching crooks.

"Over his career he’s attracted his fair share of hairy situations, but that’s what happens when he applies himself to his work like he does.”

Bruce’s other son Christopher is currently working as a detective constable in Auckland City District.

“Growing up around Dad and seeing someone that was respected by us kids, who was respected by the community and who just loved going to work, meant joining Police was never a hard choice for me,” says Christopher.

“He loves his career and now I’m loving mine. When I was frontline and Dad was at work it was always funny and quite cute that when I got assigned a job, and Dad was not busy, DOGS 16 would perk up on the radio and say they could ‘float that way’.”

He says having three immediate family members who were, or have been, in Police is the best support network.

“I know I’m going to be waking up to phone calls from Michael after he’s caught someone from an ‘amazing’ track.”

Previous
Do you know these good Samaritans?
Next
‘It’s a great job – I have no regrets’