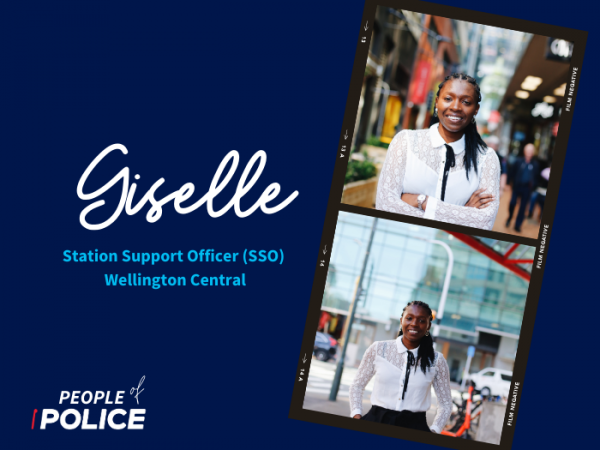 I am 23 years old and a Victoria University graduate. I am originally from Rwanda and was born in a refugee camp in Malawi, as a result of the genocide against the Tutsi and the civil unrest in Rwanda at the time.

Our journey to New Zealand was not easy, it was full of many downs, but in 2007 my family received the greatest news that we would be settled in New Zealand. We arrived and spent one month in the Mangere Refugee Resettlement Centre in Auckland.

At the time, I was 10 years old and did not know or understand New Zealand culture and its norms. As a result, I experienced a lot of bullying being one of only two black students at school. However, I have come to appreciate that being different is positive because it means that I have a unique experience.

My journey with Police is a short one. In 2019, I was given the opportunity to work on the Firearms Amnesty and Buyback Team as an administrator for six months. At the beginning of 2020, I received another opportunity to work as a casual Station Support Officer across the Wellington District, which later turned into full-time employment.

My role as an SSO is exciting and every day is different, which is why I enjoy the job.

The role of an SSO is a combination of customer service and administration. At the front counter we are dealing with the public, assisting them with different things such as taking reports of crime, reuniting found property to its owners, processing exhibits, answering general queries, and giving people crime prevention advice.

This year, I was asked to assist the Ethnic Liaison Officer and his team on Africa day. This was an opportunity for me to represent New Zealand Police and inspire others in the African community that it’s possible to be female, a former refugee, African, black, and work for the New Zealand Police.

Previous
Heartfelt welcome for Tasman’s new MRM
Next
A homecoming